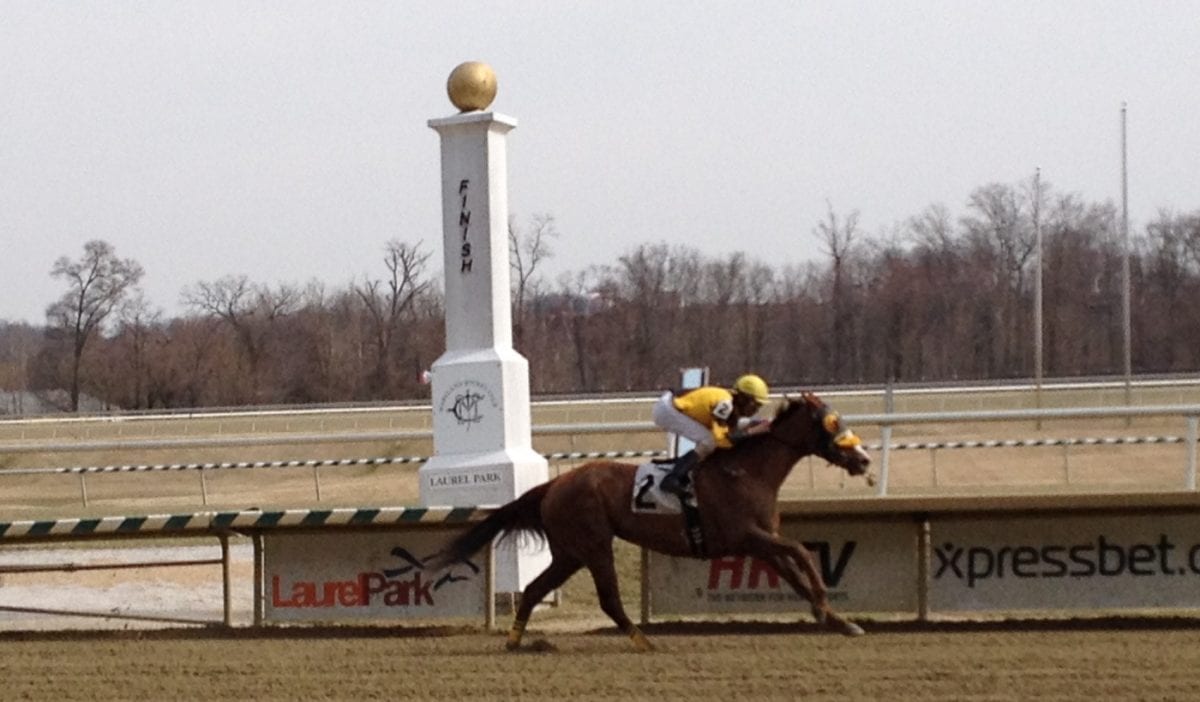 From a Charles Town release by John Scheinman

The Sugar Maple, a seven-furlong race for fillies and mares 4-years-old and up, attracted six stakes winners this year. The race is part of a $100,000-guaranteed All Stakes Pick 4 that climaxes with the sixth running of the Grade 2, $1.5 million Charles Town Classic.

The other two races in the Pick 4 are the $100,000 Robert Hilton Memorial presented by Budweiser for 3-year-olds and the $50,000 Confucius Say Stakes for West Virginia-bred 3-year-olds and up. Post time for the Sugar Maple is 9:45 p.m. EDT.

My Pal Chrisy, trained in Florida by Martin Wolfson, can pass the $1 million career earnings mark if she can score in the Sugar Maple under jockey Joel Rosario. The 6-year-old daughter of Alex’s Pal has made 43 of her 46 starts at the principal Florida tracks – Gulfstream Park, Calder Race Course and Tampa Bay Downs – and has not finished off the board in her past 11 starts.

Included in that run were three straight scores in stakes races last summer.

My Pal Chrisy, who will be ridden by Joel Rosario, raced exclusively at Gulfstream Park this year until Wolfson elected to go to the Sugar Maple. She opened her 2014 campaign with a second-place finish as the beaten favorite in the Sunshine Millions Filly & Mare Sprint Stakes, and followed up with a second in the Awesome Feather Stakes and then placed second again in the Grade 2 Inside Information at seven furlongs.

Maryland-based trainer Larry Murray will send 5-year-old homebred mare More Than a Cruise in of a commanding 3 3/4-length score in the Conniver Stakes for Maryland-breds on March 22 at Laurel Park. In that race, the daughter of More than Ready lagged 10 lengths behind the leader before storming up and winning going away under a hand ride. Like My Pal Chrisy, she has not finished off the board in her past 11 starts, but More Than a Cruise’s streak dates back to June 2012.

“She’s always been very productive,” Murray said. “She has a lot of seconds, and [Laurel in-house handicapper] Gabby [Gaudet] said, ‘You’ve done a great job spotting because she’s second so many times.’ I said, ‘Some people say I haven’t done such a great job because of the seconds.’”

More Than a Cruise has four victories from 20 starts with eight second-place finishes. This will be her first foray into Charles Town.

“Seven-eighths is her best distance at Laurel, and it’s completely different at Charles Town,” Murray said. “It’s more like a mile and a sixteenth. . . . Horses change as they get older. She’s kind of push-button and will do what you want. She’s not going to burst out of there and go as fast as she can as far as she can. You have to push the button.”

Tom Amoss, one of the leading trainers in Kentucky and Louisiana, hopes his Quiet Success can make some noise off of back-to-back wins at the Fair Grounds and Delta Downs in her two most recent starts.

Delta Downs, like Charles Town, features a six-furlong oval, and in her most recent start Quiet Success obliterated a field of eight by 9 3/4 lengths at the Sugar Maple distance.

The filly was second in the Grade 3 Debutante Stakes as a 2-year-old at Churchill Downs, and Amoss hopes she is finally beginning to realize her promise.

“It’s a bit of a gamble, but the configuration fits and we’ll see how it goes,” Amoss said. “Looking at Quiet Success’ 2-year-old year, she showed raw talent and promise, and it took her a lot time to come back to that. Mentally, it took a lot of time for her to mature. That was a long process with her.”

Saturday Suprise, coming off a sharp allowance score at 6 1/2-furlongs at the track, will try to pull off a hometown upset for local trainer Jeff Runco. The 4-year-old daughter of Any Given Saturday has won four of 16 starts while finishing on the board 12 times. She has been a tremendous success for a $10,000 claim.

“She’s doing good,” Runco said. “I’m sure it’s going to be a very competitive race. She’s done great since we claimed her. She’s improved on the numbers every time out.”

Saturday Nthe Park, who will have the riding services of Hall of Famer Kent Desormeaux, ships in after five races at the Fair Grounds this past winter. Now trained by Tevis McCauley, the speedy-but-tractable daughter of Any Given Saturday won races in January and February then was beaten by a nose in her most recent start, the Mardi Gras Stakes, a 5 1/2-furlong event scheduled for the turf but run over a sloppy track.

Maryland-based Flattering Bea, whose four victories include three at Charles Town, ships in for trainer Crystal Pickett. She finished second, beaten by a nose, in the Miss Preakness Stakes last year at 52-1 and took the Miss Shenandoah Stakes as a 2-year-old at Charles Town.

After a troubled start when sixth in the Grade 2 Barbara Fritchie Handicap at Laurel Park, Flattering Bea recovered in her most recent outing to place second behind Rusticana in a race at Mountaineer Park.

Rusticana, a 5-year-old daughter of Pioneering, has been in training at Keeneland while making her past four starts at Mountaineer. The Sugar Maple will be her second stakes start in a 30-race career.

Wardelle, Prize Winner and Kalambaka Queen round out the body of the field with La Grey Zuliana on the also eligible list.