The Racing Biz has been tracking claiming activity in the mid-Atlantic region and reporting on it weekly for the last several months, in our Claimbox report.  We continue that, along with our Midlantic Claiming 7 — the trainers who have been busiest over the prior 30 days, ending in this case on April 15, 2014.


It was the second busiest week of claiming — by both volume and dollar value — in the last nine months in the mid-Atlantic last week.  Nonetheless, however, there was little change in the Midlantic Climaing 7.

Charles Town-based trainer Ronney Brown remained atop the Claiming 7.  His 12 claims are one more than Scott Lake and two more than John Locke atop the list.  Lake topped the leaderboard in the value of his claims, with his 11 claims having been worth a combined $126,000.  Patricia Farro’s eight claims had the highest average value, $12,875.

Pimlico-based Kieron Magee entered the list in seventh place.  He’s made six claims in the last 30 days, two in the last week.  Those half-dozen claims have a combined value of $76,000.  He replaced Ramon Preciado.

By every metric, claiming activity jumped during the week ending April 15.  Indeed, it reached heights seen only once before in the last nine months, and that in September.

Pimlico took over the top spot as the region’s busiest track.  Twenty-seven horses changed hands in Baltimore with a combined value of $429,000 (average: $15,889).  Parx Racing was second in all three categories, with 21 horses worth a combined $271,500 (average: $12,929) claimed.  Twenty horses were claimed at Penn National, and 10 switched barns at Charles Town.. 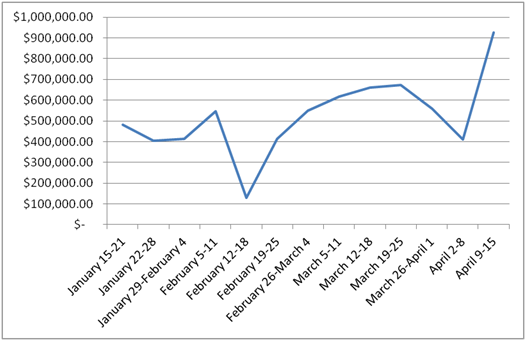