Colonial asserted those positions in a letter to the HBPA signed by the company’s president, Ian Stewart.

In a follow-up release, Colonial Downs outlined a vision of Virginia’s racing future centered around “a six-day Virginia Derby Festival every September with purses averaging over $500,000 a day.”  That vision involves fewer live days with higher purses and better-quality racing.

Noting that the HBPA, the state’s horsemen’s organization, does not share its enthusiasm for what the company terms a “bold paradigm change to high quality Thoroughbred racing in Virginia,” Stewart said in his letter that it “is time for Colonial Downs to move on and work with the thoroughbred horsemen who want to work with us.”

Colonial had previously offered to the horsemen three different scenarios involving a hybrid of higher-end and lower-end racing.  There have been several recent exchanges of proposals between the VHPBA, the entity designated to represent Virginia horsemen, and Colonial Downs, which holds Virginia’s sole unlimited racing license, since a stubborn stalemate developed over racing days at the beginning of the year.

The proposals offer a scattered calendar of dates that would allow horsemen to start horses multiple times at Colonial Downs during the summer and fall seasons, an objective of priority for the VHPBA.  At the same time, though, they would turn the Colonial meet essentially into a ship-in meet, since the live days would be so widely spaced.  Two of three original proposals made in March are revealed in Colonial’s letter, which offer between 23 and 27 days of live racing annually.

What appears to be anchored in each proposal is a mini-boutique meet comprised of three-day racing weekends during the first two weeks in September.   Other racing days for lower level racing could occur during the fall harness meet and/or over intermittent weekends throughout the summer, such as Father’s Day weekend, Independence Day weekend and other larger traditional racing days in previous meets at Colonial Downs.  Colonial says that it would also support the use of purse money for racing at other venues in Virginia, largely steeplechase meets such as the Gold Cup and International Gold Cup in The Plains.

The VHBPA had countered on March 31st with a proposal that offered eight three-day weekends of racing concluding with a three-day festival of racing with heightened purse levels that would include the Virginia Derby.  In his letter, Stewart judges that response “half-hearted and insincere.”

But Frank Petramalo, the Executive Director of the VHPBA, said in an interview Colonial’s proposals are non-starters.  The notion of “stacking” the harness and thoroughbred dates — that is, running the meets concurrently — is, he said, “filled with problems.”

“First, the dirt course is unavailable because of its use for harness racing during the meet, which limits training to a few lanes on the turf if there isn’t any inclement weather,” Petramalo pointed out.  “Second, there are issues with Thoroughbred horses that arise when the two breeds are integrated, and third the meet overlaps with the Laurel meet, which severely impacts manpower such as the starting gate crew.” 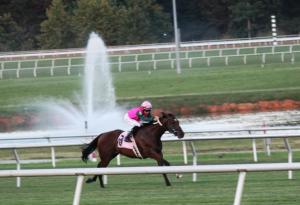 Racing at Colonial Downs for nearly the last decade has been largely comprised of full fields of horses in what Stewart calls “mediocre races,” such as $5,000 claimers or $7,500 maiden claiming races.

Petramalo cites a formula that has been used in the past where accumulated purse money is divided by $200,000 to determine the number of days.  Rebates on the 5% commission that the VHPBA receives on wagered dollars have been used to expand off-track facilities and account wagering in Virginia in the past to increase revenue.

Petramalo claims that Colonial has unilaterally changed the standing agreement.

Colonial counters that it was the HBPA’s own actions which created the current impasse.  Colonial points to the HBPA’s refusal to accept the Virginia Racing Commission award of a 25-day meet in a five-week structure, a “status quo” of the 2013 summer meet.  The 2013 meet offered slightly higher purses but resulted in attendance and handle downturns of nearly 25% each.  A Commission-led proposal of a 21-day, seven-week meet was accepted by the VHPBA but declined by Colonial Downs.

In the Colonial letter, the sole track operator in Virginia states that “there is nothing to be gained from further discussion with VHPBA,” and hints of working “with thoroughbred horsemen in Virginia who share our vision.”

The letter alludes to announcements to be made in “the near future.”  Those announcements are expected to concern the formation of a new horsemen’s group, currently being organized by Mark Deane.   Deane, now affiliated with Colonial Downs, is a former trainer and owner in Virginia and previously was employed by the Virginia Thoroughbred Association in the position of Field Director.

That organization, observers say, could attempt to obtain recognition as being empowered to represent that state’s horsemen, forcing out the HBPA.  Were it to succeed in such an effort, the organization would solve one of Colonial’s major problems, a problem which track owner Jeffrey Jacobs acknowledged in the release.

“We recognize that creating a new direction in Virginia Thoroughbred racing without a horsemen’s contract and without the ability to send and receive a racing signal is an uphill battle,” he admitted, “but is a battle worth fighting.”

Perhaps so, but the costs may be high.  “There may be no Thoroughbred racing in Virginia for several years,” Jacobs said in the release.

Colonial recently held its Dogwood Races event on April 5th, with an attendance of approximately 3,000 racegoers who wagered an estimated $22,000 over 4 steeplechase races and a training flat.

The question now is whether those will be the only races involving Thoroughbreds to take place in New Kent this year.