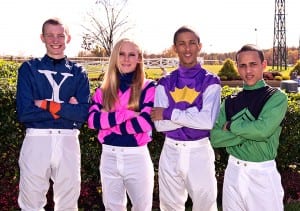 But sometimes that fact is brought home more clearly than others, like last month when popular journeyman jockey Anne Von Rosen suffered a serious spinal injury resulting from a spill during a Quarter Horse race at Turf Paradise in Phoenix.

The accident and Von Rosen’s resulting injuries are the epitome of catastrophic.  But the insurance policy carried by the track for just such an occurrence — $500,000 at Turf Paradise — is already considerably less than necessary to cover Von Rosen’s financial needs.

That’s a real concern for Jockeys’ Guild national manager Terry Meyocks, whose organization responded by calling for all tracks to carry a $1 million catastrophic injury policy — at the minimum.

“In the first two weeks since her accident, Anne’s medical bills are over $600,000 and she’ll need more surgery,” Meyocks said in an interview. “We all know injuries can occur and it’s a dangerous sport. But we need to make sure they’re taken care of and their needs are met, and take steps to prevent future injuries.”

In terms of insurance coverage, jockeys plying their trade at mid-Atlantic tracks are better off than most. Meyocks said the Guild is aware of approximately 10 to 12 tracks in the United States that carry less than $1 million in catastrophic injury coverage, mostly at facilities with short meets and none in the Mid-Atlantic.  So in that sense, the Guild’s call to action wasn’t aimed at this region’s tracks.

In workers’ comp states, for purposes of insurance, riders are treated like employees.  When they are injured, they are entitled to wage replacement and medical benefits.

In Maryland, for example, horsemen are required by law to provide workers’ compensation for riders, the Maryland Jockey Injury Compensation Fund.  In recent years, the money to cover the premiums has come from a combination of a surcharge on top of horsemen’s license fees and money from the purse account.  The actual purchaser of the insurance policy is essentially the state Racing Commission.

Even in Mid-Atlantic states like Delaware, Pennsylvania, Virginia and West Virginia, where jockeys are considered independent contractors and thus ineligible for workers’ compensation coverage, Meyocks said the $1 million catastrophic policies his group advocates are already in place at those tracks.

Compared to just a decade ago, track-provided insurance policies have significantly grown. In 2005, newly-licensed jockey Shannon Campbell sustained the same type of catastrophic injuries as Von Rosen during a race at Hollywood Casino at Charles Town Races.  Campbell suffered a severe spinal injury and was paralyzed from the waist down. The track’s coverage, then fairly standard for the industry, was $100,000.

The Guild provides its own safety net to members with an accidental death and dismemberment benefit, in addition to weekly temporary disability payments for two years. Qualifying permanently disabled jockeys can also receive Guild-provided supplemental reimbursements and a life insurance policy, and injured jockeys, including non-Guild members, can receive benefits from the Permanently Disabled Jockeys Fund.

Still, the irregularity of coverage among Mid-Atlantic states is cause for concern to Meyocks. Jockeys often ride at tracks in a number of states, some with workers’ compensation in place and some without, meaning the location where a potential catastrophic injury takes place will have an inevitable factor in the amount and quality of coverage an injured jockey can expect to receive.

New York’s move in 2007 to establish its Jockey Injury Compensation Fund provided workers’ compensation coverage on a blanket basis for jockeys in that state, with all licensed trainers and owners in New York required to contribute to cover the cost of the premium.  New York served as a model for New Jersey, as well as California and Idaho.

Ideally there needs to be workers’ compensation everywhere. If you include the exercise riders and people on the backstretch, that’s beneficial to the horsemen.” — Terry Meyocks[/pullquote]

States where jockeys still fall under the defined “independent contractor” definition have their own insurance benefits in place for injured jockeys. The Delaware Jockeys’ Health and Welfare Benefit Fund, for instance, provides health and welfare benefits for active, disabled and retired jockeys as well as their families in that state. The Delaware Thoroughbred Racing Commission manages that fund, which draws annual contributions from Delaware Park, purses, mount fees and monthly premiums assessed to jockeys.

Ultimately, the next time the inevitable strikes and another on-track catastrophic injury does occur, Meyocks hopes the victim need not be concerned with the location of the incident — in Von Rosen’s case, Turf Paradise officials moved quickly to upgrade its coverage to $1 million for the remainder of the meet by agreeing to purchase supplemental insurance and further pledged to buy a new policy for $1 million in coverage for the 2014-2015 meet. It’s another positive step, but the Guild remains committed to advocating for universal workers’ compensation coverage.

“We need to be working together throughout the entire industry to make sure that jockeys and even exercise riders, if they get injured they’re taken care of,” Meyocks said. “It’s in everybody’s best interest to work together on this.”