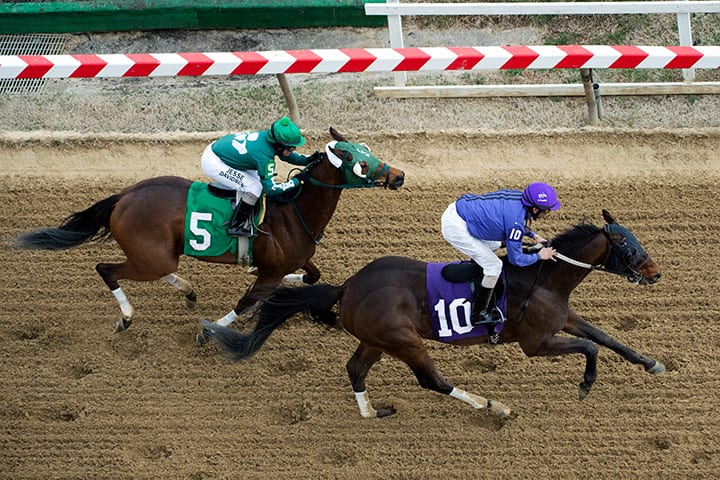 “It is nice to get off to a good start. I was on some live horses,” Pimentel said. “I like the switch from Laurel to Pimlico. We have been at Laurel for seven months. The track is different so it takes some time to adjust.”

The marquee race meeting of the year kicked off this afternoon with overcast weather but it did not dampen a buzz of anticipation from an enthusiastic, opening day crowd of 3,283.

The 35-day spring meeting will feature live racing on a Thursday through Sunday schedule (with holiday exceptions) through Saturday, June 7. The signature race of the stand is the 139th Preakness Stakes, the middle jewel of the Triple Crown on Saturday, May 17.

Ben’s Cat is looking for his fifth consecutive victory in the Mister Diz. The King Leatherbury homebred is the overwhelming 1-5 morning line favorite against eight challengers.

The gelding has earned more than $500,000 in earnings for three consecutive years and ranks eighth on the all-time Maryland-bred list with $1,862,640. He is 24-of-37 lifetime with three Grade 3 scores.

Pimentel will be aboard him for the 26th time. The duo has combined to win 16 times.

“I worked him last Saturday and he doing well,” Pimentel said. “He is very popular around here and there is just something about him. He is a really unbelievable horse and has matured so much throughout the years. He can be close to the pace or if they are going too fast up front sit back and make that one move when he sees the horses in front of him and wants to go get them.”

Steady N Love is the even money choice in the Twixt. The Gary Capuano trainee comes into the race off a score in the Caesar’s Wish Stakes at Laurel last month.

The wide-open Dahlia features 11 runners, including Joy and Zucchini Flower from the powerful Graham Motion stable.