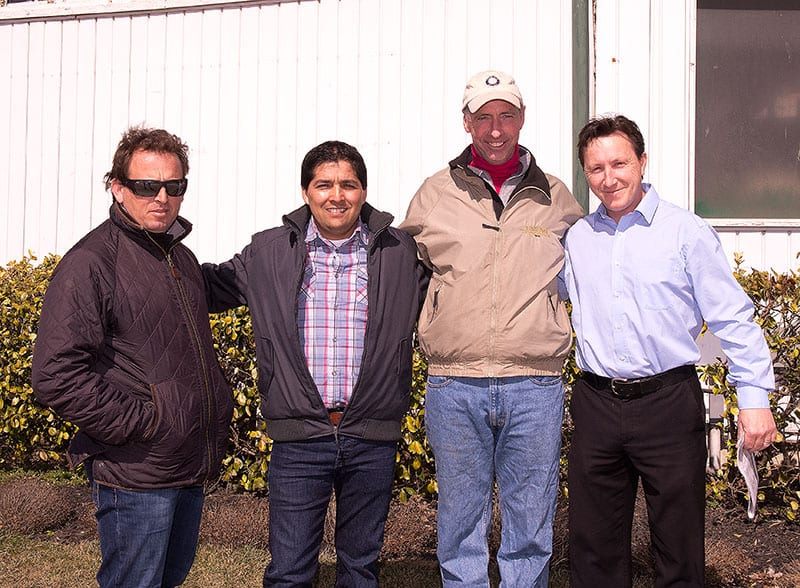 The day began with Hugh McMahon, Juan Vazquez, Claudio Gonzalez and Kieron Magee tied atop the standings with 19 victories and it stayed that way.

The battle came down to the 375th and final race of the meet. McMahon and Gonzalez had starters in the finale but neither Baby Titan nor Even Shower hit the board. The two trainers combined to go 0-for-7 on the 10-race card.

Vazquez went winless with four starters Saturday afternoon, which included a narrow loss by Cotton Won in the 8th. The 4-year-old colt looked to be a winner before 15-1 shot Dancin n’ Dealin caught him in the final jumps.

Magee did not have any runners on closing day. He finished the meet with an impressive 30% winning percentage.

“Who saw that coming?” Magee said. “After we won our 19th yesterday the others had 20 shots to win a race. I kept waiting for somebody to win a race and as every race went by today I kept thinking we had a chance though my wife and I left after the 8th because I thought Hugh (with Baby Titan) would win the last race. As I walked out Hugh sent me a text that said ‘good luck’. That was a classy move. Juan just called to congratulate me. I couldn’t be happier. I have 22 horses. Hugh has 80 in training. Juan has more than 70. Four years ago I had four or five horses. To win a share of the title, believe me, I am thrilled.”

McCarthy topped the jockey standings with 54 first place finishes, 16 more than Victor Carrasco. The 19-year-old had 18 multiple win days during the meet. The son of former rider Mike McCarthy will become a journeyman next month. Last year he ranked fourth in victories and was third in earnings among apprentice riders. He finished fifth in the voting for outstanding apprentice rider despite missing five months with a broken left tibia. Carrasco became the 10th Maryland-based jockey to win the Eclipse Award for top apprentice rider.

“I really would have liked a chance at winning the Eclipse Award last year but I got hurt,” McCarthy said. “So my goal is to get near Carrasco’s stats as an apprentice before I lose the bug on April 19.”

Live racing shifts to historic Pimlico Race Course on Thursday, April 3 for the 35-day spring meeting, headlined by the 139th running of the $1.5 million Preakness® Stakes, the middle jewel of racing’s Triple Crown, on May 17. First post for opening day is 1:10 p.m.