Equine Camille Claudel looks to make her own way 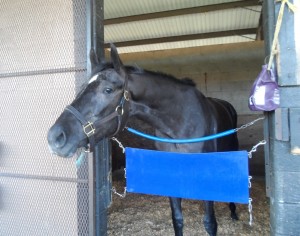 “…those close to Camille…witnessed her fiery temperament, her tendency to dominate, her caustic wit and, later, the terrifying violence of her strange, eccentric and provocative character, as well as her legendary, savage gift for mockery…” —Musée Rodin

Gifted, tempestuous, and headstrong, sculptor Camille Claudel shared a life and her art with Auguste Rodin for 10 years, despite his longstanding relationship with Rose Beuret, the mother of his son and the woman he lived with until his death.

“From 1882, when they first met, until 1892, when they parted, Camille Claudel and Auguste Rodin would enjoy neither peace nor stability,” continues the text at the Musée Rodin.

Camille Claudel. What better to name a filly by Broken Vow out of Charming Ruckus?

Trainer Francis Abbott III got his first stakes win last summer with another cleverly named filly when Nellie Cashman won the Virginia Oaks at Colonial Downs. By Mineshaft, she is named for a woman described as a “quintessential gold mining stampeder” by the Alaska Mining Hall of Fame.

He hopes that Camille Claudel will be the barn’s second stakes winner, and fortunately for Abbott, the equine Camille shares only a few of her namesake’s characteristics.

“She’s a little temperamental,” said Abbott, who goes by Tres (pronounced “trez”), standing outside the three-year-old filly’s door at his Palm Beach Downs barns, “which is kind of funny because she’s really kind of relaxed.”

While that characterization might be belied by a deflated jolly ball hanging outside her stall, Abbott insists that she’s more high-spirited than obstreperous.

“She’ll get herself worked up in a playful way—like in the van, she’ll kick her hind shoes off. She’s really impatient and kind of bossy. She thinks she’s a little bit of a colt.”

After much deliberation, Abbott made the call to enter Camille Claudel in the Gulfstream Oaks on Saturday. The fifth betting choice on the morning line (8-1) in a field of eight, Camille Claudel was initially pointed to an allowance race at Laurel next month, as a prep for the Black-Eyed Susan at Pimlico in May.

Owned by Sycamore Racing, a partnership put together by Abbott’s father, Camille Claudel sold as a yearling for $65,000 at the Fasig-Tipton July sale in Kentucky. She broke her maiden in her second start by a mere 19 lengths at Laurel last November, then faltered in stakes company at Aqueduct in January, finishing sixth in the Busanda.

“We shipped her up [from his Fair Hill base] on a Thursday and when I scoped her after the race, she was full of mucus,” said Abbott. “She had every excuse. She stayed in the receiving barn at Aqueduct and there were no doors, and the snow was up to here. She had on two blankets and she was as happy as she could be. She ate up and was happy to be there. I wasn’t disappointed in her.”

After nearly two months off, she rebounded in an allowance race at Gulfstream, finishing second.

“I wasn’t too surprised that she ran so well down here,” said her trainer. “When she races, it’s like she’s constantly kind of ‘on.’”

Her afternoon demeanor is apparently in stark contrast to her morning behavior, when she is described by Abbott as “lackadaisical” and the “worst workhorse ever.”

Earlier this week, after she’d already been out to train, Camille Claudel was not terribly interested in visitors. Her back to the door, she nibbled at hay in the corner, barely twitching an ear at the conversation in the shedrow.

“If you don’t have anything to eat, she’s not interested,” said Abbott. “She will literally throw her feed tub out into the shedrow when she’s finished.” 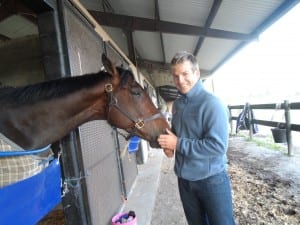 One might think that a filly with a mercurial streak might be picky about what she runs on, but she relished the slop at Laurel when she won so convincingly, and an unsettled weekend forecast may move her up in a race that came up a little tougher than anticipated.  That the race has come up tough might, said Abbott in a voice inflected by the seven years he spent living and working in England and Ireland, “throw a little bit of a spanner” into the plans he’s made.

“If she finishes 1-2-3, awesome, you get black type, you get the money,” he said. “You finish fourth, you don’t get any black type, and it would be difficult to run back in two weeks in an a-other-than. It would really screw up the plans for the Black-Eyed Susan.”

In the artist Camille Claudel, talent and virtuosity combined with emotional instability; the fury and tumult of her life fueled her art but took its toll, eventually resulting in her forced confinement. In the racehorse, ability and equanimity more comfortably co-exist, and perhaps on Sunday, the artist’s namesake will get a little sculpture of her own, in the form of the trophy given to the winner of the Gulfstream Oaks.