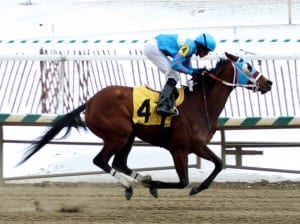 Seven 3-year-old fillies looking for their first career stakes win will battle in Saturday’s $100,000 Caesar’s Wish Stakes at Laurel Park. The race was originally scheduled for last weekend but was postponed when only three runners were entered.

Steady N Love is the even money favorite in the one mile test. The Not For Love filly has finished in the money in eight of nine starts, including second place finishes in the Wide Country Stakes in January and the Maryland Million Lassie last October. In her last start, the Gary Capuano trainee scored by 20-3/4 lengths as the overwhelming favorite against optional claiming foes on February 17. Victor Carrasco has been aboard for her past two starts.

“She is getting better and is a nice improving filly who tries every time which is all you can ask for,” Capuano said. “Obviously her last race she was in the right kind of field and ran to it. The race before that she ran against Taris, who is a very nice filly. We got into some trouble around the far turn but made up some distance and ran a really good second. We were happy with that effort.”

Capuano runners have finished in the money 18 times in 21 starts at Laurel Park this year.

Brown Rice (5-1) won on the last day of 2013 over optional claimers, beating Steady N Love by a length and three-quarters.  The Big Brown filly hasn’t started since. Sheldon Russell picks up the mount for trainer Ferris Allen.

Another winner from her most recent start is Tupancy Links (3-1), who beat optional claimers on February 1 under Horacio Karamanos. Previously the daughter of Kodiak Kowboy finished second in the Gin Talking Stakes. Vernon Allison is her trainer.