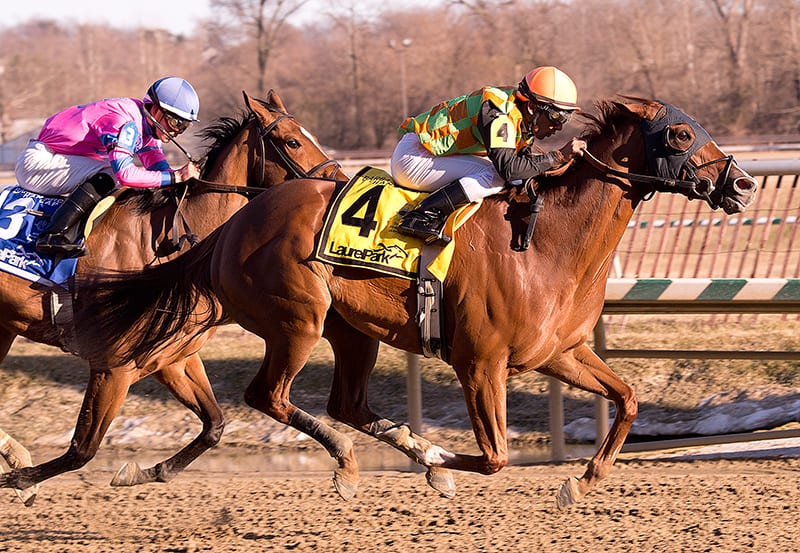 The Fritchie was rescheduled for today after the card for Saturday March 15 was lost to inclement weather.

My Wandy’s Girl pressed, caught and repulsed post time favorite La Verdad to win by a length in 1:23.79 for the seven furlong distance. Centrique finished a close-up third.

The win also marks the third victory in the Fritchie for trainer Michael Hushion, who won with Golden Dawn (2008) and Harissa (2011).

Maragh said, “It was a very competitive race. I had one to the inside and one to the outside and my horse showed a lot of guts by holding them off. I was hoping to be up close without using her too much. I didn’t want the three (La Verdad) to be out there all alone. My horse seems to have much better fight when she’s in a real race. I kept her off the rail because it seems to be a disadvantage today. She was getting tired but I switched leads and she found more in her.”

Jose Ortiz (jockey La Verdad-2nd) “She broke good and took the lead like normal but the four was breathing one lane behind me all the way. My filly missed a couple days training and was stretching out a little at seven furlongs.”

Linda Rice (trainer La Verdad-2nd) said, “ It’s a big step up in competition but I have a terrific filly and it was a disappointment. She hung in and considering this was her first time out of town, her first stakes race and the fact she didn’t get to train much the last three weeks with the weather in New York, she did very well.”