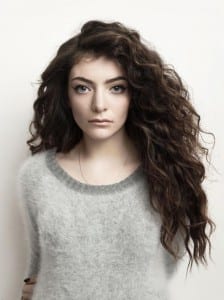 Lorde will headline the Preakness InfieldFest.

The annual running of the Preakness is an American institution. First contested in 1873, it is one of thoroughbred horse racing’s most valued Grade 1 stakes races. Now one of the largest single-day sporting events in the United States, “The People’s Race…The People’s Party” has hosted up to 121,309 for the pivotal middle jewel of thoroughbred racing’s Triple Crown at famed Pimlico.

Lorde earned Grammy Awards last month for Song of the Year and Best Pop Solo Performance for her #1 single “Royals” and received nominations for Record of the Year and Best Pop Vocal Album for her debut album, Pure Heroine, which was released in September 2013 to commercial success and critical acclaim. The New Zealand native was one of fourteen artists selected to perform at the Grammy Awards and appeared on the cover of the January issue of Rolling Stone. Additional information can be found at http://lorde.co.nz/, https://twitter.com/lordemusic and https://www.facebook.com/lordemusic.

“Preakness InfieldFest enters its sixth year, now positioned as the region’s biggest, best and most unique party with first-class music and top-notch racing throughout the day,” said Maryland Jockey Club president Tom Chuckas. “Lorde’s popularity is rising at a staggering rate from radio spins to social media to online plays and views. Her appeal cuts across multiple fan demographics and reflects the cutting edge talent fans have come to expect at InfieldFest. She is an extraordinarily talented artist and we look forward to welcoming her to Preakness InfieldFest.”

In addition to the main stage, Preakness InfieldFest will feature live music from top acts on a second stage, presented by Jägermeister, and a variety of other activities. The Jägermeister stage acts and the other main stage performers will be announced at a later date.

Renowned independent promotion and production company, I.M.P., of 9:30 Club and Merriweather Post Pavilion fame, has booked and produced the InfieldFest main stage since its inception in 2009. Additional information can be found on http://www.930.com/.

Seating information and ticket reservations are available at www.preakness.com. Tickets can be bought by calling the Preakness sales office (877-206-8042) or by logging onto http://www.ticketfly.com/event/380219-preakness-infieldfest-baltimore/.