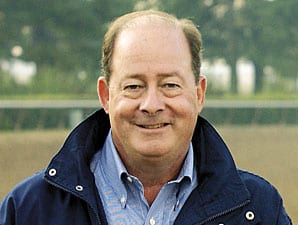 In January of 2013, D.G Van Clief, Jr., a prominent executive with a lengthy career in the Thoroughbred industry, took his first seat as regulator on the Virginia Racing Commission.  He is now vice chairman of the Commission.  The former Executive Director and President of the Breeders’ Cup, founding chairman of the National Thoroughbred Racing Association, and Chairman of Fasig-Tipton may have arrived back in Virginia at the perfect moment to assume a leadership role.

Within a year of joining the Racing Commission, Van Clief has reassembled the “blue ribbon” committee, which he chairs, to deliberately address current issues that test Virginia horse racing industry.  Over a decade ago a previous assemblage chaired by Anne Poulson was successful in bringing some growth to the industry prior to the economic downturn.  In bringing key partners to the table, Van Clief’s group seeks to move Virginia racing forward in a changing industry climate.

I spoke with Van Clief earlier this month about where Virginia racing is, what’s good about it and where it may be headed. The interview below is part 2 of a two-part series.

Q. Looking forward, where would you like to see horse racing in Virginia ten years from now?

VAN CLIEF: I think there are several things you can say about what you would like to see.  I would like to see a business we could look at and comfortably say, “It’s sustainable.”  I’m not sure we could say that today, given the indicators at either the local or national level.  And if business indicators are carried forward on a straight line basis, you can argue that there is a risk of extinction.  So what we want to see first and foremost 10 years from now is to be able to look at Virginia’s racing and breeding industries and say these are sustainable.  Better yet, I think we are going to want to look at additional growth. For that to happen we are going to have to make some changes.

First of all, and the goal of our committee, is to get the parties to work together.  Our “blue ribbon” panel at the moment includes the VHPBA [Virginia Horsemen’s Benevolent and Protective Association], the Virginia Thoroughbred Association, Colonial Downs, the Standardbred industry, the steeplechase industry in the persona of The Gold Cup, and the Commission.  I think we see ourselves as the convening authority so we have assumed the leadership role in that regard, but what we really want to see is these parties engage with each other in the development of a creative and innovative plan that will market the sport in a more effective and efficient way than has been the case in the past.  If that can be done — remember, we’re in the business of bringing customers to our sport and selling $2 tickets — if we can achieve that, then the breeding industry will follow and we will see some growth.

My vision ten years from now is to be in a mode where could say without question that the industry is sustainable and I’d like to see within ten years at least modest growth.  We’re bucking some local and national trends to get there.

Q. The “blue ribbon” committee formed about a decade ago had some success in the past.  This new version of it is just a few months old.  How far down the road is the committee towards reaching their objectives, and how would you rate where the committee stands?

VAN CLIEF: The goal initially was for the Commission to convene a committee of stakeholders, and they’re represented by Dr. Dunavent of the Standardbred industry; Debbie Easter, Executive Director of the Virginia Thoroughbred Association; Dr. Al Griffin of the Gold Cup; Frank Petramalo of the VHBPA; Ian Stewart of Colonial Downs; and then the Commission, which is represented by Sarge Reynolds, Bernie Hettel and myself.

We’ve got the right players at the table.  I think you’ll see this panel expanded.  We’re talking about what we might need in the way of additional assets: other skill sets, those who’ve had experience, perhaps those who served on the commission previously or others.  We want to reach out a bit.  We don’t think we have all the answers with this small group.

We’ve spent some time and we’ve met twice now, once in October and once in November discussing our vision and our mission.  We spent some time fleshing out a situational analysis, some of the elements we’ve discussed already, such as the business trends both good and bad, to make sure we were all on the same page in understanding where we think we are and thus that gives us a starting point.

We have already begun to discuss possible action plans as well as topics for further study and I’d say we’re a long way from reaching conclusions in developing a good, solid comprehensive plan.  Once we issue this plan we understand it needs to hold water with multiple audiences, first of all with our own industry, with future investors in the industry.  It needs to be understandable and acceptable with any future marketing partners.  It needs to hold water with our legislators and also with the media.  So we’ve got those audiences in mind when we are talking about the plan.

We’re maybe 5%, maybe 10% into the job at this point.  I think we’ve got a long way to go.  Personally I had hoped we’d be able to bring a plan at least in preliminary form by early summer.  The deeper we got into it, the more it seems we have to do.  We’ve got to gather a lot more information, and a lot of opinion.  We were in the process of putting together some industry meetings.  We want to poll opinion around the Commonwealth and we got sidetracked in November.  We were not able to have these meetings so we’re actually fallen a little behind our timeline at this point.

A two-minute clip of Van Clief speaking of the goals and objectives of the “blue ribbon” committee:

Q. What are some of the things, goals and objectives, that are being talked about? 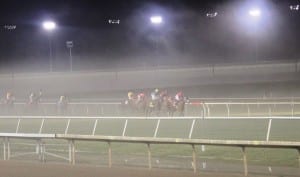 D.G. Van Clief is hoping that the Commission can help the racing industry emerge from the fog. Photo by Nick Hahn.

VAN CLIEF: Looking at the situational analysis we think, generally speaking, the racing product needs to be better quality than it is.  We’ve got a great turf course and we’ve had some good racing days, but we don’t have enough good racing days.  If we are going to break out and have a product that sells nationally, then we need more quality.  We think we need to do some work on trying to have a rational schedule with our mid-Atlantic partners.

We understand that our OTB facilities are becoming archaic, so we need a new off-site model, and those are just a few of things we’re looking at.

Some of the goals we’ve identified are that, in addition to more quality racing days, we would ultimately like to have more racing days, but the two work against each other. Given the amount of purse money that’s available, in order to have more quality days, we would not be able to afford as many days.  So we’re seeking a compromise in that regard where we can sustain a racing business here with enough days to attract a good population of horses, but at the same time, fund more quality days than we have, which are much, much easier to market than your run-of-the-mill claimers.

I’ve already mentioned we want to build our ADW business.  We want to maintain our fields sizes, if not grow them. We’d like to see an enhanced breeder’s incentive fund.

On a political note — this has been tried before or at least discussed before — we would like to see the Commission able to recapture its own budget surplus which currently goes into the general fund, so I think we would like to develop a better, more efficient political profile at the state level than we currently have.

The interview concluded with Van Clief offering one more thought: