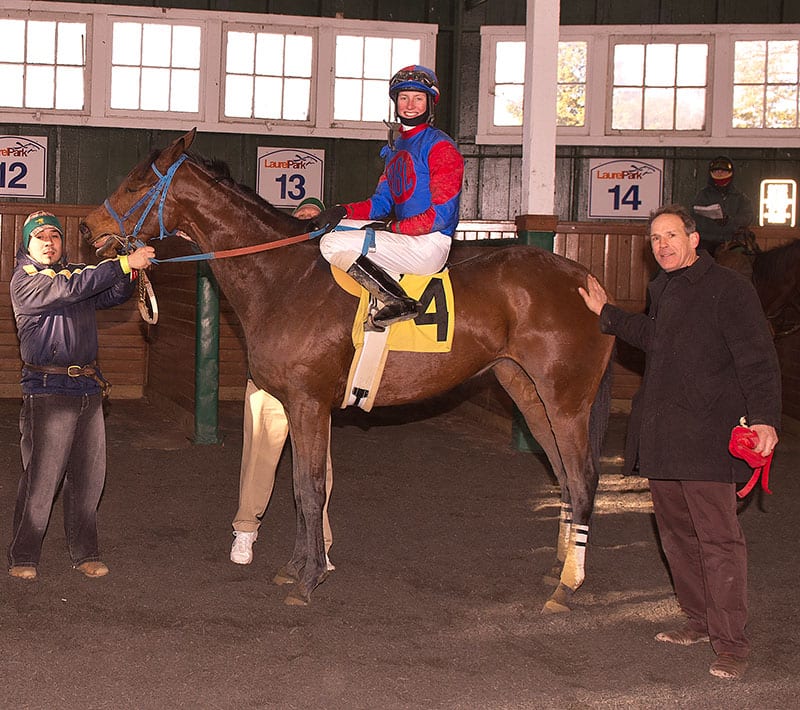 Apprentice Trevor McCarthy matched his career-high by riding four winners on Wednesday afternoon at Laurel Park. In the process, he moved into first place in the jockey standings for the winter meeting.

“It is a good feeling,” said McCarthy, who has 15 winners at Laurel this year, one more than Victor Carrasco. “I rode a lot of good horses today. I have the bug until April 20. The goal right now is to ride the best races I can and prove to trainers that I can continue to win after becoming a journeyman.”

Gypsy Heart gave owner-trainer Rick Buckley his first victory since 2000. Buckley, a salesman at Northwest BMW a few miles from Pimlico Race Course, had not saddled a runner in more than 13 years, before acquiring the daughter of Domestic Dispute last year from his cousin, trainer Snake Frock.

“I grew up at the track and made this my career in the 90’s,” Buckley said. “Unfortunately I broke my neck in a swimming accident at the end of 2000 and it made me wake up. I had three young children that needed me.”

“She took to me right away. We had an instant bond,” added Buckley. “This is a really nice filly. I have had some decent allowances horses but she is far and above the best horse I have ever had and she is still learning. Her future is going to be going long on turf.”

Buckley indicated if Gypsy Heart continues to progress he would consider running in the $100,000 Conniver Stakes for Maryland-breds here on March 22.