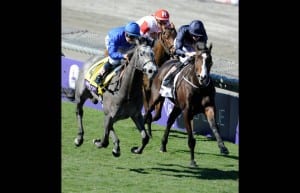 West Virginia-bred Giovanni Boldini, inside with white blaze, slugs it out with Outstrip in the Breeders’ Cup Juvenile Turf. Photo by Gary Mook, Breeders’ Cup Ltd.

Eighteen horses bred in the mid-Atlantic region were among the 199 assigned weights on the 2013 Experimental Free Handicap, the Jockey Club announced today.

Of the region-bred horses, West Virginia-bred Giovanni Boldini received the highest weight, 122 pounds.  The son of War Front-Dancing Trieste, by Old Trieste was bred by Charles Woodson.  But the horse is based in Ireland and trained by Aidan O’Brien.  He won twice from four starts during the year, and he finished third in the Group 1 Vincent O’Brien National at the Curragh.  He concluded his freshman season at Santa Anita, where he finished a very good second in the Breeders’ Cup Juvenile Turf.

He was assigned four pounds fewer than the 126 given to Breeders’ Cup Juvenile winner New Year’s Day.

Among the fillies, Ria Antonia and She’s a Tiger, noses apart in the Breeders’ Cup Juvenile Fillies — a race in which the latter actually crossed the line first but was disqualified to second, putting Ria Antonia up — were the co-highweights, both receiving 123.

According to the Jockey Club, “The Jockey Club Experimental Free Handicap, published annually since 1935, is a weight-based assessment of the previous year’s leading 2-year-olds, with the weights compiled for a hypothetical race at 1 1/16 miles on dirt… Eligible for weighting were all 2-year-olds of 2013 that finished among the top four in graded or listed stakes races run in the continental United States. Listed stakes in 2013 were those with a value of $75,000 or more available to all starters, and no restrictions other than age or sex.”

Eleven region-bred males were among the total group of 102, while the 92 weighted fillies included seven bred in the mid-Atlantic.

Pennsylvania led the region’s states, with six horses bred in the Keystone State on the Handicap.  Miss Behaviour led the PA-bred fillies; the Grade 2 Matron winner, who is trained in Maryland by Phil Schoenthal, received 114 pounds.  She is a homebred for owners Cal MacWilliam and Neil Teitelbaum.  The top Pennsylvania colt was 111-pound Storming Inti, who won three of four starts on the season, including two minor stakes.  By Stormy Atlantic out of the Pulpit mare Tarfaya, he was bred by Brushwood Stable.

Despite shrinking foal crops, Virginia continues to produce quality Thoroughbreds; five of them made the Handicap.  On the boys’ side, the top Virginia-bred was Bond Holder (119 pounds), fourth in the Breeders’ Cup Juvenile after a victory in the Grade 1 FrontRunner at Santa Anita.  The son of Mineshaft-Cielo Girl, by Conquistador Cielo was bred by Lazy Lane Farms.  Fascinating was the top-weighted Virginia-bred filly, with an impost of 117.  The Audley Farm product, by Smart Strike out of the Storm Cat mare Untouched Talent was winless in four tries but placed in a pair of Grade 1 events.

Four Maryland-breds were on the two lists.  Marylander and Maryland Juvenile Championship winner Joint Custody topped that group with a 108-pound rating.  A homebred for Konrad and Janet Wayson, he’s by Outflanker out of the Malibu Moon mare Paying Off and is trained at Laurel by Jerry Robb.  Michael Matz trainee Who’s in Town, by Speightstown-Who’s Cozy, by Cozzene, is the lone Maryland-bred filly on the list.  She received 112 pounds after a season which saw her win the Grade 2 Adirondack, only to be disqualified and placed fourth.  Richard Golden owns the Sycamore Hall product.

All three West Virginia-breds on the list were males.  In addition to Giovanni Boldini, a pair of horses toiling locally — undefeated Amherst Street (107 pounds) and Comeonletsplay (100 pounds), who finished second to Amherst Street four different times, including three stakes — also made the list.

In the tables below, highlighted text links to our previously published stories about the horses.