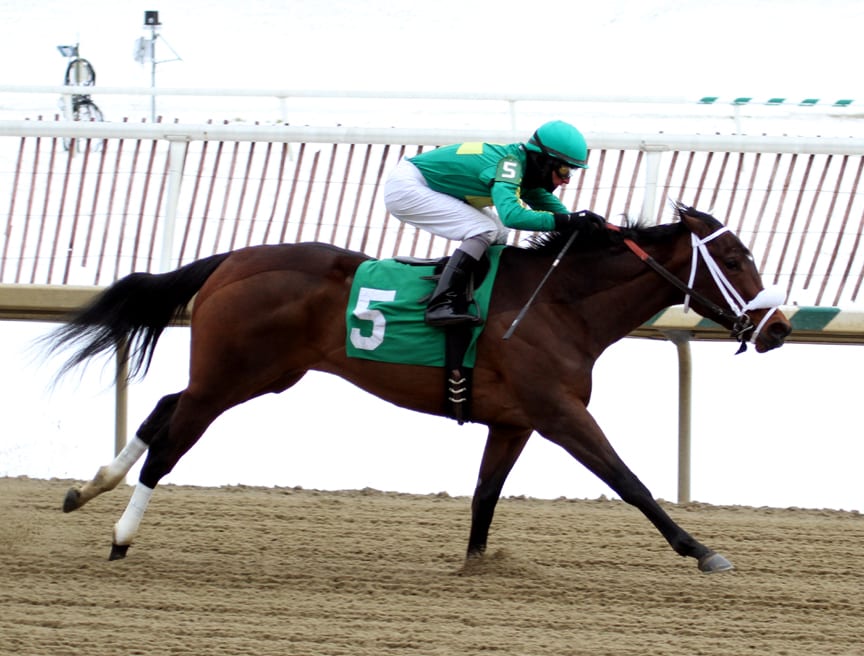 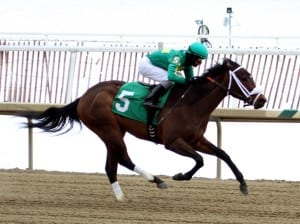 Taris cruises to victory in the Wide Country Stakes. Photo by Laurie Asseo.

Commonwealth New Era Racing’s Taris quickly dispensed of Jonesin for Jerry and sped away to an easy victory in the $100,000 Wide Country Stakes for three-year-old fillies, the first of four stakes on Saturday at Laurel Park.

Away from the gate at odds of 1-5 under Clinton Potts, Taris beat Steady N Love by 5-1/2 lengths in 1:24.71 for the seven-furlong distance for trainer Todd Beattie.

“It was a pretty simple race today,” Potts said. “I had some pressure early in the race and I was a little concerned because the track was deep but this horse handles everything right. Todd deserves great credit for getting this horse ready because she does everything just like an older horse. Her career is definitely going to go far.”

The daughter of Flatter was an impressive 11-3/4 length winner in her debut at Aqueduct on December 21.

“She just continues to impress me,” Beattie said. “I’m going to go south with her and try to avoid this cold weather, freshen her up a little bit at my sister Holly’s farm in Ocala. The logical spot to run her back would be the one turn mile here on March 8 (Caesar’s Wish Stakes) but we’ll have to see how the weather and all plays out. I love to run in this region. I’m stabled at Penn year round and I like the way I get treated when I come down here but I have the option in Florida to stay there and run in the Honeybee on the same day.”