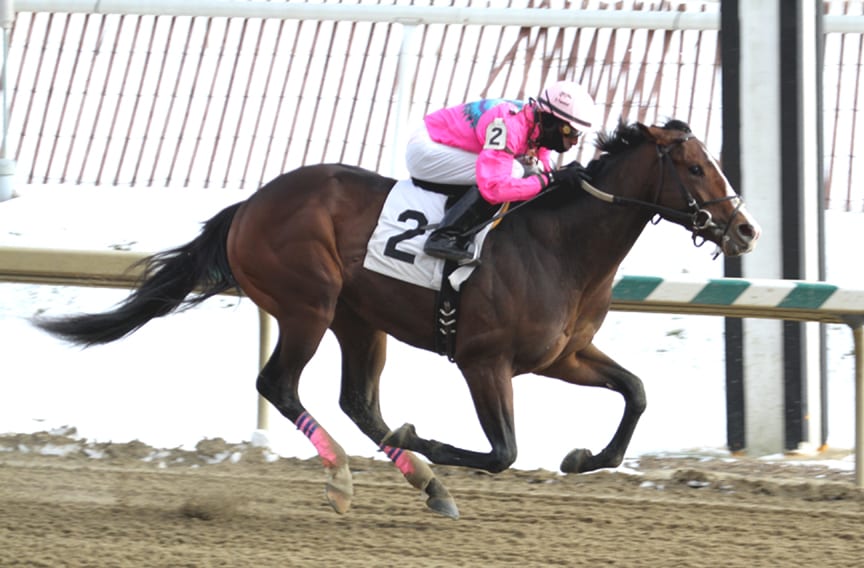 Kirwan Equine Group, LLC & Ed Hipps’ Extrasexyhippzster waited behind traffic, pounded through an opening when the field straightened for home and pulled away to an impressive score in the $100,000 Miracle Wood Stakes for three-year olds, one of four stakes on Saturday’s nine race program.

Performing for trainer Mike Trombetta and jockey Julian Pimentel, the son of Stroll completed the one mile distance in 1:36.75 and won by 3-3/4 lengths. He paid $8.40 as the third betting choice. Joint Custody loomed an early threat but succumbed to the winner to finish second. Mr. Rover rallied for third.

“Mike told me to sit behind those two horses and make my move when I thought the time was right,” Pimentel said. “I did just what he said and when things opened up I made my move and he just took off and that was it.”

Extrasexyhippzster finished fourth in the Marylander on December 7, then shipped to Aqueduct two weeks later and posted a convincing win in the Don Rickles Stakes.

“This was huge today,” Trombetta said. “I’m extremely pleased with this performance. You hope that everything turns out perfect the way a race develops but rarely does it. This was so impressive the way he rated behind all that speed. He was kind to Julian the whole way. When he found that spot at the top of the lane I was very impressed with the way he went forward. This time of the year you start trying them a little further to see if they’re going to be able to get the longer distances and for me today he passed the test. I don’t know where I’ll run him back but the obvious is to continue to add distance and two turns.”

Trombetta became a major player during the 2006 Triple Crown scene with Sweetnorthernsaint, the betting favorite in the Kentucky Derby (G1) and runner-up in the Preakness Stakes (G1).