Our “Favorite things” series looks back at our — and your — favorite stories, pictures, and videos of 2013.

During 2013, The Racing Biz teamed up with two regional equine nonprofits — Thoroughbred Placement Resources and Thoroughbred Retirement Foundation at James River — to promote caring for end-of-career racehorses.  As part of that, our series of “Retired Thoroughbred, Happy Endings” focused on horses who have had happy endings and the people that have enabled that to happen, such as this story about Mississippi Storm.

Mississippi Storm, being primarily a turf sprinter, was involved in many close finishes during his racing career.  The most exciting may have been his first grass race as a three year old against older horses.  Before the race we thought we had a turf horse.  Afterwards our doubt vanished when the photo sign came down and his number was placed first on the infield toteboard at Pimlico.

When I entered the racing game with my brother twenty years ago, I did so for the beauty, excitement and competition of the game.  My love affair with the sport began as a child when my father and grandfather attended the races with my brothers and me in tow.  Throughout the years my interest deepened as I frequented handicapping seminars, created my own speed figures and learned to read “The Sheets.”   When my brother Tim and I dropped our first claim slip, we had not considered what to do with horses at the conclusion of their racing career. 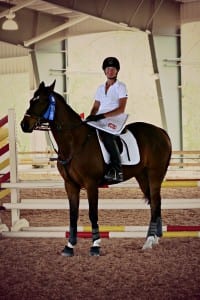 Dr. Kathleen Coyle aboard the horse they call Squirt. Photo by Katherine A. Turnbull.

After some early success, I found myself owning several horses with little apparent talent or interest for racing and others that had sustained career ending injuries.  Fortunately for me-and my horses- I was referred by my trainer to Kimberly Clark.  Kim is the first lady of Leighton Farm, located in Upper Marlboro, Maryland.   TPR’s mission, according to its website www.goodhorse.org  is to “to improve the lives of Thoroughbred racehorses and…. successfully transition and retrain racehorses for other disciplines and use these techniques and philosophies to help others learn these skills.”  TPR has retrained and found homes for over 800 horses , placing a special emphasis on racehorses that have campaigned in Maryland.  It relies solely on donations from Thoroughbred horsemen and the public.

TPR “strives to make a difference.” It’s a safe bet that they have achieved their goal. They have certainly made a positive difference to me.

My brother and I purchased Mississippi Storm as a two year old in 2005 out of a Fasig Tipton sale in Timonium.  The seller congratulated us, compared him favorably to Northern Dancer, and prophetically told us we would have a lot of fun with Mississippi Storm.

This incredibly brave horse raced for us from the time he was 2 until he was 7, winning 10 races, placing ten times along with eight thirds with over $180,000.00 in earnings.  He won on turf, dirt, going short and long, darting through holes, riding the rail and even once engaging a bullying horse in a fierce bumping battle at the wire winning the race and the fight.  At age seven while running better than ever he bowed a tendon.  We wrestled with bringing him back because he loved to race.  But good sense prevailed and Mississippi Storm went to Leighton farm to find a permanent home.

After giving him time for his leg to heal , TPR began the retraining process, closely watched by
TPR volunteers and staff.  One of those volunteers was Kathleen Coyle, who by day works as an Internist and Rheumatologist at a local hospital. It did not take long for the horse TPR nicknamed “Squirt” to bond with Dr. Coyle, a lifelong horsewoman.  Kim Clark assured me that I could do no better by Mississippi Storm, and shortly thereafter he was adopted by Dr. Coyle to be a show horse.

On April 27 and 28, 2013 TPR held its first annual Maryland Thoroughbred Charity horse show at the Prince Georges County Equestrian Center Showplace Arena.   The show was a series of events for retrained thoroughbred race horses.  I was fortunate enough to be there to witness Dr. Coyle return Mississippi Storm to the winner circle for the first time in three years.   The duo’s coach David Loman, and a proud team of instructors and volunteers were on hand to cheer as Mississippi Storm won the Smoke Glacken Novice Amateur Jumper event.  The win was the culmination of two years of daily care, seminars, instructors, vanning, veterinarians and lessons for both horse and rider.

A heartfelt thanks to Kim Clark, Dr. Coyle and the folks at TPR for helping to fulfill the implied promise all horse people make when we breed, buy and race these gallant animals.

(Photo above by Katherine A. Turnbull.  Her website is http://www.katherineaturnbullphotography.com/)