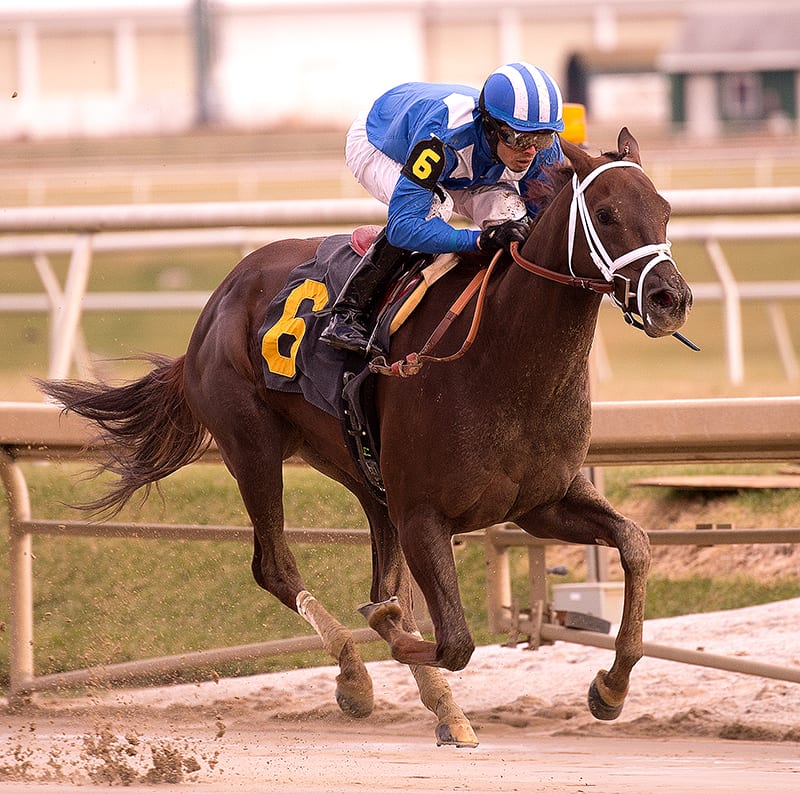 When the expected competition failed to show up, Sylvia Heft’s Eighttofasttocatch had it his own way once again as he galloped to victory in the $100,000 Broad Brush Stakes.

This was the tenth stakes win for the Tim Keefe trainee and his third stakes victory in a row at Laurel Park after taking the Maryland Million Classic and the Jennings Handicap this fall.

Under Forest Boyce, Eighttofasttocatch broke alertly from his outside post, then rated off of frontrunner Warrioroftheroses until neither he nor Boyce could wait no more. They pressed to the fore at the at the quarter pole and pulled away to win by two lengths. A.P. Cino took second and Gourmet Dinner finished third.

“There were a couple of horses in there today that had a lot of speed, so we knew that they would try him early today,” said Boyce. “His best races, yes they have been when he is in front, but at some point you know they’re coming after him. I just keep him happy and try not to let him get too aggressive. He was very settled today and he ran extremely fast the last 3/8ths. I don’t think he’s a one dimensional horse. Sometimes the best game plan is to not have a game plan at all.”

“We worked on simulating the race with other horses in the morning in case he had to race outside,” said Keefe.  “Peter Brown, his exercise rider, didn’t really have to ask him to go. He is such a smart horse, he knew just what to do. The fractions were a little slower than we expected. He is really right now. The race set up as we expected and he relaxed just off the pace. When Forest asked him to go, he was ready.”
[boxify cols_use =”5″ cols =”5″ position =”left” order =”none” box_spacing =”5″ padding =”5″ border_width =”2″ border_color =”blue” border_style =”solid” height =”60″]

Konrad M. Wayson’s Joint Custody broke alertly, quickly assumed the lead and then turned back all comers as he raced to victory in the Marylander Stakes for 2-year olds.

Wesley Ho was aboard for trainer John Robb as the son of Outflanker completed the seven furlong distance over the muddy going in 1:25.38 and won by 1-3/4 lengths. Post time favorite Jessethemarine raced behind a wall of horses before rallying into second, while Classic Giacnroll took third.

“His last race was a great schooling experience for this horse,” said Ho. “Today he had the perfect post position. The game plan was to go to the lead and go as easy as you can for as far as you can. It worked out just right. He rated perfectly for me. When I turned for home I asked him to go on and he just opened up very easily, very willingly. He gets to the lead and he’s starts waiting for competition. He wants another horse. I had to tap him a few times in the stretch to keep his mind on his business. He’s still a little green, but this horse has got a lot of talent and I think he’s going to move forward off of this effort.”

“We are aiming for the Juvenile (Maryland Juvenile Championship – December 28th),” said Robb. “We had confidence today. We schooled him the last time. We took him back and he learned how to run in the dirt. His mother loved the mud and he had a good mud number. I told Wesley that he has as much speed as anything in here, to stay outside of the rest of them and let them run on the deeper part of the track. In the stretch he ended up going to the rail anyway. He looked good today.“

This was Joint Custody’s first stakes win. His previous best was a runner-up finish in the Maryland Million Nursery.

Shadwell Stable’s Mamdooha and Eddie Castro were content to stalk the leaders until called upon for run, then picked off her rivals around the turn and drew away to win the $100,000 Gin Talking Stakes, the first of three stakes on the nine race program at Laurel Park.

Six 2-year-old fillies met the starter in the seven furlong test over the muddy going and Mamdooha was the 3-5 favorite. The Kiaran McLaughlin trainee completed the distance in 1:26.93 and paid $3.40. Tupancy Links finished second, 5-1/4 lengths behind the winner, and Venice Queen came home a distant third.

“I ride a lot of horses for Kiaran and he asked me if I wanted to go to Laurel to ride this one,” said Castro. “I told him I did and my horse ran very well. Kiaran does not give me instructions. He tells me to decide what to do after the horse breaks and from leaves it up to me to ride the race.”

This was the first stakes win for the daughter of Daaher, who left the maiden ranks at Aqueduct in her previous start.

(Featured photo, of Mamdooha, courtesy of the Maryland Jockey Club.)