Victor Carrasco keeps the future, and present, in focus 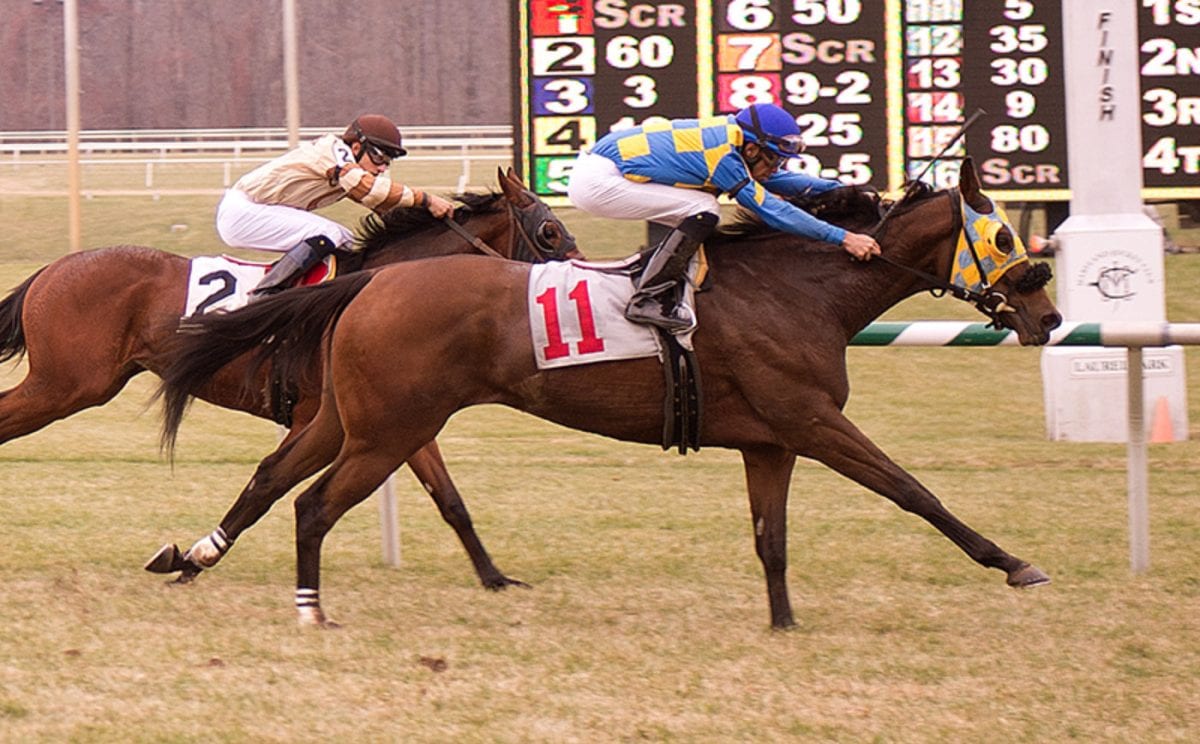 Victor Carrasco’s ascent to the top of horse racing’s apprentice rider ranks has been as rapid as it was unlikely.  It’s hard to imagine that less than a year ago, Carrasco booked a trip from Puerto Rico to Florida, equipped with nothing more than the dream of being a successful jockey.  He didn’t know anyone in Florida, and he hardly spoke any English. 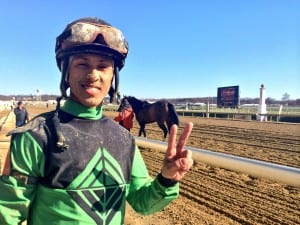 With nine multi-win days in his last 10, Victor Carrasco has had plenty of practice making this sign. Photo by Dan Tordjman.

Of necessity, Carrasco proved to be a quick learner.  It also helps that he possesses a certain magnetism and the kind of charm that’s evident in the demeanor of someone who has clearly committed himself to success.  It wasn’t long before he caught the eye of trainer Juan Vazquez at Tampa Bay Downs. Vazquez referred him to agent Tom Stift.

“When we’d first watched him in Tampa, he’d only ridden a few races,” said Stift, “but you could tell he had the mechanics.”

Stift offered to take Carrasco’s book and asked him to move to the Mid-Atlantic.  But short on experience and still somewhat unsure of himself, Carrasco called home to Puerto Rico.  There, he spoke to his uncle, a trainer and his mentor.  Carrasco’s uncle agreed to speak to Vazquez and weighed the opportunity for his nephew.

“Then my uncle told me it was OK to come to here (to the Mid-Atlantic) because (Vazquez) has a lot of good horses, he wins a lot of races and he had a good agent for me,” said Carrasco.  “And I needed that.”

Carrasco, 21, just needed that first break, and he’s made the most of the opportunity ever since.  He currently leads the nation in wins and earnings among apprentice riders.

What’s more, for Carrasco, the success was almost immediate.  At Pimlico, he finished tied for second in overall wins, just two behind Sheldon Russell, who had about 100 more mounts than Carrasco at the meet.
[boxify cols_use =”5″ cols =”5″ position =”left” order =”none” box_spacing =”5″ padding =”5″ border_width =”2″ border_color =”blue” border_style =”solid” height =”60″]

“I surprised myself,” Carrasco said. “But you know, when you trust in yourself you won’t have problems. That’s because the horse’s can feel when you trust. They know when you have confidence. So, that’s what I did. I just kept patient and I try to keep learning every day.”

As the wins began to pile up, Carrasco began to expand on his network of trainers who wanted him to ride for them. Carrasco’s confidence grew and he began to blossom. To his agent, it was remarkable to see Carrasco’s progression. It wasn’t only his riding that was impressive, it was how determined Carrasco was to improve his ability to communicate.

“You couldn’t have done an interview with him 10 months ago — you would’ve needed a translator,” Stift said.  “He really didn’t speak much English but you could tell how quickly he learned it.  I told him that’s one of the most important things because you have to communicate and talk to trainers to keep your business.”

“Listen,” Carrasco said, “I’m trying and the trainers can tell that I’m trying.  When they see that, they teach you and that’s a good thing.”

While the weather might’ve gotten cooler as summer turned to fall, Carrasco has managed to stay extremely hot.  Following a month in which he managed to win 25 races from 112 mounts at Laurel Park, Carrasco entered December with about a 10-win cushion atop the meet’s overall rider standings.  The stretch has also seen Carrasco soar to the top of the national apprentice rider standings, which he now leads by nearly a dozen wins over Florida-based bug Edgard Zayas.  And thus, the buzz about Carrasco winning an Eclipse Award has turned into a practical roar.

“That would be awesome,” said Carrasco. “I’m at the top right now and I think the Eclipse would put me even higher. But I’m the same person. I’ll just keep working like I’ve been working. That’s the most important thing.”

The prospect of winning an Eclipse is exciting not only for Carrasco but also for his agent.

“I hadn’t even thought about it until the past week or so,” Stift said.  “Now, I’m getting phone calls and now you start to get a little nervous.  I’ll be glad when the next few weeks are over with.”

Stift recalls one particular call six months ago from Scott Lake which, in retrospect, may have been prophetic.  After Carrasco had ridden his first race for Lake, the trainer called Stift and told him that Carrasco would win an Eclipse.  Around that time, Stift had suggested to Carrasco that he ride double-cards, bouncing between tracks across the Mid-Atlantic on a daily basis for months. 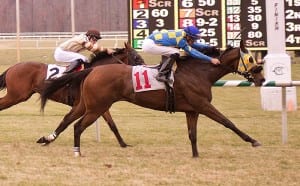 “I said, ‘Let’s do it,” Carrasco remembered. “I told him, if you want to put me in Penn National, Charles Town, Parx, Monmouth or whatever, I’ll ride.  And now, I feel great, not just for myself but for my family and for a lot of people who put trust in me and who have wished me good things.”

The stretch could’ve take a physical and mental toll on Carrasco but complaining isn’t in this rider’s makeup.  His entire family is in Puerto Rico and he still leans on them for support.  Carrasco is very active on social media, which he uses to stay connected with them, especially his mother.

“I put all those things on there for her and for my sister, my brother and all of my family,” said Carrasco.  “I just put things on Twitter and Instagram because that makes my family happy and that’s the most important thing for me.”

While Carrasco doesn’t have any relatives with him on a daily basis, he does have an extremely strong relationship with fellow bug rider Jevian Toledo, whom he calls his “brother.”  They’re roommates and they’ve been riding alongside each other since they both attended Escuela Vocacional Hipica.  The jockey school in Puerto Rico also trained current apprentices, Manuel Franco and Jorge Vargas, as well as racing legend (and Carrasco’s role model), John Velasquez.

It’s true, Carrasco didn’t land on the American racing scene with much more than a dream.  Heck, he hardly spoke English and probably couldn’t have pointed out on a map all of the tracks he’s found himself at in the past year.  But Carrasco did have focus, which is perceptible when you’re in his presence. It’s a professionalism beyond his years and it shows in his refusal to get overly excited about the prospect of carrying on the region’s tradition of cultivating Eclipse Award winning apprentices.

He is indeed on top right now.  And, if he continues to ride with the same focus, there’s no reason to think he won’t stay there for a long time to come.