Counting on mare power at the Fasig-Tipton mixed sale

Call it something more than just hope, but something less than irrational exuberance.

Just a few days before Monday’s Fasig-Tipton December mixed sale at Timonium, the enthusiasm engendered by some good quality mares, exciting young stallions, and a rising sales market is tempered somewhat by the small catalog and, to some extent, a lack of proven sire power in the book. 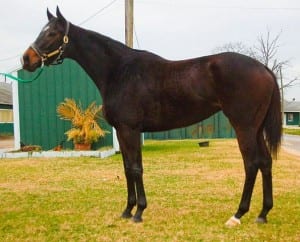 Overall, 210 hips were cataloged for the sale — about 30 fewer than last year’s event, and a number that caused some observers to wish for more horses.

Still, said consignor Bill Reightler, “I anticipate a good sale,” and Marshall Silverman, another consignor, agreed.  “If it follows the trend,” he said, “it should be pretty good.”

In a region relatively light on sire power these days — old standbys like Not for Love are in the dusk of their careers, and it’s unclear who the next Not for Love will be — that means mare power will be the order of the day.

“We’ve got a lot of stakes-winning mares, and some stakes-producing mares,” said Paget Bennett, sales director for Fasig-Tipton’s Midlantic office.  “There are some nice mares that should attract attention.”

Perhaps foremost among those is one from Reightler’s consignment, Mystic Love (hip 95).  The about-to-be four year-old daughter of Not for Love, out of the winning Dixie Union mare Memories of Mystic, is selling as a racing or broodmare prospect; in her brief career, she’s won two stakes, including the Dania Beach, over the boys at Gulfstream, and over $186,000.

Another that could draw some interest is Silverman’s hip 26, Wildheartsneverdie.  Though unsuccessful as a racer and fairly modestly bred, she is in foal to the late Rockport Harbor, the only horse at the sale to carry that distinction.  Rockport Harbor, who stood in his last season at Pin Oak Lane in Pennsylvania, had rather suddenly become a hot sire just before his untimely demise.

Hip 94 is yet a third of at least regional interest.  My Aunt Dianne, an unraced daughter of Norquestor being sold in foal to Outflanker, is already the dam of a pair of stake winners, including the ultra-precocious Toboggan Slide.  That runner, the winner of the Maryland Million Nursery and third in the G2 Nashua, had a somewhat checkered later career but was briefly the buzz of the racetrack as a juvenile.

Yet mares aren’t the only horses likely to pique buyers’ interest.  Some of the racing prospects may be equally alluring.

For example, three year-old High Wire Act, a daughter of Medallist and a half to two stake winners, including $600,000 earner Not Abroad, figures to draw some buyers.  She recently won at first asking against $25,000 maidens.

Hip 186 is a colt out by E Dubai out of the Tabasco Cat mare Lady Julia.  Silverman, who is consigning the horse, admits that E Dubai generally doesn’t get a pretty horse, but calls this one “a big, good-looking horse who is drop-dead correct.”

Hip 194, The Great Griffter, is another: the unraced daughter of Ghostzapper has been working towards her debut at Penn National.  And don’t sleep on Hip 206, a weanling with a strong female family on the bottom side — and the hottest sire around, Kitten’s Joy, on top.

Beyond the horses, Bennett, Reightler, and Silverman also point to changing conditions as possibly benefiting the sale.  Silverman described the Keeneland November sale as “just crazy,” resulting from an improved economic outlook that is beginning to bring some money back into the game.  “Some of the people that were on the shelf seem to be stepping back in,” he explained.

Reightler concurred.  “People are hungry to buy horses,” he said. 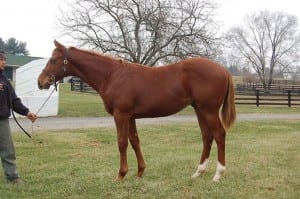 Also on the plus side is the recently announced program to bolster Maryland-breds, which will provide enhanced purses to owners of Maryland-breds that finish in the money.  Both Reightler and Silverman say that they have recently taken calls from out-of-state buyers considering picking up horses bred in the Free State.  Forty-one of the horses in the original book — more than any other state — are Maryland-bred.

Of course, to some extent the attraction of a mixed sale is just that: it’s mixed.  “There’s usually something for everybody,” Bennett observed.

And if the sale is well attended — which all three expect — those in attendance will have plenty of opportunities to spend their money on weanling, yearlings, racers, and broodmares.

“They’re going to bring what they’re worth is the bottom line,” said Silverman.