In our preview, we raised a handful of questions that last night’s Fabulous Strike card at Penn National figured to answer.  Here are the answers:

QUESTION: Can anyone beat Ribo Bobo in the Fabulous Strike? 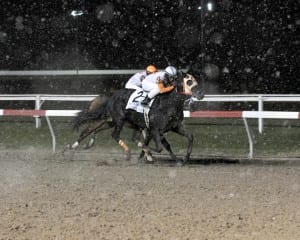 Ben’s Cat inches clear of Ribo Bobo to win the Fabulous Strike at Penn National. Photo by B & D Photography.

ANSWER: YES.  Ben’s Cat stalked the pace from second, never more than a couple of lengths behind, swung out at the head of the lane, and wore down the pace-setting Ribo Bobo to win by about half a length.  It was another three-plus back to late-on-the-scene Good Morning Diva.  “It worked out well for me,” said Ben’s regular rider, Julian Pimentel.  “The favorite [Ribo Bobo] broke on top and I was in a perfect spot. I moved a little earlier than I would have because speed had been holding up pretty well tonight. Turning for home I had so much horse that when I asked him to go, he went on very well.”

Ben’s Cat’s octogenarian trainer, King Leatherbury, added, ““It was a very exciting race. We were hoping some other horse would have some speed to soften up the favorite [Ribo Bobo], who was obviously the horse to beat. That didn’t really happen, but my horse always closes and finishes well so I wasn’t really worried because I thought we were close enough to the leader coming into the stretch. He is a truly remarkable horse.  “As long as everything goes OK, he will be back next year for the Mister Diz in the spring at Pimlico to try and win that race five years in a row.”

But maybe Penn National’s track announcer said it best, as Ben’s Cat passed the finish line: “This is a racehorse!”

QUESTION: Can Five Star Momma take them all the way in the Lady In Waiting?

ANSWER: YES.  The four year-old filly broke on top, led by four after a quarter-mile in 22 2/5 seconds, and then had just enough to hold off favored She’s Ordained in a long drive to the wire.  Pimentel, the rider of Ben’s Cat who also was aboard Five Star Momma, explained, ““[Trainer] Jena [Antonucci] told me to put her on the front and improve my position, so I did that. She came out of the gate pretty fast and when she saw [She’s Ordained] come up on the outside of her in the stretch, she kept on digging.”

QUESTION: Which, if any, of a handful of interesting story lines will prevail in the Swatara?  Will we see the good Norman Asbjornson tonight, the one who’s won two stakes this year and run well in a couple of others?  Or will we see the one who was nowhere in the Monmouth Cup and the Westchester?  Can the talented Stephanoatsee get back on track?  Can Managed Account make it four straight wins — and three straight stakes?  Can Taptowne, who figures to be the favorite, win after failing in his last two as the favorite?

ANSWER: Taptowne proved much the best in a five length win, with longshot A.P. Cino holding second.  Managed Account led for the first half-mile but had no answers late.  Neither Stephanoatsee nor Norman Asbjornson was ever much involved.  They finished sixth and seventh, respectively, beaten by 11 and 12 lengths.

Taptowne “was a little closer to the lead than we would have liked him, but it’s to be expected since he was a pretty fresh horse coming into the race and there wasn’t much pace in the race,” observed his trainer, Tim Glysshaw.  “He could have gone to the lead if he wanted to but he doesn’t run his best like that so I thought Brian [Hernandez] gave him a great ride. We were in the Breeders’ Cup Mile and got vet scratched because of a bruised hoof. He was supposed to get a month off after that and get ready for Oaklawn, but the owners and I decided to come and give him something positive to go get his rest on, and this does that.”

QUESTION: On a day with tough weather in the East, can Penn National top last year’s handle for this day — a little over $1.5 million? 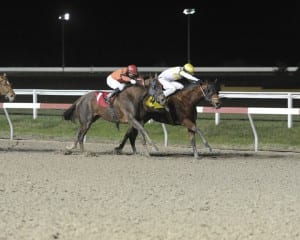 Five Star Momma just holds off She’s Ordained to win the Lady In Waiting. Photo by B & D Photography.

ANSWER: YES.  Although the card was halted after the seventh race, total wagering on the program was over $1.6 million, versus $1.549 million for a similar program — but nine races — a year ago.  “It was a tremendous night of racing at Penn National highlighted by a thrilling victory from one of the most accomplished horses in the country, Ben’s Cat, and his trainer King Leatherbury, who is one of the true legends of thoroughbred racing,” said Dan Silver, director of racing operations at Hollywood Casino at Penn National Race Course. “The night was possible due to incredible work by Jake Leitzel, our manager of racetrack maintenance, and his entire team in getting the track in such terrific shape. Additionally, Dave Bailey, our racing secretary, Craig Lytel, our stakes coordinator, Jenny Bowman, our assistant racing secretary, and the entire racing office did a great job of putting together an excellent card. Thanks also to the horsemen for their strong support of the evening.”

(Featured image by B & D Photography.)