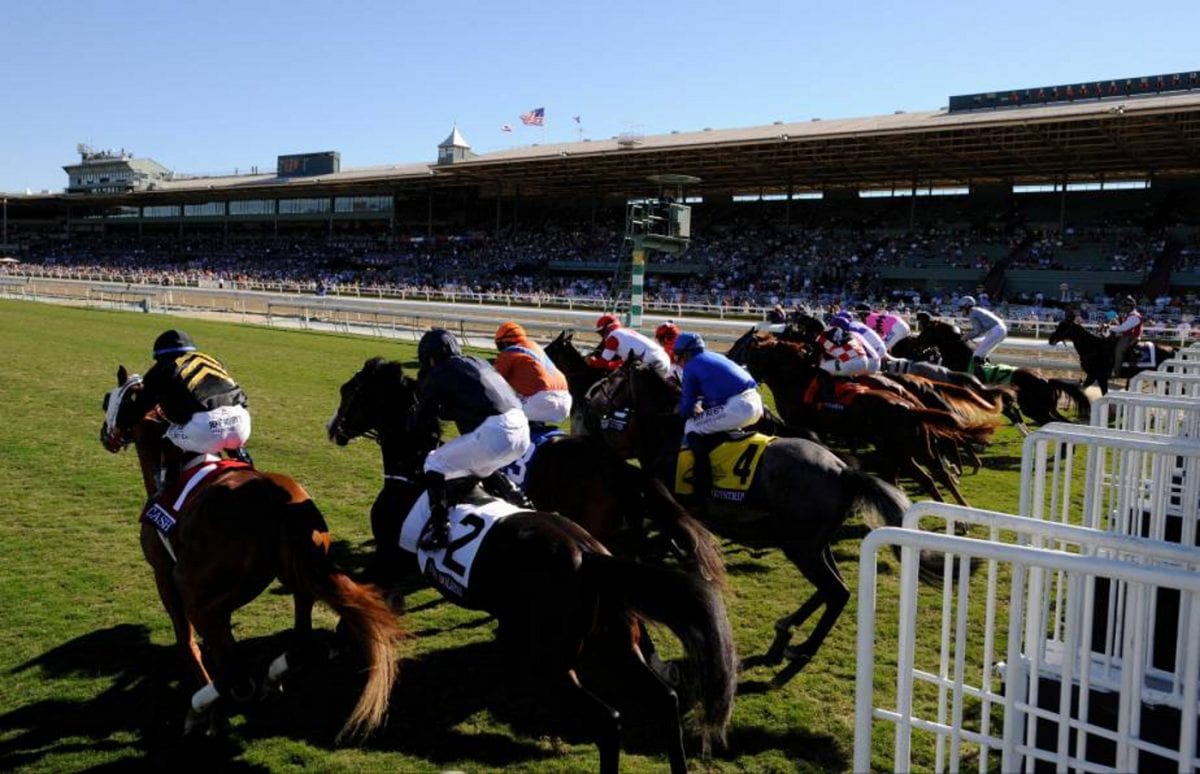 Take out the past performances for the Breeders’ Cup Juvenile Turf.  Thumb through them.  Note where the horses were bred. 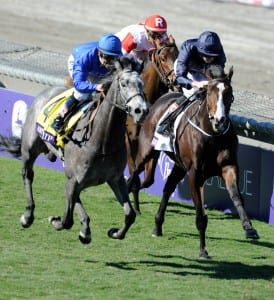 Giovanni Boldini, inside with white blaze, slugs it out with Outstrip in the Breeders’ Cup Juvenile Turf. Photo by Gary Mook, Breeders’ Cup Ltd.

Wait a minute.  What was that?

You’ll be forgiven if you did an immediate double-take when you noticed that one of European trainer Aidan O’Brien’s runners, Giovanni Boldini, was a War Front colt bred in West Virginia who’d been a $675,000 yearling purchase.

After all: a War Front colt bred in West Virginia?  Not only that, but Giovanni Boldini had already won two of three starts in Ireland and been third in a Group I race on the grass before making the flight across the Atlantic to compete in the Breeders Cup Juvenile Turf.  A West Virginia-bred War Front running in Ireland for Aidan O’Brien — a joke, perhaps?

But in more ways than one, Giovanni Boldini has proven to be no joke.

Not in the sales ring, certainly.  The War Front colt actually fetched $190,000 as a weanling for breeder Charles A. “Buck” Woodson, known around Charles Town as the owner and trainer of Onion Juice, the hero of the first West Virginia Breeders Classic in 1987.  Then, pinhooked and sold as a yearling, Giovanni Boldini brought the whopping sum of $675,000.

Certainly, Woodson was prescient in breeding to War Front, who has become one of the most popular sires in the country in recent years.  He was also more than a little lucky.

You see, the reason that Giovanni Boldini races in Ireland today is because Woodson, his breeder, wanted him to run in West Virginia.

Woodson had nearly sold both the colt and his dam, Dancing Trieste, privately several months before Giovanni Boldini was sold as a weanling.  Woodson spoke with a prospective owner in Florida about buying both the colt and the mare for a combined sum of $125,000. But the buyer did not want the mare — not interested in being involved in the breeding business.

“When I was at the sales in Ocala that April, I got an offer for the colt and his dam for $125,000,” Woodson said. “But he did not want the mare, so I offered him the colt for $100,000 and he agreed that was a fair price. Then I asked him where the horse would be racing and he said his stable was based in Texas and he would run at Lone Star and Sam Houston.  But I wanted to see the colt run in the Mid-Atlantic region and maybe show up for the West Virginia Breeders Classics, so I decided not to sell to him.”

Turning down the initial offer proved to be profitable for Woodson on numerous levels, although it greatly changed the life of Giovanni Boldini, who never set foot in Texas. After Giovanni Boldini was sold as a weanling for $190,000, he was later pinhooked at a yearling sale in Saratoga for $675,000, believed to be the highest price ever paid for a West Virginia-bred.  His new owners immediately sent the War Front colt to Ireland and Aidan O’Brien.

Giovanni Boldini would eventually win his career debut at Dundalk in Ireland, taking a seven-furlong event on the synthetic surface there as the 3-10 favorite with Joseph O’Brien, the trainer’s son, aboard.  O’Brien would then ride the colt — named for an Italian painter (1842-1931) known as the “Master of Swish” because of his flowing style — to a third-place finish in the Group I Vincent O’Brien National on the good turf at Curragh before returning to Dundalk to win a minor stakes on the synthetic by five lengths as the odds-on choice.

It was a long way from the West Virginia-type company Woodson had envisioned the horse keeping.

“When he started to race, I heard that he was doing well,” Woodson said. “Of course, I never saw any of his races over there, but I heard he won a couple and I was happy for the owner and trainer. It’s always a thrill to see one of the horses you bred win races, whether it’s turf or dirt or synthetic.”

While O’Brien had already stopped with his two top two-year-olds, War Command and Oklahoma City, he opted to bring Giovanni Boldini to the Breeders Cup Juvenile Turf where the War Front colt ran a tremendous race. After biding his time while favored Bobby’s Kitten cut wicked fractions, Giovanni Boldini collared the leader at the top of the lane to gain command, then was overhauled late by fellow European invader, Outstrip, in the last 100 yards.

And Giovanni Boldini’s runner-up effort in the Juvenile Turf did more than shed some light on Woodson as a breeder.  It also added immense value to his dam, Dancing Trieste.  In fact, 18 months after nearly turning her loose for $25,000 as the cherry on top of the Boldini sundae, Woodson put her in the sale at Kentucky and watched her fetch $450,000 while in foal to The Factor, another son of War Front. His patience — and, well, some sheer luck — enabled Woodson to get $640,000 for the two horses, well above the $125,000 he had nearly sold them for two years earlier.

“It always helps to have a little luck in this business,” said Woodson, who in addition to Onion Juice, whom he owned and trained, also bred West Virginia Breeders Classic winner Ghostly Thunder, trained by Gary Capuano. “I am not sure if that colt will come back to the states next year, but I plan to follow his races in England and Ireland.”

[pullquote]“It always helps to have a little luck in this business.” — Buck Woodson[/pullquote]

Actually, there is a good chance Giovanni Boldini will make at least one or two starts on this side of the Atlantic next summer.  While definitive plans have not been made for his three-year-old campaign, Giovanni Boldini prefers firm surfaces.  According to sources familiar with the O’Brien barn, Giovanni Boldini “likes to hear his feet underneath him” — firm turf — and there are numerous stakes in the United States that could fit into his schedule.  O’Brien is high on War Command, Oklahaoma City, Red Rocks Point and Johan Strauss, primarily because those colts, all of which will be three next year, prefer the softer going.

Trainer Ollie Figgins, III, who guided Dance to Bristol through a stellar campaign this year in which she won seven of 10 starts, including three graded races capped by the Grade I, $500,000 Ballerina at Saratoga, lives “less than 200 yards” from where Giovanni Boldini was foaled and raised. Figgins also bought one of his best runners, We’re In The Money, from Woodson and conditioned her to victories in West Virginia-bred stakes at ages two and three.

“I’m happy for Buck,” Figgins said. “He’s always wanted to have success as a commercial breeder and he’s done well. People always remember him for Onion Juice, but he’s been around the game a long time and he’s done well with others since then. We bought We’re In The Money off of him, and she helped get my career started by winning those state-bred stakes, and I think she’s turned out to be a pretty good broodmare.  We were all excited to see that colt run well in the Breeders Cup, and I think all of West Virginia will be rooting for him next year.”