Pin Oak Lane to be new home for Corinthian 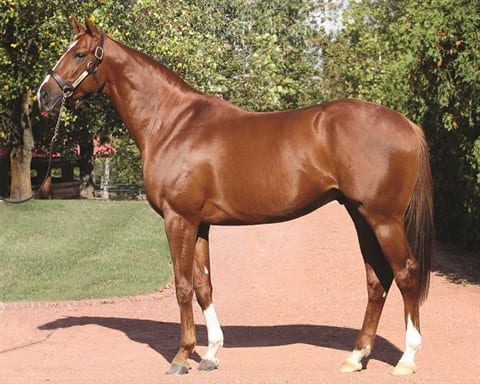 Millionaire Corinthian (Pulpit – Multiply, by Easy Goer), the best dirt miler in the world in 2007 and among the nation’s leading young sires over the past three seasons, moves from Gainesway in Lexington, Ky., to Dr. William Solomon’s Pin Oak Lane in New Freedom, Pa., for 2014. The 10-year-old son of Pulpit, who first entered stud in 2008, stands his initial Pennsylvania season for $4,000 live foal, with discounts for multiple mares.

Corinthian entered stud following a stellar 4-year-old campaign in which he won two of racing’s most illustrious dirt mile tests — the Grade 1 Metropolitan Handicap at Belmont and the inaugural running of the Breeders’ Cup Dirt Mile with a 119 Beyer speed figure. In the latter, worth $1 million and run at Monmouth Park at a mile and 70 yards over a sloppy track, he flew home a six and a half-length winner over a field that included millionaires Discreet Cat, Wanderin Boy and Park Avenue Ball. He won the time-honored Met Mile at the expense of that year’s eventual champion older male Lawyer Ron, plus additional Grade 1 winners Political Force, Latent Heat and Silver Wagon and multimillionaire Sun King.

In his first start at 4, Corinthian defeated the previous year’s Belmont Stakes-G1 winner Jazil by nine and a half lengths in a Gulfstream Park allowance, and followed with a score in the mile and three-sixteenths Gulfstream Park Handicap-G2 over Hesanoldsalt.

A winner each year from 2 to 4, Corinthian amassed $1,267,273 from 12 starts, winning six times and placing in three others. He crossed the wire first in the Fountain of Youth Stakes-G2 in his stakes debut but was disqualified to third behind First Samurai and Flashy Bull.

Ranked fourth in the nation among freshman sires in 2011 and in the top-10 on the second- and third-crop lists, Corinthian has 11 stakes horses in his first three crops, including graded stakes-placed juveniles Muppet Man and My Corinthian, the latter third in this year’s Grade 3 Bashford Manor. His runners have won stakes across the country, including Belmont, Monmouth, Oaklawn and Arlington Park, and four of his six stakes winners won at 2. He has progeny earnings in excess of $7 million, with average earnings per starter of more than $30,000. He is the sire of winners of over $3.2 million in 2013.

A half-brother to graded winner Desert Hero and the dam of stakes winner Crew Leader (by Pulpit), Corinthian descends from Special (his fourth dam), and is a member of the incredible family of leading sires Sadler’s Wells, Nureyev and Fairy King.

Dr. Solomon is looking forward to having Corinthian at Pin Oak Lane. “We expect Corinthian to be a leading sire in the MidAtlantic for years to come. He has a good number of two-year-olds, yearling, and foals going forward and is an excellent breeding stallion who consistently settles over 92 percent.”