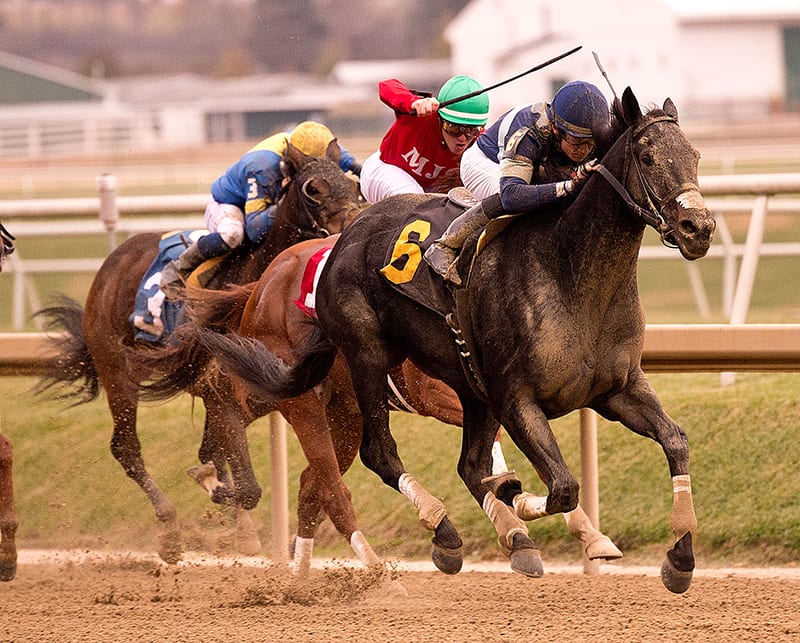 Mark B. Lapidus LLC’s Service For Ten backed off the speed, was sent into overdrive entering the turn and was up in time to capture the $100,000 Dave’s Friend Stakes.

Sheldon Russell rode the son of Service Stripe for trainer Damon Dilodovico. They completed the six furlong distance in 1:10.32 and won by a length and a half. Fersmiley crossed the finish line second but was disqualified to sixth for interference at the start. Third place finisher Escrow Kid was elevated to second and Rainbow Heir was awarded third.

Assistant trainer Mike Geralis said, “There was a lot of speed in this race and the game plan was to come from off the pace. We sat back and just picked them off in the lane. This horse isn’t flashy in the morning  but he’s very competitive around other horses. That’s when he shows his ability.”

“The race went as planned,” said Russell. “There was lots of speed in the race. As long as they didn’t get away, then I knew I had a chance with his huge late kick. The little moisture on the track keeps it honest and I was very happy at the 3/8ths pole. I tipped him out and he came running with his big kick to win.”

“I watched his first race and I was just impressed looking at him,” said the owner. “He caught my eye and I liked him so much I claimed him in his next race when he ran for $25,000. It was just the way he looked that made me want to have him.”

Service For Ten had a troubled trip in his previous start, the Frank J. DeFrancis Memorial Dash, where he was blocked on the rail and had to settle for third.  Prior to that he had won the Moscarelli Memorial at Delaware Park.