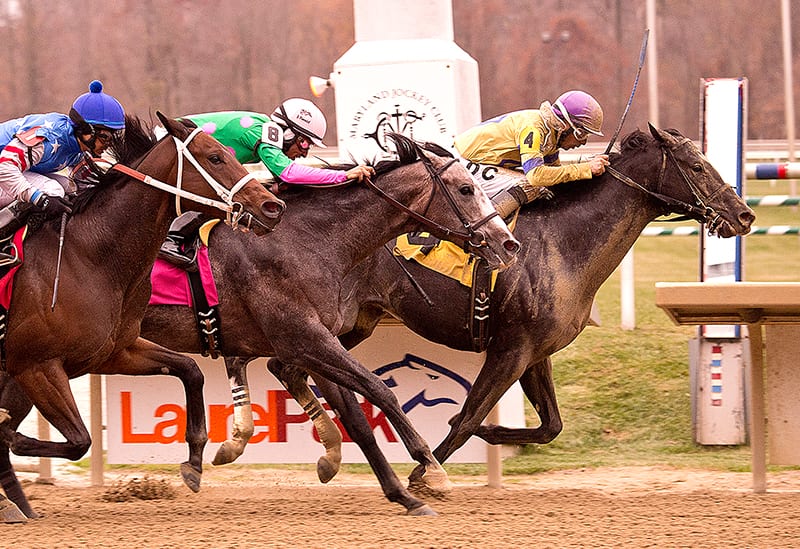 Manfred Roos & John Rigattieri’s Jessethemarine rallied from the back of the pack to win James F. Lewis III Stakes at odds of better than 35-1.

Under Daniel Centeno, Jessethemarine picked his way through traffic but was still far back at the top of the lane. He switched into another gear with a furlong to go and hit even greater acceleration as he moved by the 1/16th pole. He caught the two horses who were still in front of him in the shadow of the finish line.

The son of With Distinction won by a neck in 1:10.66 for the six furlong distance. Frontrunner Pure Sensation finished second and It’s A Bang was another neck back in third.

“The six furlongs, we weren’t too confident,” said Rigattieri, who also trains the colt. “I thought I had a decent horse but there were six speed horses in here. He wasn’t going to make the front. My jockey, Danny, is a tough rider. People in Maryland might not know that . I didn’t see my horse until the straight.  At the 1/16th I said he’ll be third. I still didn’t think he won until the announcer said he’d won. He’s run two good races now. We’ll find out what kind of horse he is next month in a  7/8ths race. Seven furlongs is more tactical.”

“I’ve been working him at Bowie a few times and he’s been doing good,” said Centeno.  “There was lots of speed in the race so I just wanted to see how they came out of the gate. At the 3/8ths pole he started dragging me and we got clear. At the 1/8th pole he gave me that extra kick to the finish. I was hoping he would make that one run today and he did.”

Jessethemarine was elevated to first from second in his previous start, the Whirling Ash Stakes at Delaware Park, after being bumped in the drive to the finish. Today he paid $73.80.