Saturday’s Laurel Park card includes the James F. Lewis III Stakes for two year-olds going six furlongs on the main track.  G2 Saratoga Special winner Corfu is favored at 5-2.  Among the 12 entrants are six bred regionally, four Maryland-breds and two Pennsylvania-breds.  One of those is It’s a Bang, the Maryland-bred winner of the Maryland Million Nursery.  We spent Maryland Million morning with It’s a Bang and his trainer, Donald Barr.

Maybe — since it’s only his second race — he hasn’t yet figured out that this disruption in his schedule means it’s race day.  Maybe he just doesn’t care.

Either way, he’s as relaxed as can be.

The same can’t be said of his trainer.

It’s a Bang was the easiest kind of winner nine days ago in his debut, in the Laurel Park slop, and he figures to go off at short odds in a couple of hours, in the Maryland Million Nursery.  He has a big chance here.

None of that does much to calm Donald Barr, whose words tumble out of him.

“These days do get your blood pressure up, to say it mildly,” he explains.  “There’s a lot of pressure on you to perform well with the horses you run.  This day and Preakness day are always a little unnerving.”

In his debut, It’s a Bang, a gelded son of Great Notion, shot almost immediately to the lead and never looked back, pulling away to win by over nine lengths.

Those, the handicappers would say, are good things: good early zip, breaking his maiden with ease, in a field, we’ll later learn, that includes a couple of other next-out winners.

That’s what the handicappers say.  The trainer?  Not so much.

“More or less, he never got challenged [in his debut],” says Barr.  “He broke well and got on his way, and you know, that creates a problem.”

What sort of problem?

“My thoughts are, ‘What happens if I don’t break so good today, the other horse gets in front, I get a little dirt in my face?  Am I going to plow through it?'”

It’s a seasoning (or lack thereof) problem.  Sure, the horse won like a good thing because, well, maybe he is a good thing.  But, the trainer wonders, did the horse learn anything?

“You got to worry sometimes about a horse that wins the first time out,” he adds.

It’s a Bang, owned by Walter Vieser, II, is a full brother to Mass Destruction, a hard-knocking sprinter also in Barr’s barn and carrying Vieser’s colors.  Mass Destruction has earned over $270,000, and he’ll run later in the card in the Maryland Million Sprint.  But Barr candidly admits that he’s not really a stakes-caliber horse; he’s a grinding type who’s an inch or two less talented than some of his rivals.

Whether It’s a Bang is a stakes-caliber animal remains to be seen; a definitive answer is still a couple hours in the future.  But, Barr says, the horse he calls Banger’s flashy debut meant that he had to come here.

“After his first performance, I have to go there [to the Maryland Million],” he said.  “Otherwise, I wouldn’t be doing justice to the owner or the breeder.”

Of course, he hastens to add, “I’m kinda proud of participating.” 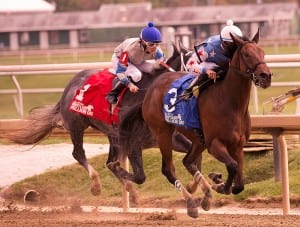 It’s a Bang was 29-1 in his debut.  When the gates open for the Nursery, he’s just 2-1, the second favorite behind Joint Custody.  Those two hook up in the early stages of the six furlong race and slug it out, heads apart, for five furlongs.  Then, gradually, It’s a Bang gets the advantage, wears his rival down, and wins by 1 1/2 lengths.

Though Barr still has two to saddle, a wide smile replaces the furrowed brow he’s carried all day.  “We’re in the right place now,” he says.  “It’s easier when you get one in.”

“He’s a really gutty horse,” he says of Banger.  “And I think he’s going to be a very good horse.”

What impressed Barr, and rider Richard Monterrey, is the way It’s a Bang finished.  After knocking heads with a solid contender for five furlongs, he still had enough to put away his speed rival and hold the closers safe.

“I think he’s got more tank left, and I think as he grows, he’s going to get better,” said Monterrey.  “And Donald Barr is doing a great job with him.”

Barr’s other runners on the card, Mass Destruction and maiden Delaney’s Star, don’t do much, and after the fourth, his racing day is over.  He takes a moment to reflect on the stable’s newest star.  “I really think the future’s pretty bright with this horse,” he says as he heads toward the barn and then home.

Asked why he’s not sticking around for the rest of the card, he laughs and says, “The beer’s cold a lot of places, you know what I mean?”