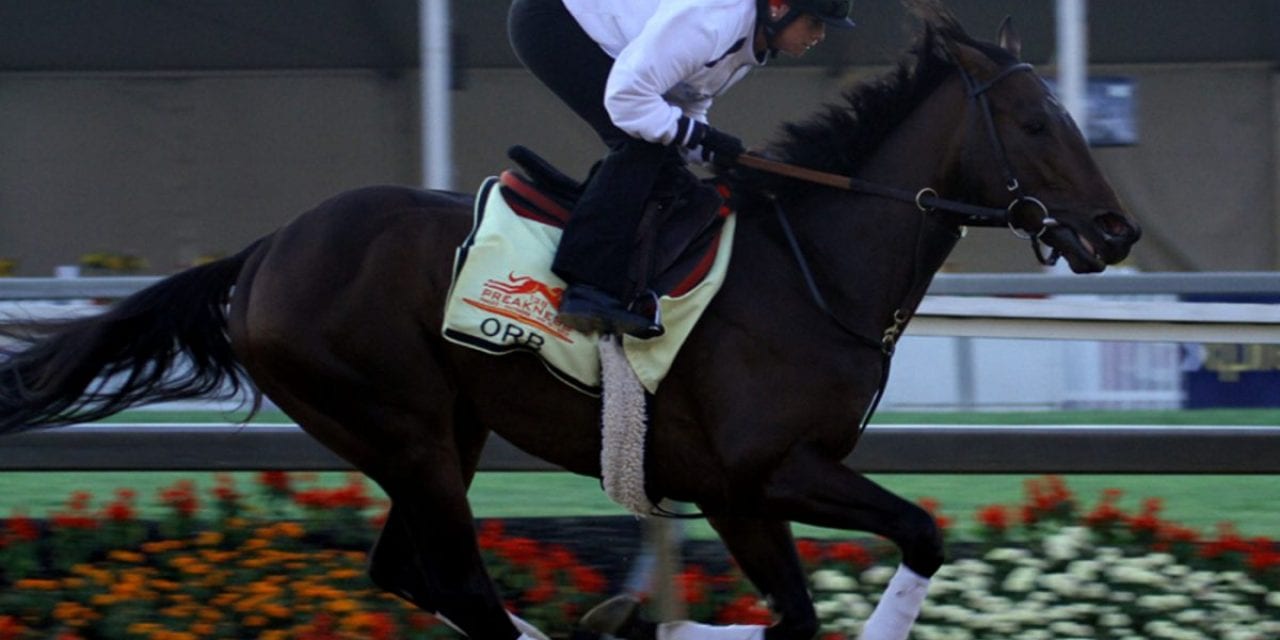 So, in fact, are any number of good racehorses, all moving on to the next phase of their lives, as breeding stock.

None of which comes as any surprise.  It’s that time of year, after all, the traditional end of the racing season — even if it grinds on — and the time when breeders begin to think about the next breeding season.  And it is, as we are often reminded, a business.

“One of the only things I don’t like about this business is that it’s a business,” Miz Direction’s owner, radio (and television) personality Jim Rome, said (here) in the moments after his talented mare had won her second consecutive Breeders’ 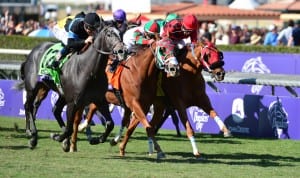 “It’s gut‑wrenching,” he added.  “It’s tearing me up, but from a business standpoint, and this is a business, it’s something we need to do.”  On the other hand, the $2.7 million his mare fetched at Monday’s Fasig-Tipton sale figures to ease the sting, if just a bit.

While I can’t generate much sympathy for Mr. Rome — the rich, after all, get richer — it seems to me that he points out an important truth.  The Thoroughbred industry is a business — but it’s a business whose incentives are misaligned and consequently contribute to the decline of the sport.

Consider this: In a three-year racing career, Mizdirection won 11 times and finished out of the money only once.  All but three of her starts came in stakes company.  All told, she earned more than $1.7 million.

That meant that Rome’s choices boiled down to: bring her back, and if she stays sound and continues to run in top form — both big ifs in a sport where only uncertainty is guaranteed — she might make around $700,000 to $800,000.  Or sell her for more than three times that amount.

Or take the case of Orb.  He’s been retired to stud at Claiborne Farm (here), where he’ll stand for $25,000.  Were he to breed 100 mares at his advertised price, he would earn nearly as much in his first year in the breeding shed as the $2.6 million he won on the racetrack.

What’s more, as a racer, his best earning days are likely behind him.  Ten of the 15 American dirt or synthetic races over one mile that carry purses of at least $1 million are restricted to three year-olds.  He ran in six $1 million races this year; that’s an opportunity he would not have as an older horse.

From a business standpoint, retiring him could not have been a difficult decision.

And that’s exactly the problem.  While Mizdirection has already reached as high as she likely could — with consecutive Breeders’ Cup wins — Orb’s career ends more as a question than a statement.  Yes, he won the G1 Kentucky Derby (and the G1 Florida Derby) — but his post-Derby season was a decidedly mixed bag.  What kind of four year-old might he have been?

We won’t know now, but then again, these days, we rarely do.  According to data compiled by McKinsey and Company for The Jockey Club, the average lifetime career starts for the top three Kentucky Derby finishers has declined from more than 25 in 1990 to just 8 in 2008.  In that light, Orb’s 12-start career is a virtual throwback.

This isn’t just a matter of academic interest.  The stars of the show, after all, are the horses and when their moment of greatest triumph occurs not on the racetrack but in the sales ring or the breeding shed, that has real consequences for the industry.  In the short term, of course, it robs the fans of their rooting interest and the sport of a means of reaching outside its own narrow boundaries to engage a broader audience; in the longer run, it sends a clear message to fans and bettors: you don’t matter.

Zenyatta ran an “extra” year and became a cross-over star; the gelding Wise Dan is gradually building fan support.  It takes time to do that.

[pullquote]What, as the commercial asks us, is better: a large pile of money today, or a much smaller pile that may or may not come at some point in the future?[/pullquote]

In the wake of the Orb announcement, fans reacted in an entirely predictable way: with anger and frustration.  “This sport, sometimes,” one said, with a defeated-sounding air, on Facebook.  “Infuriating,” Horse Racing Nation deemed it (here).

But what to do?  The owners are, as Jim Rome noted, responding rationally to the incentives before them — as most of us would do in the same circumstance.  After all, what, as the commercial asks us, is better: a large pile of money today, or a much smaller pile that may or may not come at some point in the future?

But you can change the system in which they operate: better purses for older horses, for example, and some concerted industry effort to promote those races.  Another change might be restrictions on the offspring of young stallions; some harness tracks, for example, exclude from stakes races the offspring of stallions retired at age four.  That, some believe, is having a positive impact in getting stars to stick around.

“Give me a… lever,” Archimedes said, and, “I will move the whole world.”

Change the system in which horse owners operate, and you’ll see more stars on the track longer.

It’s all  in the incentives.