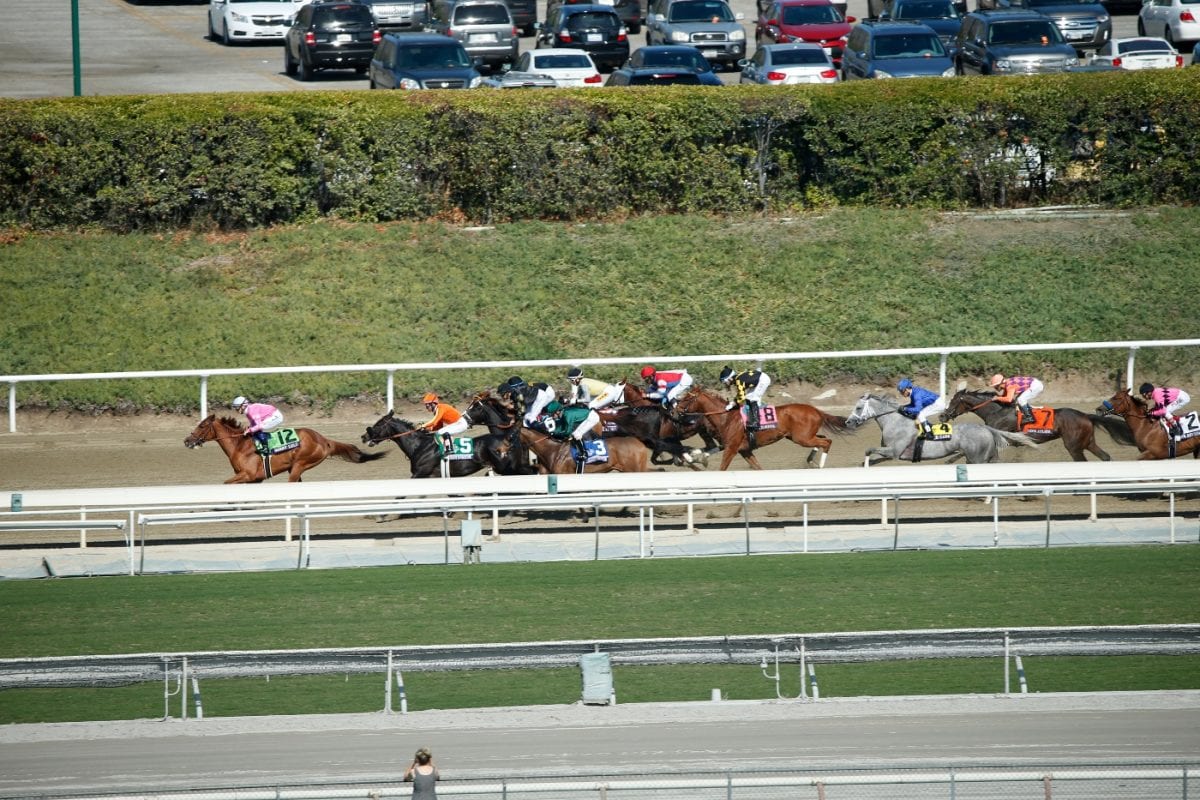 When the field turned for home in the $1 million, Grade I Breeders Cup Filly and Mare Sprint at Santa Anita on Saturday afternoon, Dance to Bristol was sitting seventh and had clear sailing.  Rider Xavier Perez angled the filly wide for the stretch drive and began urging her seriously.

But nothing happened.  For the first time in 10 starts this year, Dance to Bristol failed to deliver her usual late kick.

The four-year-old filly flattened out and finished sixth.  When she came back to unsaddle, a puzzled trainer Ollie Figgins, III immediately had his answer. 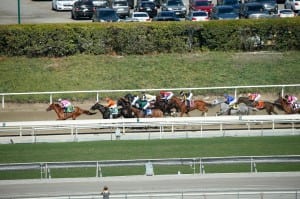 They’re off in the Filly and Mare Sprint. Dance to Bristol (#8) is mid-flight. Photo by Breeders’ Cup Ltd.

“She apparently bled through her Lasix, and that probably explained why she didn’t have her usual kick,” Figgins said. “She had some blood dripping out of her left nostril. It was really dry out there and maybe that had something to do with it.”

It was not the finish Figgins had hoped for.  Dance to Bristol emerged on the scene this summer by winning three graded races in New York, capped by a narrow, determined victory over Book Review in the Grade I, $500,000 Ballerina Stakes at Saratoga. That victory guaranteed the Bowie-based filly a berth in the starting gate for the Breeders Cup Filly and Mare Sprint and stamped her as one of the legitimate contenders for the Eclipse Award as division champion.

And she’d done all that without missing a race or even a work all year long.  “She had never [bled through the Lasix] before, so the timing could not have been worse,” Figgins said.  “But those things happen in racing, unfortunately.”

What’s more, Dance to Bristol had a full coterie of supporters at the track — including Figgins’ wife and daughters and owners Susan and David Wantz — expecting to see the type of performance they’d witnessed all year.

“My filly likes to sit and make one big run and the track last weekend was really fast,” Figgins said. “She likes to move on the turns and they were still moving pretty good at that point. When Groupie Doll and Judy The Beauty kicked for home, my filly just didn’t stay with them.”
[boxify cols_use =”5″ cols =”5″ position =”left” order =”none” box_spacing =”5″ padding =”5″ border_width =”2″ border_color =”blue” border_style =”solid” height =”60″ ]

Reserved early, Dance to Bristol made a middle move into contention before flattening out.  Groupie Doll cleared in early stretch, then just held off the late charge of Judy the Beauty to earn the win, her second straight in the event, in 1:20.75 for seven furlongs.

Susan Wantz added, “Dance to Bristol really deserved to be there. We had already beaten almost all the horses in the field. It was a shame she bled through the Lasix, but a lot of horses from the East Coast had trouble with that.”

Still, neither Figgins nor the Wantzes seemed inclined in the aftermath to dwell on the one disappointing race.

[pullquote]”Anytime a small-time trainer like me gets a horse like this and you get a chance to run in graded stakes at Saratoga and then race in the Breeders Cup, that’s a dream come true for any trainer. She’s always going to mean a lot to me.” — Ollie Figgins, III[/pullquote]

“It was really exciting to be out there,” Wantz said. “I had the chance to meet a lot of celebrities in racing, including some horses like Mucho Macho Man and Royal Delta and Princess of Sylmar and Game On Dude.”

Indeed, her campaign actually began in the latter stages of 2012, when she returned from a several month layoff to run second in a Charles Town allowance.  Saturday marked the first time in 10 starts this year that the Speightstown filly failed to finish first or second.

Figgins steered her to a seven-race winning streak during the season, a run which included five consecutive stakes wins, three in graded company.  And she’d won her last three starts at Saturday’s seven-furlong distance.

The winning streak ended in her final prep race for the Breeders Cup, the Grade II, $300,000 Gallant Bloom at Belmont Park.  Sent off as the lukewarm 2-1 favorite, Dance to Bristol proved no match for the undefeated Cluster of Stars, whose connections opted not to pay a $100,000 supplemental fee to enter her in the Breeders’ Cup.

Figgins began to gear Dance to Bristol for the Breeders Cup last month with a pair of five-furlong workouts. She breezed the first one in 1:01.60, then worked a sharp :58.60 on Oct. 25 at Bowie and boarded a cargo plane at Baltimore-Washington International Airport for California the next morning. She galloped over the Santa Anita strip Tuesday-Friday to get acclimated to the surface and then awaited for the gate to open in the most important and likely final start of her career.

Dance to Bristol did not add to her bankroll on Saturday.  She concludes the year with seven wins and two second-place finishes from 10 starts and over $820,000 banked. She has won 10 of 20 career tries and remains less than $20,000 shy of reaching the $1 million mark in lifetime earnings.

While her racing career is likely over, Dance to Bristol will soon begin a new career as a broodmare and her value in that role could reach seven figures.  That, of course, matters to the connections; so do the memories. 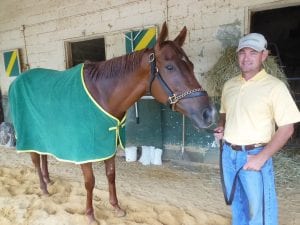 “It was quite a ride with her,” said Figgins.  “Anytime a small-time trainer like me gets a horse like this and you get a chance to run in graded stakes at Saratoga and then race in the Breeders Cup, that’s a dream come true for any trainer. She’s always going to mean a lot to me.”

Susan Wantz agreed, but is more inclined to look forward than back.  “She was such a tremendous race horse,” she pointed out.  “But that was her last race. I want her to enjoy her retirement. In fact, we’re going to have a retirement party for her next week when she gets back from Bowie. I am just amazed at how many people followed her career. She was such a special horse and I want her to have a good home throughout her retirement. We might keep her, but we might sell her privately. I just want to make sure wherever she goes that she has a good home.”