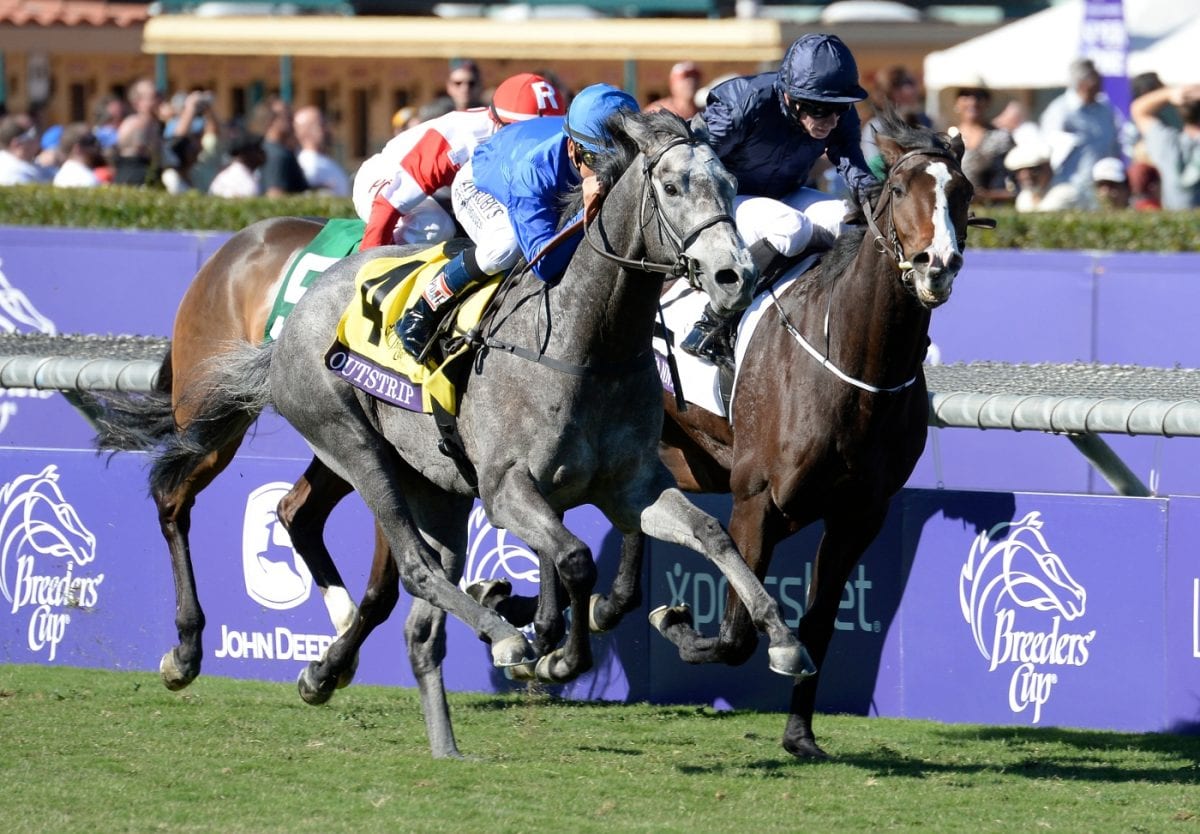 It was an odd Breeders’ Cup Friday for horses bred in the mid-Atlantic region.

On a day when the absurdly strong speed bias turned Santa Anita’s main track into something resembling the 405, their best dirt result came from a speed horse who took back off the pace.  Meanwhile, the best turf result came from a West Virginia-bred based in Ireland.

And what appeared to be their best chance at a win, in the Distaff, came acropper when Princess of Sylmar stumbled out of the gate and never ran a step en route to a startling last place finish.

At the top of the day, both Virginia-bred Blueskiesnrainbows (sent off at 7-1 in the Marathon) and West Virginia-bred Giovanni Boldini (4-1 in the Juvenile Turf) stalked solid paces set in front of them, surged to the lead in mid-stretch, and then could not contain the late rallies of London Bridge and Outstrip, respectively.

In the case of Giovanni Boldini, that he might sit off the lead, make a move, and be there on the wire was no great surprise.  He went off as the second favorite, with two wins in three starts, and had thrived using a stalk-and-pounce style.  His trainer, Aidan O’Brien, noted in The Blood-Horse, “He’s run a great race.  I have no complaints. He was just run out of it again.”

For Blueskiesnrainbows, taking back off the pace — something he’d shown only limited ability or inclination to do previously — proved nearly to be a winning strategy.  The speedy Commander set a solid early pace, with Blueskiesnrainbows tucked back in fourth.  When the leader began to tire, jockey Martin Pedroza moved Blueskiesnrainbows forward in company with two others.  He put those away in mid-stretch but had no answer for the late-charging London Bridge and finished a length behind that one in second.

But if the day began with high hopes and good results, it ended with something altogether different.  A pair of Pennsylvania-breds, longshot Street Sailing (46-1) and second-favorite  Princess of Sylmar (5-2), beat just one horse — combined.

It was a day that began with high hopes for the Princess of Sylmar crew, including owner Ed Stanco.  Their horse appeared to be a virtual lock for an Eclipse for three year-old filly honors, and there was muted chatter about her as a Horse of the Year contender — if she could win the Distaff, and if Game On Dude and Wise Dan faltered.

Still, even if he owns only one racer, Stanco isn’t a naif when it comes to racing.

“You know, it’s a horse race, and anything can happen in a horse race,” he told our Teresa Genaro back in August before the Alabama at Saratoga (here).  “We all know that.  So we just want her to get over the track, come back healthy, and if she can pass the rest of them, that’d be great.”

She got over the track and reportedly came back healthy — but she didn’t pass any of them.  When it was over — when she’d labored home last, even behind hopeless longshot Street Girl — the muted Horse of the Year conversation had died down.  Possibly, even the three year-old filly title may have been lost, as sophomore Beholder’s tour de force triumph in the Distaff may allow her to steal off with the hardware. 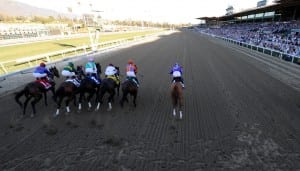 Foreshadowing: Princess of Sylmar breaks outward and behind the field in the first jumps of the Breeders’ Cup Distaff. Photo by Breeders’ Cup Ltd.

As Saturday dawned, Midlantic-breds still retain three shots to secure a win, and all appear to be live.  Maryland-bred Havelock (10-1, Turf Sprint), Virginia-bred Bond Holder (6-1, Juvenile), and Pennsylvania-bred Real Solution (8-1, Turf) all appear to be heading into their races in good shape with two — Havelock and Bond Holder — entering off victories.