One exercise rider, with two big chances in the Breeders’ Cup

For a woman who doesn’t like the city, Maryland’s Annie Finney has made quite a name for herself on the New York circuit.

A native of the greater Baltimore area, Finney has worked since 2011 as an exercise rider for Todd Pletcher; based at first in Saratoga and now at his Belmont barn, she works in New York for the spring, summer, and fall, returning home to the mid-Atlantic for the winter.

“I like to go home and hang out,” she said last weekend, sitting outside Pletcher’s barn. “I like playing in the snow and visiting with my family.” 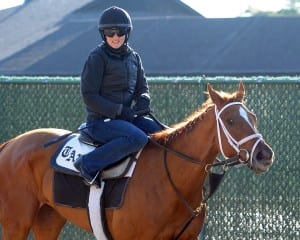 Annie Finney, aboard Princess of Sylmar, grins for the camera. Photo NYRA/Adam Coglianese.

Now, though, Finney is in neither New York nor Maryland: she’s in California with the two horses that she’s been getting on this fall, two of the stars of the Pletcher barn: Princess of Sylmar and Palace Malice, a duo that may well be the winners of this year’s Distaff/Classic Breeders’ Cup double.

“I got the racing bug from him,” she said, acknowledging that she was too little at that point to ride the “real racehorses.”

“But I had those ponies tuned up!” she said with a laugh.

Attending high school at Oldfields School in northern Baltimore County, in the heart of Maryland’s hunt country, Finney rode steeplechase races in her teens, hoping to become a flat jockey when she graduated in 1997. When that didn’t work out—“I’m not a natural lightweight, and I like to eat,” she said—she worked for trainer Dickie Small, traveling with his horses to the  Fair Grounds in the winter and to Pimlico and Monmouth in the summer.

Her work at Fair Grounds and a move to Kentucky in 2000 brought her in contact with Neil Howard’s operation, specifically his assistant Joe DeSantis, for whom she worked for nearly eight years.

[pullquote]“He’s the love of my life.  Seriously. He’s the coolest horse ever.” — Annie Finney, on Palace Malice[/pullquote]

Among the horses Finney rode then were 2003 Horse of the Year Mineshaft and stakes stars Alumni Hall, Quick Tip, and Rock Slide, a full brother to Mineshaft and a stallion in his own right, standing at Shamrock Farm in Maryland.

“It was so much fun working for them,” she said, “because we had a lot of horses from the same family, so it was kind of interesting to see how they were similar.”

Finney left Howard’s operation in 2008—“I was DONE with racing,” she said—and worked on a farm for Maryland trainer J.B. Secor, but she found that she missed life on the racetrack, and that’s when she began working for Pletcher.

She was there in New York when the Pennsylvania-bred Princess of Sylmar arrived a year ago, and she was not, she admitted, immediately impressed.

“I got on her a little bit then and she was always very nice,” Finney remembered. “She’d breeze really well, but she was kind of small and unassuming.”

By implication, Pletcher uses similar adjectives to describe Finney, explaining why she’s on his stable stars.

“She’s a very good rider,” he said. “She’s quiet, she’s got very good hands, and she just seems to get along with a lot of horses very well. Sometimes just keeping it simple is just the easiest approach.

“Whatever it is that makes some people a better rider than others, she has.”

[pullquote]“Whatever it is that makes some people a better rider than others, she has.” — Todd Pletcher, on Finney[/pullquote]

“Pretty much all of Team Belmont got to ride her a little bit,” she explained. “I like that because it makes it kind of a team thing.”

And while she’s enthusiastic about Princess of Sylmar, Finney reserved her most effusive praise for stablemate Palace Malice.

“He’s the love of my life,” she said. “Seriously. He’s the coolest horse ever.”

Though she’s been getting on both horses regularly, she was still surprised when she was told she was going west. The Breeders’ Cup will be her first trip to California.

“What can I say?” she asked rhetorically. “I’m very lucky. It’s been great working here. I was so intimidated at first, but they get the best horses and the best people. It’s a good spot.” 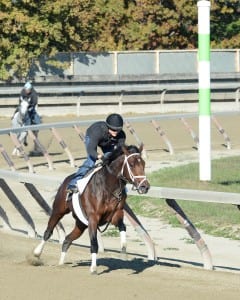 Finney and “the coolest horse ever,” Palace Malice, get their morning exercise. Photo NYRA/Adam Coglianese.

She still keeps a place not far from Oldfields, and while the plan is still to head to Maryland for the winter, she’s also considering staying at Belmont.

“I don’t mind the cold, and I’m going to need a new car,” she said. “I might as well work a little bit harder.”

But with a 3-year-old niece and a new nephew in Maryland, along with her parents, Finney feels the pull to the Mid-Atlantic.

“My family would kill me if I didn’t go home at all,” she said. “I haven’t even met my nephew.”

Then she added, “I don’t really plan too far ahead. I figure I usually end up where I need to be.”

And this weekend, that’s at Santa Anita, riding two horses with a very good chance of coming home winners.

(Featured image, of Finney aboard Princess of Sylmar, by Teresa Genaro.)