“Just one of the guys,” Dance to Bristol readies for last, and most important, race 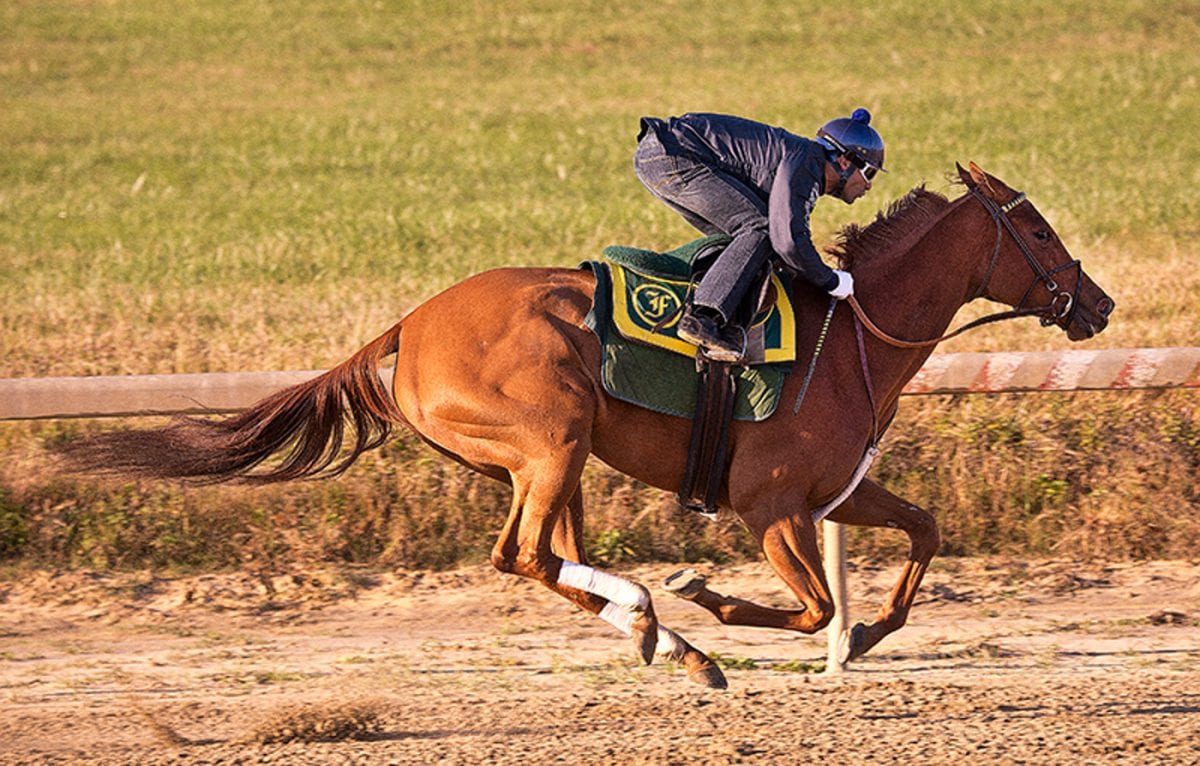 Soon after the post positions were drawn for the Breeders’ Cup Filly and Mare Sprint set for Saturday afternoon — 1:21 p.m. Pacific, 4:21 p.m. Eastern — trainer Ollie Figgins, III, realized something that he found both surprising — and yet, not at all surprising.

Dance to Bristol, the filly he trains for Susan and David Wantz, is, at 5-1, the second favorite, behind only defending champ Groupie Doll, who’s 5-2.

On the one hand, the morning line reflected the track handicapper’s belief that the public will back Dance to Bristol with confidence, even if she isn’t from the most glamorous of barns or backgrounds.

On the other, it validated something that Figgins already knew: his horse belongs.  “It’s a good field,” Figgins observed, “but my filly has been up to the task so far.”  (Video of her final breeze before the Breeders’ Cup is at right.)

Dance to Bristol, Figgins, the Wantzes, and rider Xavier Perez may not be household names outside of the Mid-Atlantic region.  And the Bowie Training Center, where she is stabled, is expected to be shuttered once sufficient stalls exist at Laurel and Pimlico to house its residents.

But the filly, like several of her rivals, is probably one more win away from garnering an Eclipse Award as champion filly and mare sprinter for 2013.  Certainly, with a win, she’ll deserve the award.  The daughter of Speightstown has won seven of nine starts and banked over $800,000 this year.  That ledger includes a victory in the Grade I, $500,000 Ballerina Stakes at Saratoga over Book Review, the 6-1 third choice on the morning line for Saturday’s race.

Last Friday morning Dance to Bristol tuned up for the final start of her campaign – and probably her career – by breezing five furlongs in a zippy 58.60 with Perez aboard.  The following morning she departed Baltimore-Washington International Airport for a cross-country flight and by late afternoon was at Santa Anita.

She galloped over the track on Monday, Tuesday and Wednesday mornings and then is expected to have paddock schooling on Thursday and Friday before heading to the track for real on Saturday.

“My groom, Juan Arias, was on the flight out of BWI with her on Saturday and then Oscar Mancilla and Jesse Cruz flew out here with me on Saturday night,” Figgins said. “Everything went well, and she went over the track well on Monday and Tuesday. Nothing’s changed. We’re right in the stall next to Gentlemen’s Bet, who is in the Breeders’ Cup Sprint on Saturday, so we get a chance to talk and I think the two horses have had a chance to get to know each other.”

Casual racing fans may know of Groupie Doll, who won last year’s Filly and Mare Sprint with an impressive rally.  They may know of the exploits of Book Review, and certainly they’re familiar with her trainer, Hall of Famer Bob Baffert.

Dance to Bristol, on the other hand, has entered the public consciousness the old-fashioned way: she’s earned it, race by race.

[boxify cols_use =”2″ cols =”5″ position =”left” order =”none” box_spacing =”5″ padding =”5″ border_width =”2″ border_color =”blue” border_style =”solid” height =”85″ width =”50″ ]To hear a 45-second clip of Ollie Figgins, III discussing Dance to Bristol’s last work, plus her routine and the barn’s excitement…[sc_embed_player fileurl=”https://www.theracingbiz.com/wp-content/uploads/2013/10/figgins1030.mp3″][/boxify]”Everything she’s done this year she’s done well,” said Figgins, who has saddled Dance to Bristol to five stakes victories, three of which were graded. “She’s gotten some recognition even just being here.  When she beat Book Review at Saratoga that put her on the map.  She was good before that, but beating Book Review made people notice her.  Now we’re coming to Book Review’s home course, so we’ll see if we can beat her here after we had to travel.”

Book Review, who is lined as the third choice and wouldn’t surprise anyone if she went off as second choice, has a win and three seconds from four starts this year.  Her lone win came in the G2 A Gleam at Hollywood Park.  At Santa Anita, now her home track after beginning her career with Chad Brown in New York, she has a win and two seconds in three starts.  She figures to run well again on Saturday.

Groupie Doll poses a different handicapping challenge.  Groupie Doll has won only one of three starts this year, and her two setbacks left onlookers wondering whether her best days are behind her.  She failed as the 1-5 favorite in her return against Grade III company at Ellis Park, won the G2 Presque Isle Downs Masters in record time, and then settled for third in the G2 Thoroughbred Club of America at Keeneland behind Judy The Beauty, who is also on hand for the F-M Sprint this Saturday.

Judy the Beauty, also lined at 6-1, enters off that victory, her first in graded company.  She’s finished first or second in 11 of 12 career starts.

[pullquote]All we can do know is hope for a clean trip, a little luck and for her to run her race.  She could not be coming into it any better.” — Ollie Figgins, III on Dance to Bristol[/pullquote]

Dance to Bristol has yet to run against either Groupie Doll or Judy The Beauty this year.  Judy The Beauty was going to be the second or third choice at post time for the Ballerina when she was scratched in the gate after being bothered by a fractious rival in a neighboring stall.  Groupie Doll, meanwhile, plotted a shorter and easier campaign.

“There are definitely a lot of good ones in there,” Figgins said. “Groupie Doll is the defending champion, and she likes the track and the distance.  Judy The Beauty is an honest mare.  She runs her race every time.  Dance Card was third behind us in the Gallant Bloom, and Starship Truffles won the big race [Grade I Princess Rooney] at Calder, but we beat her in the Ballerina.”

Although Dance to Bristol has enjoyed the type of season that will help prospective owners take notice of Figgins, she is not his first Breeders’ Cup starter.  Five years ago, Figgins sent Rouse The Cat to Santa Anita for the Breeders Cup Turf Sprint where the reformed claimer finished 12th in a field of 13.  Rouse The Cat was not among the serious contenders for the race and Figgins took the defeat in stride after a week of feeling overwhelmed by the grand scale of the event.

“The first time I came out here with Rouse The Cat, I really didn’t know what I was doing yet,” Figgins said. “I had only had my trainer’s license for two years and I wanted to see him run in the Breeders Cup. He had run well in several preps, but he didn’t win any of them.” 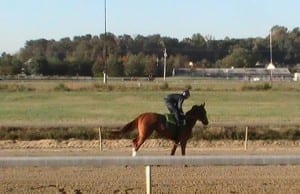 Dance to Bristol on the Bowie Track for her final pre-Breeders’ Cup breeze. She went five furlongs in 58 3/5 seconds.

Figgins says he’ll be able to look around a little bit more and take in the atmosphere this time.  In part that comes from experience; equally, it comes from confidence.  “She’s won a Grade I, a Grade II and a Grade III and she’s won races at five different tracks already this year,” he pointed out.  “She deserves to be in there with those other mares, and it’s a little easier to relax knowing that you have one of the best horses in the race.”

Since Figgins put her campaign in motion last winter, Dance to Bristol has not missed a race or even a workout and after her long, smooth cross-country flight, the filly is perhaps set for her swan song performance. When the gate opens Saturday afternoon, Figgins, the Wantzes and Perez will be associated with the filly as a runner for the last one minute and 22 seconds of her career; everything they have worked for over the last 11 months will be decided in that brief span.

“I like where we drew [post position eight] and I like the way the track out here is playing,” said Figgins, whose wife, Clarissa, and daughters, Kelsie and Emilie, were slated to arrive Wednesday evening. “It is definitely fast but fair.  All we can do know is hope for a clean trip, a little luck and for her to run her race.  She could not be coming into it any better.  I know she’ll run her race.  Now we’ll see if she’s good enough to beat Book Review on her home track.”