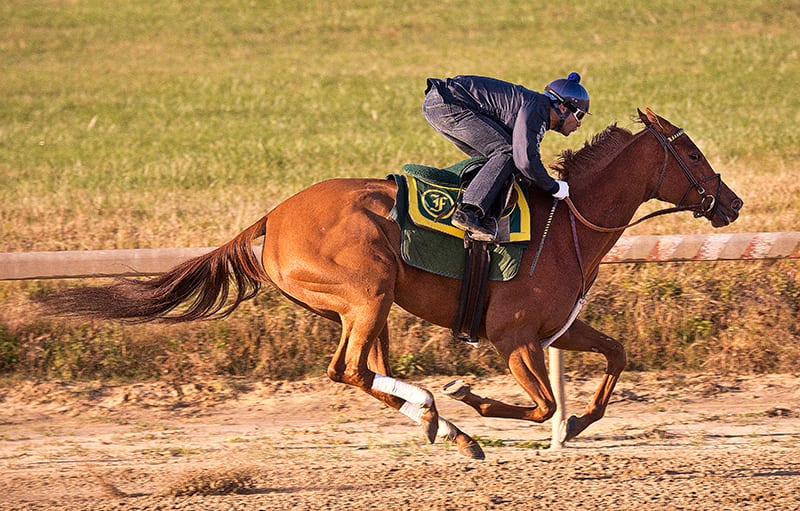 Dance to Bristol put in her final work at the Bowie Training Center Friday morning, eight days before the $1 million Breeders’ Cup Filly & Mare Sprint (G1) at Santa Anita Park. The Ollie Figgins III trainee stopped the clock in 58.60, the fastest drill of the morning at the 5-furlong distance. Regular rider Xavier Perez was aboard.

“That is what we needed today,” Figgins said. “I generally don’t like to let her rock that much but I usually work her seven days out. Today we are eight so I wanted a little more.”

Dance to Bristol has won seven of her nine starts this year, including three graded stakes races. The daughter of Speightstown began her 4-year old campaign with a second place finish in the What A Summer Stakes at Laurel Park in January.

Then with Perez picking up the mount, the filly reeled off seven straight victories from February through August, including a win in the Skipat Stakes at Pimlico Race Course on Preakness weekend and three graded races in New York: Bed Of Roses (G3), Honorable Miss (G2) and Ballerina (G1).

“To have the opportunity to ride a horse of this caliber is a dream come true,” Perez said. “We are going to the Super Bowl of racing, going against the best of the best. It is an unbelievable feeling to know that I am going into the race with a horse that has a shot to win the race. We have been competing against most of the same runners next weekend.”

The Filly & Mare Sprint is also expected to feature defending champion Groupie Doll and Book Review, who finished behind Dance to Bristol in the Ballerina at Saratoga.

Figgins indicated his star would ship to Southern California tomorrow morning. A victory next Saturday would likely mean an Eclipse Award in the filly and mare sprint division.

“We have a very live shot and I always feel that with her,” added Figgins. “Every time she goes to the gate I feel like she is going to be the winner because she gives it her all. It is a great thrill to have a nice horse with the talent to go to New York and win graded races. The Bed of Roses performance was the race where I knew she was a horse of that caliber. It has been a lot of fun.”

Dance To Bristol has 10 wins and eight second place finishes in 19 career starts with earnings of $980,880. She has raced nine times in Maryland during her career with five victories and four runner-up finishes. She broke her maiden on Oct. 29, 2011 at Laurel and also captured the 2012 Marshua Stakes at the central Maryland track.

Beginning tomorrow afternoon, Laurel Park’s first post will shift to 12:35 p.m. for the balance of the calendar year. Live racing continues on a Wednesday through Saturday schedule (with holiday exceptions) through Dec. 31.