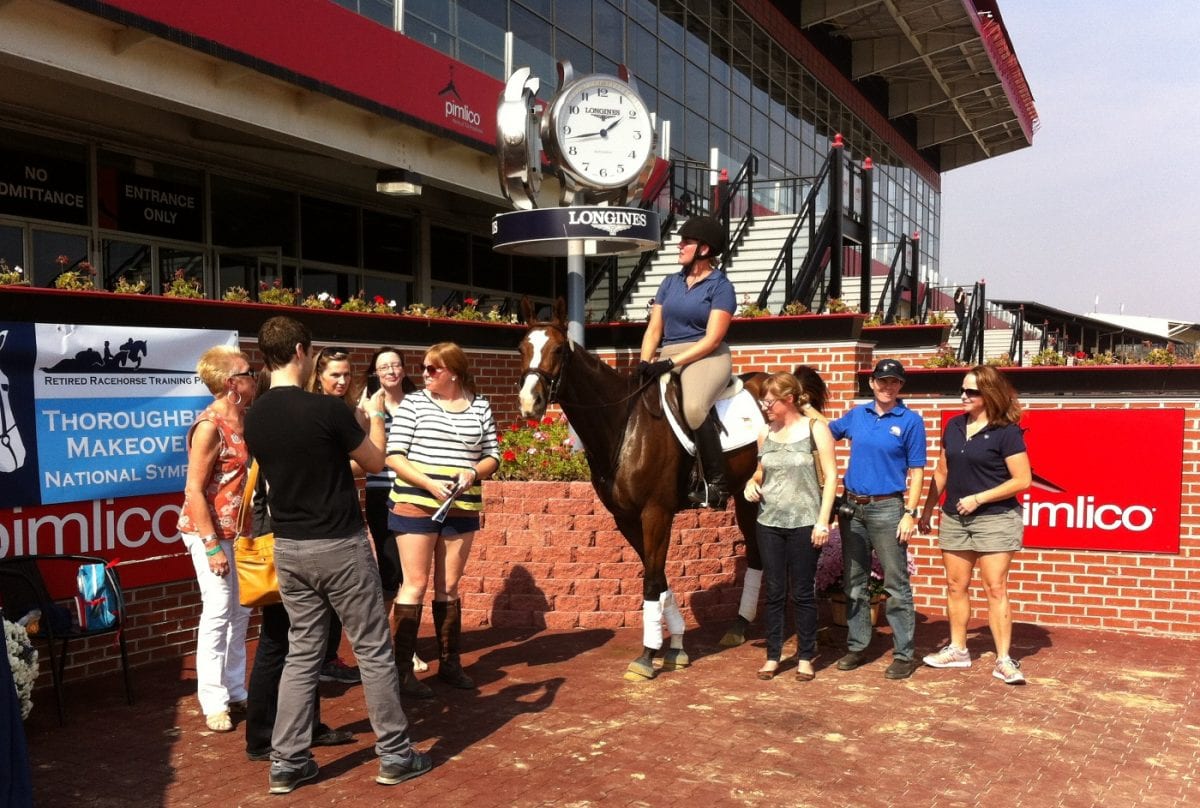 “The economic story here is that you can re-establish the value of the horse in a second discipline,” said Carolyn Karlson, Vice-President of the Retired Racehorse Training Project on Sunday, during the organization’s Thoroughbred Makeover.

[boxify cols_use =”2″ cols =”5″ position =”left” order =”none” box_spacing =”5″ padding =”5″ border_width =”2″ border_color =”blue” border_style =”solid” height =”85″ width =”50″ ]To hear a 45-second clip of Carolyn Karlson discussing retired racehorses…[sc_embed_player fileurl=”https://www.theracingbiz.com/wp-content/uploads/2013/10/ckarlsononretiredhorses.mp3″][/boxify]Below, on the Pimlico track, two dozen retired Thoroughbreds demonstrated what that discipline might be: anything from polo pony to cutting horse and everything in between.  And, indeed, Karlson’s point was made; several of the horses reportedly sold during the two-day event.

As racehorses, they ranged from not much all the way on up to the aptly named Stud Muffin, a nine year-old gelding who won more than $670,000 in his career.  But all possessed the Thoroughbred’s quickness, athleticism, and trainability — traits that enable them to succeed in many activities. 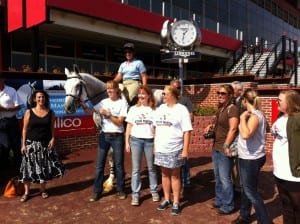 Stud Muffin, along with his people, hams it up in the Pimlico winner’s circle.

The Project “increases demand among… recreational riders… for Thoroughbred ex-racehorses,” according to its materials, in large measure by educating those riders about the qualities of the Thoroughbred.

And yet if recreational riders are one audience, racehorse owners and trainers are another.

“All racehorses have the prospect of doing something else,” Karlson added, a message equally important to both audiences.

And Georgeanne Hale, the racing secretary at the Maryland Jockey Club who has been actively involved in these efforts, said that the Makeover “showed a lot of our owners — hey, my horse could do something else.”

At some level, many involved with end-of-career horses see their care as a moral issue.  Taking care of the horses who give us such joy, they say, is imperative; it’s what a civilized people does.

Yet at the same time, the care of end-of-career horses may be one of the most critical business issues facing the sport.  Names like Ferdinand — the star racer eventually slaughtered in Japan — continue to have remarkable currency, and the recent post-race death of one-time Grade 1 winner Monzante — in a bottom-level claimer — caused a brief but sharp firestorm of criticism.

When horses that shouldn’t be running die at the races, or fail to receive adequate end-of-career care, that’s not just an issue between owner and horse.  It’s a problem that blackens the eye of the entire racing and breeding industry.

“If racing had a built-in failsafe program [for retired horses],” Karlson said, “then I think we all win.”

She’s right, and that’s where racing ultimately needs to go.  Though expensive, a comprehensive program to care for the sport’s retired equine athletes will in the long run be much less expensive than trying to undo the damage that accrues each time a horse like Monzante dies, each time a retiree ends up at slaughter.

“The value of the racehorse is the heart of the sport,” Karlson said.