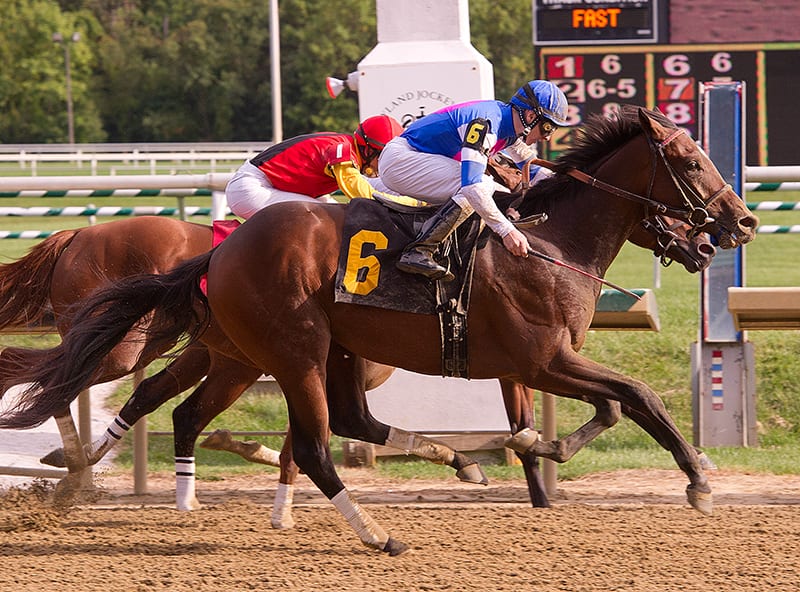 High Five Racing’s Emotional Stroll was up in the final jump to win today’s seventh race at Laurel Park, a $40,000 maiden special weight test for 2-year-olds on the main track.

Phlash Phelps, the 6-5 post time favorite, raced to the lead in the six furlong test on the main track, but was hounded throughout by another first time starter, Olde Bay. Phlash Phelps fought gallantly to pull away but he could not withstand the furious close of Emotional Stroll and jockey Matthew Rispoli.

Seven of the nine runners in the race were first-time starters, including the winner, who is trained by Graham Motion.

“I just left him alone and he made a nice run at the end. I couldn’t ask for anything more,” said Rispoli, one of the top riders at Penn National, who began his career in Maryland in 2009. “It looked like an even race on paper. Graham just told me to keep him comfortable and make a run.”

The son of Stroll, who won by a head, stopped the clock in 1:12.11 and paid $15.80. Pax Orbis was another head back in third. The first seven finishers were separated by just five lengths.

Motion has three victories in the first four days of the Laurel Park fall meeting.