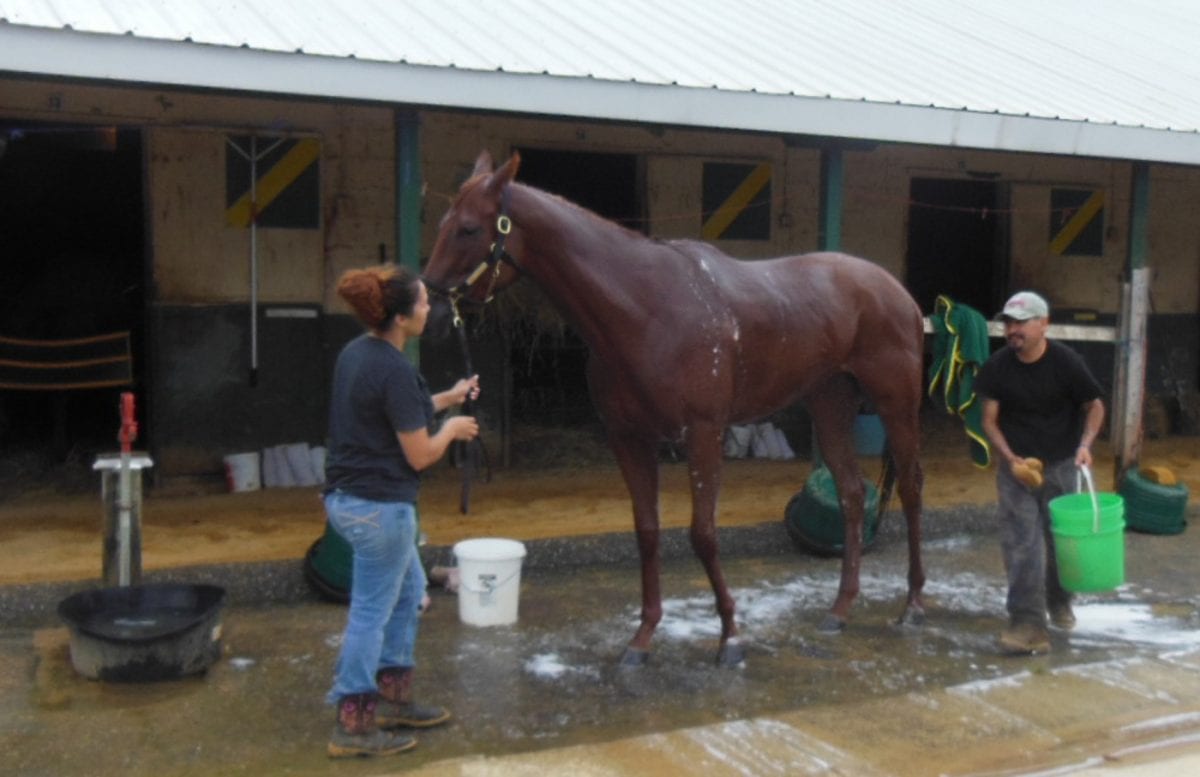 “That’s my big horse,” Xavier Perez says, pointing to the name and number tattooed on his inner arm.

It’s not a surprise that he has a horse’s name on his body; after all, he’s ridden Dance to Bristol to a gaudy seven-race win streak, including three straight graded events.

[boxify cols_use =”2″ cols =”5″ position =”left” order =”none” box_spacing =”5″ padding =”5″ border_width =”2″ border_color =”blue” border_style =”solid” height =”85″ width =”50″ ]To hear a 2-minute clip of Xavier discussing his Smiling Jordan tat, and his plans for a new tattoo… [sc_embed_player fileurl=”https://www.theracingbiz.com/wp-content/uploads/2013/09/XPerezpt3smilingjordanclip.mp3.mp3″][/boxify]Indeed, the Bowie-based daughter of Speightstown will take that streak  into tomorrow’s Grade II, $300,000 Gallant Bloom Handicap at Belmont Park in what should be her final prep for the Breeders’ Cup Filly-Mare Sprint at Santa Anita.

But that’s not the name covering his skin.

Instead, the 25 year-old native of Puerto Rico has the name of another former Bowie resident, Billy Campbell trainee Smiling Jordan, tattooed on his left arm.  Smiling Jordan, now 11, won 28 of 103 races and over $450,000.  Perez steered him to eight of those wins, placing him at the top of the rider’s list of horses with the highest sentimental value.

Part 2 of a series
Amazing and cool are also adjectives that could apply to Dance to Bristol, and to the preternatural relationship between her and Perez.

For now,  the pressure’s off the tandem.  That’s because the four year-old daughter of Speightstown has already done enough to earn a spot in November’s Breeders’ Cup. 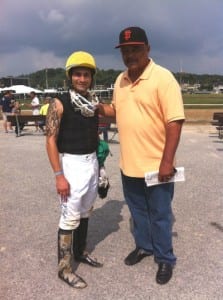 While piloting Dance to Bristol to her impressive skein, Perez has managed to  complete an improbable one of his own.  He’s won three graded stakes in his first three  tries – all aboard her – and he has also won on all three of his mounts at Saratoga.

“I don’t ride any horse differently,” Perez said last week, two days before breezing Dance to Bristol five  furlongs in 1:00 3/5 over the Bowie Training Center oval.  “I like riding every horse. I don’t look at any of them differently. Of course, I love her because she’s Dance to Bristol and she gave me my first  grade I victory.  She gave me my first grade III win in my first graded race and my first Grade II.”

During the seven-race win streak, which includes a pair of allowance races at Laurel Park, Dance to Bristol has performed best at seven furlongs.  She’s won the $200,000 Sugar Maple Stakes at Charles Town, the Grade III, $150,000 Bed o’ Roses Handicap at Belmont Park and most recently the Grade I, $500,000 Ballerina at Saratoga at that distance.

In all three races, Dance to Bristol enjoyed an ideal trip and benefited from patient handling from Perez.

“In the Sugar Maple, she really raced well and she won easily,” Perez recalled. “Then in the Bed o’ Roses, I just sat there until the quarter pole and then I let her run and then got after her just a little bit. She ran seven furlongs in 1:20 and four-fifths, which is really incredible. Then in the Ballerina, she broke good to race fourth and then I moved her on the far turn and I had to get after her when Book Review come after us. But she wouldn’t let her go by, not even after the wire.”

Along the way, trainer Ollie Figgins has been impressed with Perez’s skills and poise. He has rarely given the jockey direction on how to ride  the four-year-old, preferring to let rider and horse sort out the best gameplan.

And although he has been approached  about potentially putting a prominent, Eclipse Award-winning jockey aboard, Figgins maintains that Perez has earned the right to keep the mount.

Perez breezes the filly, but Oscar Mancilla, Jr.  gallops her on most days.

“At this point, [Perez] has done everything right,” Figgins said. ” Xavier always stays cool and calm.  He always seems to put her in the right spot. The seven furlongs always  seems to fit her, but Xavier has always given her the best chance to win. He fits her perfect.”

In fact, during the streak the only time that Figgins and Perez perhaps had any doubts about winning occurred two starts back in the six-furlong, Grade II, $300,000 Honorable Miss at Saratoga.  That day Dance to Bristol had to overcome plenty of trouble to succeed. Dance to Bristol broke well  that day, but was sandwiched between rivals down the backside and checked and steadied in traffic, advanced into the far turn only to find a wall of horses turning for home, found an opening and then rallied to overhaul Classic Point by a neck.

Perez praises the filly for that one.  “A lot of things went against her, but she still won,” he said.

Indeed, under the circumstances, Figgins said he would not have been entirely upset if Dance to Bristol had been beaten that day; he still would have taken her back to Saratoga for the Ballerina if she had
finished second.

“When I saw Xavier have to check her in traffic, I thought she was beat,” Figgins said. “If that had been an allowance race or something, I would not have been worried. But in a Grade II race, when
something like that happens you don’t expect to win. But Xavier didn’t panic. He still didn’t have room on the far turn, but once she got clear she just kept coming. Xavier had to get after her and she responded.”

As for the future, Perez still has untatted skin to cover — and a design picked out.

“I won eight races on Smiling Jordan and he’s got a home on my farm now that he’s not racing anymore,’ Perez said. “But at some point I will get something for Dance to Bristol. She’s a great horse. I am looking forward to riding her in the Breeders’ Cup. She’s already faced the best fillies in the country, except for Groupie Doll and she’s beaten them. She still hasn’t gotten the respect she deserves.”

She’s 2-1 in the morning line for tomorrow’s race, with the main objective several weeks farther off.  A win in the Breeders’ Cup Filly-Mare Sprint would secure Dance to Bristol’s position at the head of the class and almost certainly result in an Eclipse Award in January.

That’ll get her respect — in addition to a spot on Perez’s arm.

Below, Dance to Bristol gallops with exercise rider Oscar Mancilla up, and Ollie Figgins discusses some of the decisions he’s made along the way.