Friday’s opener at Timonium will mark the first day of live racing in Maryland since the end of the Pimlico spring meet on Belmont Stakes day in June. For a number of local trainers, the Timonium meet is more than just another race meet.

For one thing, it provides — at last — the chance to run and win races close to home; no more van rides to Charles Town, Delaware, or points farther afield.  For another, it means the start of the extended Laurel Park fall-winter meet is also close at hand. And it provides an atmosphere that’s second to none. 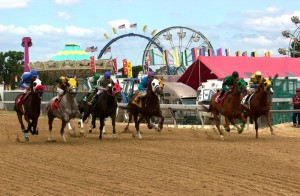 Timonium presents an old-time feel, racing in the shadow of the state fair. Photo by Jim McCue.

“It’s definitely good to have racing back in Maryland,” Bowie-based trainer Damon Dilodovico said. “I think there’s a lot of excitement in our barn and in the entire stable area over here [at the Bowie Training Center]. I might run one or two horses up there and I might even claim one or two, but it’s always such a fun meet. The racing during the State Fair is so different than anything else you see anywhere. It’s always a fun time for the whole family. Of course, you always hope to get lucky and win a race or two while you’re up there.”

The ageless star of his barn, Immortal Eyes, will likely make his next start at Monmouth Park on Labor Day in the $100,000 Icecapade Stakes, but another stakes animal might make an appearance at the Big T. Dilodovico had hoped to run Brooklyn Cowboy, recent winner of a minor stakes at Mountaineer Park on the undercard of the West Virginia Derby, in an allowance race at Timonium on opening day that did not fill.

Another longtime staple at the Bowie Training Center, trainer Linda Gaudet, echoed Dilodovico’s sentiments. Gaudet, who took over the stable when her husband Eddie Gaudet retired at the end of the 2011 campaign, will have plenty of assistance when she heads to Timonium now that daughter, Lacey, who spent much of the summer at Monmouth Park, has returned for the meets ahead in Maryland.

[pullquote]I think there’s a lot of excitement in our barn and in the entire stable area over here [at the Bowie Training Center],” said trainer Damon Dilodovico.[/pullquote]

“I always felt like we could run a horse at Timonium and not have to worry about how the horse would come back,” Gaudet said. “The track surface has always been in great shape, much like here at Bowie. I’m hoping to run a few horses up there, and there’s even a race for [stakes-winner] Concealed Identity up there toward the end of the meet. It had been a while since we had 10 days there, so I’m hoping the horsemen will support [racing secretary] Georganne [Hale] and help her fill the cards. The money’s good right now, so it should not be an issue.”

While Timonium opens on Friday, Bowie-based conditioner Ollie Figgins, III, will be elsewhere when his talented filly, Dance to Bristol, competes in the Grade I, $500,000 Ballerina Stakes at Saratoga. Figgins entered three horses at Timonium on Saturday and plans to run several more there during the meet, and he also intends to make several visits along with his family to the track during the State Fair simply to take part in the atmosphere that only Timonium has to offer.

“I don’t know how many I’ll run there and I usually don’t run any of my stakes horses there and this year all of my two-year-olds are West Virginia-breds, so they’ll stay at Charles Town,” Figgins said. “But I put three in for Saturday and I have several more that can do well up there. It’s always a fun place to go. There are probably going to be days when I’m not running anything, but I’ll head up there with my family and walk around and enjoy the rides and watch some races.” 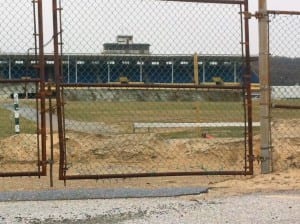 Timonium grandstand, deserted in March, will see plenty of action this summer.

Dilodovico not only enjoys his visits to Timonium, but he also views the 10-day meet as the start to the fall-winter campaign for most of his stable at Laurel Park, which will offer live racing again starting on Thursday, Sep. 19. Dilodovico will look to get several of his runners primed for the big days at Laurel on Sep. 21 and again on Maryland Million Day, Oct. 19.  For him the racing at Timonium is a friendly reminder that the lucrative fall stakes are not far away.

“You know once Timonium starts and ends on Labor Day, the fall meet at Laurel Park is two weeks away,” Dilodovico said. “That’s always the most enjoyable part about Timonium. Even if you don’t have much luck there, you know the big races at the big meet are just around the corner. It would be nice to win a race or two up there or be able to claim a good one that can do well at Laurel this fall and winter, but you always know that horses like Brooklyn Cowboy and Immortal Eyes are going to have some good opportunities once Laurel starts.”