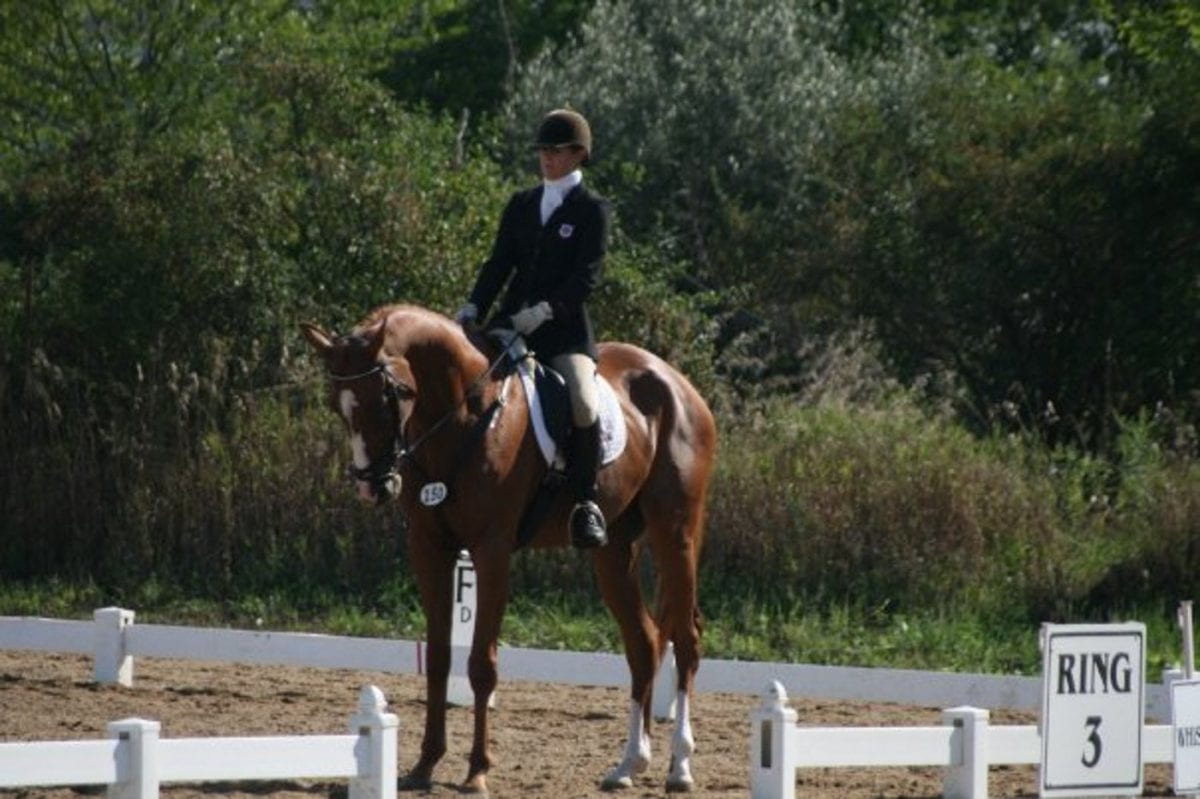 He began life as Rocky Times, and his days on the racetrack were rocky, indeed.  He retired — healthy, sound, and slow as molasses — after a brief career that saw him hit the board once in five starts.

These days Rocky Times is known as Houdini — he’s always been, as you’ll see, something of an escape artist — and maybe the real trick in this story is the way in which two determined women and one untalented racehorse have made something much, much greater than the sum of its parts.

It’s a kind of two-part story, with Kim Clark of Thoroughbred Placement Resources — one of the The Racing Biz’s Partners for Happy Endings — carrying the ball and then handing off to event rider Katie Ruppel.

Kim Clark — “He was a tall, gangly guy with a heart of gold.”

Rocky Times began his life in West Virginia, where he was bred and raised by the nicest old couple you could ever meet, Cecil and Hilda Foster. 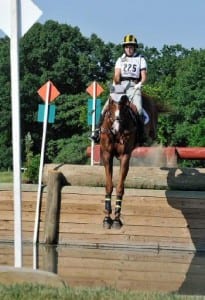 Houdini goes up and over!

Not long after the Fosters contacted me, Rocky came to Leighton Farm. He was a tall, gangly guy with a heart of gold.

One morning, not long after he arrived, I went out to bring him into the barn for breakfast. He was gone. I couldn’t find him anywhere. The other horses in his field were calm, so it didn’t seem like anything had spooked them.  I started looking around the farm, since horses usually go where other horses are, but he was gone. The gate was closed; how did he get out?

Four hours later, we found him — in an upscale subdivision two miles away.  The fences at Leighton Farm, one of which he’d apparently jumped to get free, are four feet high. We knew at the very least we had an athlete — if we could just keep him on the farm.

During training, Rocky showed some potential as a race horse.  He was athletic and covered ground.

But he had not shown any competitiveness with other horses or any speed whatsoever.  These facts, combined with his modest breeding, caused me to enter him for claiming $12,500 going 1 mile and 1/8 at Laurel Park, his first time out. It was far, but since he lacked early speed and didn’t like to be rushed, it seemed like the right move. He finished last but got tired.

We then ran him back for claiming $8,500 going the same distance, and he finished third.  But he got beat seven lengths – so it was a bad third.   Even so, it turned out to be the highlight of his racing career.  He ultimately made $1,180 in five starts.

Oddly enough, he loved race day and the excitement of prancing around in the post parade; he just didn’t get the racing part. I don’t think it ever occurred to him that it was a competition in which he was supposed to beat the other horses. I told the Fosters we should retire him from racing and find him a new job. With his incredible athleticism, I was sure he could be a great show horse, particularly a jumper.

Katie Ruppel — “Getting stuck with Hewie was the best thing that has ever happened to me!”

I bought him [from Kim Clark] as a three year-old as a gift for my boyfriend at the time, who had been generous enough to let me ride his Intermediate horse for a summer.  Hewie — Houdini’s nickname — was to be his thank-you present.

Why Houdini?  That fall, three nights straight he wiggled out of his blanket without undoing any of the straps.  That’s not easy.

Hewie has always been a shy horse. He is a very nervous and spooky type. I took him to a few starter horse trials and he won them all. My boyfriend then took over the ride, and he went to his first recognized horse trial. It was all a bit too much for Hewie, and he literally ran away from the first jump on cross country, through the ropes and back to the trailer.

The relationship between my boyfriend and me didn’t last much longer, and I took a job in Maryland riding and training. My boyfriend said there was no way he was keeping Hewie and to get rid of him. I took him with me to Maryland and kept working on him. 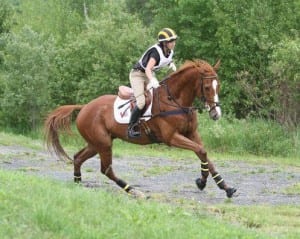 Honestly, I didn’t necessarily believe in him then, but the horse needed a job.  I figured I could sell him on down the line.  In fact, I had two prospective purchasers vet him, and twice he did something minor right before, such as pull a shoe off and step on a clip.  I felt like I couldn’t give this horse away.

I wasn’t sure what to do so with him so I took him up to [trainer] Buck Davidson’s with my other horses for a second opinion.  Buck was the first one to tell me to keep working on this horse and to give him a shot.  Buck really put me on the right path for training this horse when he was younger, and I credit him for helping me turn him around.

The years go by and I kept a keen eye out for the horse that could win it all for me — little did I know he was in my barn already!  I would not consider Hewie the most talented jumper or the bravest horse, but he is incredibly obedient and like most Thoroughbreds, he tries very hard to please me. He has an amazing work ethic and that is what has gotten him this far.

Hewie is now on a little fall vacation after winning the Advanced at Poplar. He is still young at 8 years old and I will just keep letting him tell me what he wants to do. I will aim him at Jersey CCI3* in the spring and we have a great start to our qualifications after this year so I am in a position to pick and choose where to run him in the spring.

Hewie is not only my best Advanced horse, he is my partner and my pet.

We have literally grown up together and he has been with me through all the many changes in my young adult life.

I laugh now.  I think losing my boyfriend and getting stuck with Hewie was the best thing that has ever happened to me!

Note: During the 2012 and 2013 season, Katie and Houdini have been consistent competitors at the Advanced Level of Eventing , including a win at Poplar Place Farm Horse Trials and a second place finish at Rebecca Farm Horse Trials.