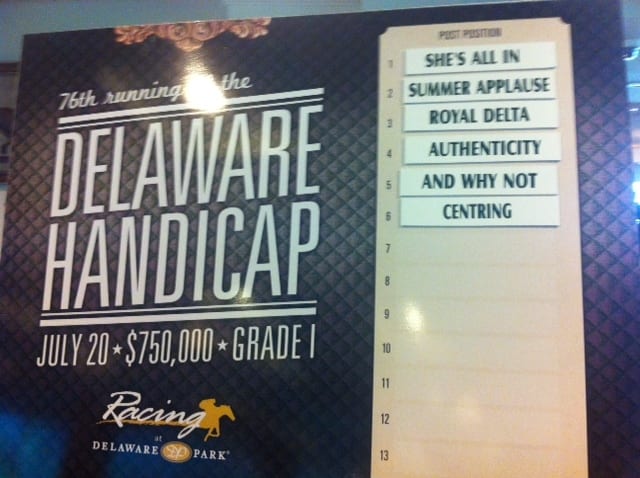 from a Delaware Park release

The defending champion, Besilu Stables’ Royal Delta, tops a field of six entered in the Grade I Delaware Handicap at Delaware Park this Saturday.  The mile-and-a-quarter $750,000 filly and mare summer classic will carry Grade I status for the first-time since 1989.

In her most recent, Royal Delta, the 2012 filly and mare champion, finished second, beaten  five lengths, in the mile-and-an-eighth $175,000 Grade II Fleur de Lis Handicap at Churchill Downs on June 15.  Last year in the Fleur de Lis Handicap, which again preceded the Delaware Handicap, she posted an eight-length triumph.

“She is doing very well,” said trainer William Mott.  “We could not ask for her to be doing any better.  I would love to see her run in the Delaware Handicap the way she ran in the Fleur de Lis last year.  When she runs a good one, she is awesome.  She never really runs poorly and I think it gets to the point where we expect her to win, so when she does not, but still runs well, we get a little dumbfounded.”

In her other two outings this year, the 5-year-old daughter of Empire Maker finished unplaced in the Grade I Emirates Air Dubai World Cup at Meydan on March 30 and won the Grade III Sabin at Gulfstream Park on February 17.

Last year, as part of her Eclipse Award-winning campaign, the Kentucky-bred conditioned by William Mott won the $750,000 Delaware Handicap by a neck.  She concluded her 2012 campaign with a 1 ½-length victory in the Breeders’ Cup Ladies Classic at Santa Anita Park.  She has a career record of 10 wins, four seconds and a third from 18 starts, with earnings of $3,801,126.

Mott is encouraged she won over the Delaware surface last year, but he is cautiously optimistic.

“She handled it,” Mott said.  “I am not sure it was her best race, but she got the job done.  We are planning on shipping down to Delaware the morning of the race.  It worked last year, so I think that would be the best approach this year.”

Helen Groves’ And Why Not is coming into the Delaware Handicap off a second in the mile-and-an-eighth Grade III Obeah Stakes at Delaware Park on June 15.  The 4-year-old daughter of Street Cry has a career record of a win, four seconds and two thirds from 13 starts, with earnings of $144,386.  Although the Kentucky-bred conditioned by Michael Matz does not have a victory at Delaware Park, she still has a record of two seconds and a third from three starts over the course, including a third in the Go For Wand Stakes and a second in an allowance last year.

“She had a little rest over the winter, and when we brought her back she had a real nice race in the Obeah,” said trainer Michael Matz.  “I think a mile and a quarter will be a great distance for her.  I know she has only won one race, and that was as a 2-year-old, but she has been close a bunch of times.  The big thing is the distance.  She needs a lot of distance.  The distance is perfect for her.  There are not too many horses that can get at a mile-and-a-quarter.  The one thing I know is that this filly can get a mile-and-a-quarter and she had a real nice race over the track last time.”

The Delaware Handicap has been an important date on the calendar for fillies and mares since the race was inaugurated in 1937.  In 1953, the Del ‘Cap became the first race in the world to offer a purse of $100,000 or more in the filly and mare division.  Twenty-five champions have placed in the race, including Marcia, Kiss Me Kate, Grecian Queen, Parlo, Open Fire, Cicada, Straight Deal, Susan’s Girl, Our Mims, Late Bloomer, Relaxing and Fleet Indian.

For fillies and mares 3-year-olds and upward

At One Mile and One Quarter