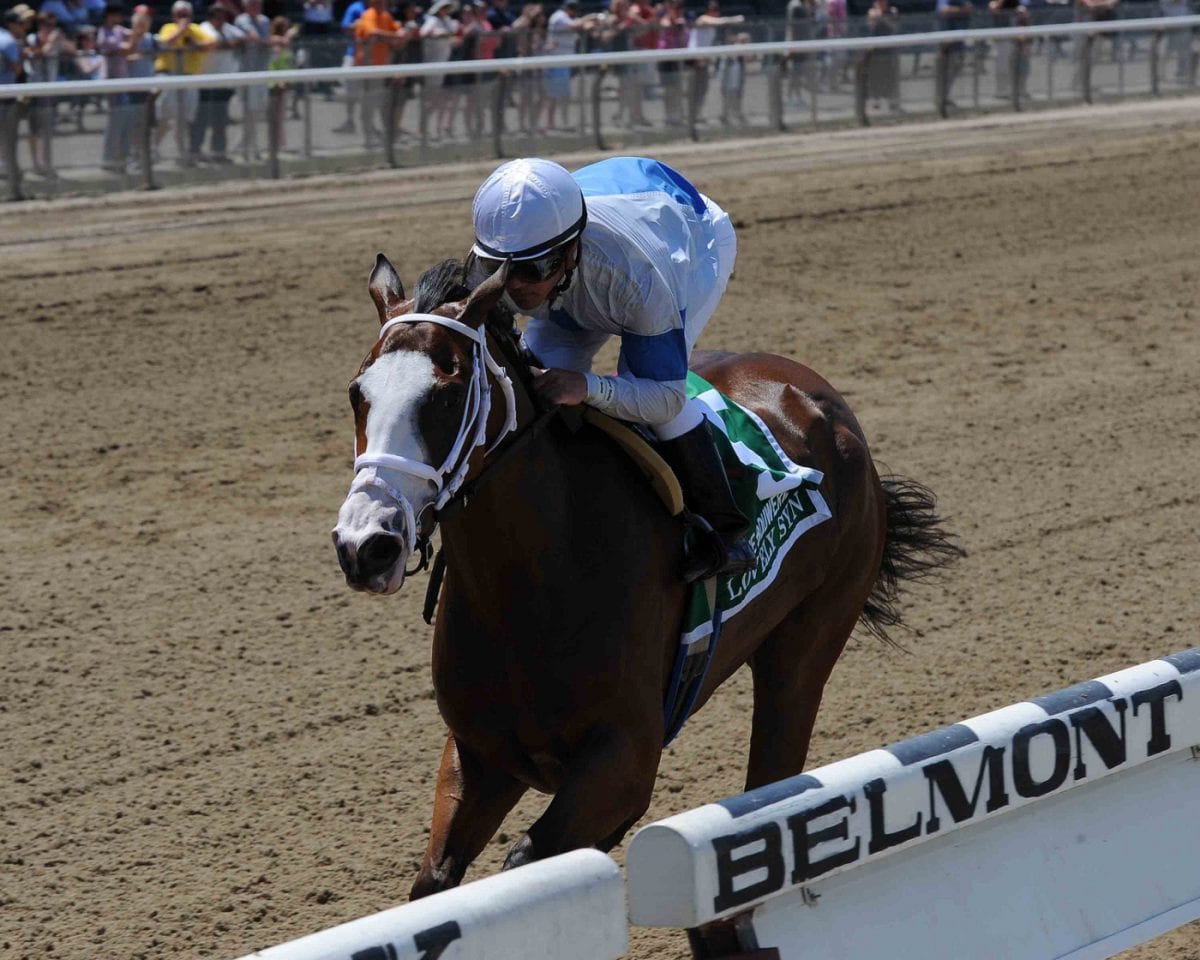 On June 1, the New York-bred filly Lovely Syn kept her spotless race record intact with a 10-length front-running score in the Bouwerie Stakes at Belmont Park. She’d won her four races by a combined margin of nearly 30 lengths.

“We’re having so much fun racing her,” said her owner Michael Parisi after the race, in what had to be an understatement. Parisi, from New Jersey, runs his Thoroughbreds in the name his grandfather established, Joemar Racing Stables.

Less than three weeks later, Lovely Syn was headed to the New Bolton Center in Pennsylvania for surgery after fracturing a sesamoid during a morning workout. The three-year-old with the distinctive face came through the surgery well and is, according to Parisi, going to be fine. Her racing career is over, but she’ll have a career as a broodmare, carrying on the Joemar name. 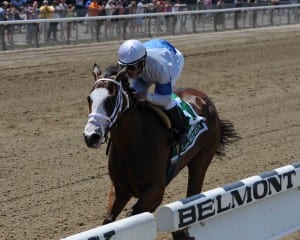 Lovely Syn, here cruising in the Bouwerie on June 1 at Belmont. Photo by Chelsea Durand/NYRA.

Parisi is from the third generation of a racing family that started with standardbreds. His grandfather founded White Birch Farm, the family’s racing and breeding operation; it was Parisi’s father who branched out into Thoroughbreds.  Decisions the family has made since emphasize the challenges facing Garden State breeding

“He saw that that the slots were coming [to New York], and during the recession, when everybody was getting out of the game and giving their mares away, my father was getting in,” Parisi explained.

“Now,” he went on, “you’ve got horses running for sixty or seventy thousand dollars in maiden special weights, and on top of that, you get 30% as a breeder.

“That’s why my father did it, and I just followed in his footsteps. He was a smart man, and I listened.”

Despite the lucrative opportunities in New York, and despite his concerns about the state of New Jersey racing, Parisi keeps his substantial standardbred operation in New Jersey.  The bulk of his racing business is still on the harness side, with 75 foals this year, compared to about 15 Thoroughbreds.

“I’m a third-generation New Jersey guy,” he said. “I was born and raised here, and this is home.”

It doesn’t hurt, of course, that even in the face of challenges the Meadowlands remains among the nation’s preeminent harness tracks, while New Jersey’s once-thriving flat racing scene has been reduced to fewer than 100 days of live racing a year.

And while the loss of a good racehorse is never easy to take, another Parisi three-year-old is getting a lot of attention. His homebred Captaintreacherous, last year’s pacer of the year and champion two-year-old pacer, is the favorite in Saturday’s Meadowlands Pace.

Indeed, he does not, with a record of 13 victories in 15 races, with a second and a third and earnings of more than $1.7 million.

Parisi and his father purchased the colt’s dam, Worldly Treasure in 1996; Captaintreacherous is from the first crop from Somebeachsomewhere, noted by Derick Giwner as perhaps the greatest pacer ever.

Parisi sold Captaintreacherous at auction as a yearling for $250,000, but, as reported in the Daily Racing Form, purchased back a partnership interest in him.

“He’s going to kick some ass,” promised Parisi. Stopping just short of guaranteeing a win and instead saying confidently that his horse will be in the top three, it’s clear that he thinks his horse is going to make it to the winner’s circle. Still, something like superstition, particularly in light of Lovely Syn’s breakdown, kept his optimism in check.

“I’ve been through it before,” he said of losing a good horse to injury. “It’s not the greatest thing in the world to happen, but accidents happen.”

Despite the bad news last month about a prized filly, Parisi acknowledged his good fortune, along with the risks inherent in the business he’s chosen. He’s been in it long enough to know how important it is to savor the good moments, another one of which may well be on tap this weekend.

“I’m just happy Lovely Syn is alive and well,” he continued. “God takes things from you, he also gives to you.”

New Jersey — a state in which the Thoroughbred foal crop has dropped by two-thirds in the last 20 years, to just 186 in 2011 — certainly hopes so.