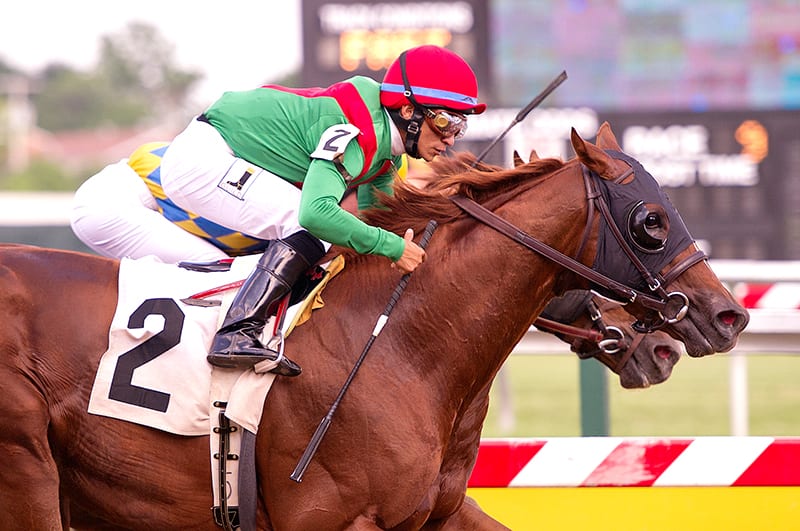 Odds-on favorite Cerro (IRE) led to the far turn, allowed Dynamic Strike to move to his inside, and battled that one the rest of the way before prevailing in the $75,000 Canonero II Stakes for 3-year olds at Pimlico Race Course Saturday afternoon.

“We knew on paper this was a closer race than what the odds said,” Mettee said. “We knew it was going to be a tough race and he got the head bob. I think those first two are pretty solid horses.” 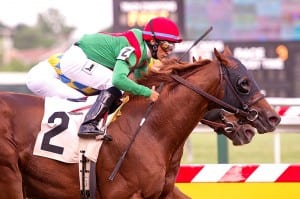 Cerro edges Dynamic Strike to win the Canonero II, the final stake of the Pimlico season.

“He ran very well,” said Forest Boyce, who was aboard Dynamic Strike. “He runs better when he is in striking distance. I had to move early because the other horse was getting his own way early on. I am very proud of the effort and he is just going to get better and better.”

Cerro is now three-for-eight lifetime and improved his career earnings to $109,125. After breaking his maiden in Italy last summer, the son of Mr. Greeley raced at Gulfstream Park and Keeneland earlier this year under the tutelage of Graham Motion and posted a sixth place finish behind Kentucky Derby winner Orb in the Fountain of Youth (G2) and a fourth place finish in the Lexington Stakes (G3).

This was the first official win as a trainer since 2001 for Mettee, who like Phelps is a Towson High School graduate. Mettee, who spent many years running Godolphin’s U.S. division for the Dubai royal family, began his new job at the Fair Hill Training Center on May 1.

“It is nice to get a off to a great start. Stakes wins are hard to come by,” added Mettee, who now has a win and two seconds from three starters this year. “Things are going well. Fair Hill is a wonderful place to train. We have a few nice horses and are going to try to spot them in the right races. I have fond memories of Pimlico. My grandmother lived in Hampden and I used to take the bus here on Saturday’s, which is how I got into racing.”

The Canonero was the last of 25 stakes races carded at Pimlico during the spring meet, which ends a week from today. Three days remain in the stand with live racing also conducted tomorrow and Friday afternoons.