On the map: Notes from the Penn Mile

At which point, an out-of-town trainer with a chuckle, “John Velazquez at Penn National.  Who’d have believed it?  The best riders, best trainers in the business, and they’re here.” 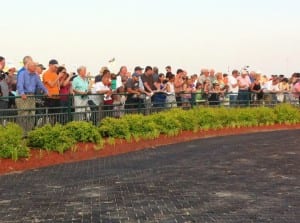 The paddock was crowded for the evening’s races.

[pullquote]Did you bet on your horse, we asked Henry Argueta, assistant trainer of Tightend Touchdown.  “No,” he said.  “The line was too long.”[/pullquote]

Here, and then gone, with the money: Javier Castellano aboard Tightend Touchdown in the Pennsylvania Governor’s Cup, trainer Chad Brown’s Easter Gift (Kendrick Carmouche up) in the Mountainview, Edgar Prado aboard Gary Contessa trainee Rydilluc to take the Penn Mile.

A productive day for the out-of-town contingent, to be sure, but few complaints heard; a big crowd jammed the facility, and wagering was brisk.  Did you bet on your horse, we asked Henry Argueta, assistant trainer of Tightend Touchdown.  “No,” he said.  “The line was too long.”

Tightend Touchdown came within a nostril of the course record when he blazed the grassy five furlongs in 54.62 to take the Governor’s Cup by over five lengths.

Local longshot Kyma, who won this race last year, bore out suddenly on the turn and caused a chain reaction that had major impact on two of the likeliest win candidates, Ben’s Cat and Chamberlain Bridge.  Ben’s Cat, previously making steady outside progress, checked and lost several lengths before rallying strongly to get the show spot; he ultimately galloped out ahead of the winner.  Chamberlain Bridge was done at that point and finished last.

Kyma was disqualified and placed last for the incident.

[pullquote]His name is Easter Gift. It might not be Easter but he gives a gift every time he runs,” declared jockey Kendrick Carmouche.[/pullquote]

Norman Asbjornson ran a big race in the Mountainview, but it wasn’t enough, as Easter Gift drew off strongly to win by a couple.  A jubilant Kendrick Carmouche, who rode Easter Gift this evening for the fourth time in the horse’s 11 starts, chimed in after the race.

“I thought Jeremy Rose (on Norman Asbjornson) was getting the perfect trip with two dead horses sitting in front of him, so I figured that was the horse to beat and I had to get outside of him. I got a perfect trip . . . The horse does a great job. His name is Easter Gift. It might not be Easter but he gives a gift every time he runs.”

Rydilluc made the lead with around a quarter-mile to go and then would not be collared, holding his rivals safe to win the $500,000 Penn Mile by 3/4 of a length.  That caused much celebration by Greg Henzel and John Flanagan — the horse’s two biggest fans, with the exceptions, perhaps, of trainer Gary Contessa and the owners.

The two men had driven down from Albany, NY, to watch and cheer, and they did both with gusto.

Watching from the track apron, Henzel began to make riding motions with his arms when the horses hit the quarter pole.  We wondered if he always “rode” horses he liked.

[pullquote]Penn National is going to be on the map because of this race,” said Gary Contessa.[/pullquote]

“Only this horse,” he said.  “And only because the one time I didn’t do it, in the Blue Grass, he got tired inside the eighth pole.”

No such worries today, and trainer Gary Contessa was exultant about winning what he called “one of my top two races of my career. I’m thrilled. It’s the horse. It’s the race. Penn National is going to be on the map because of this race.”