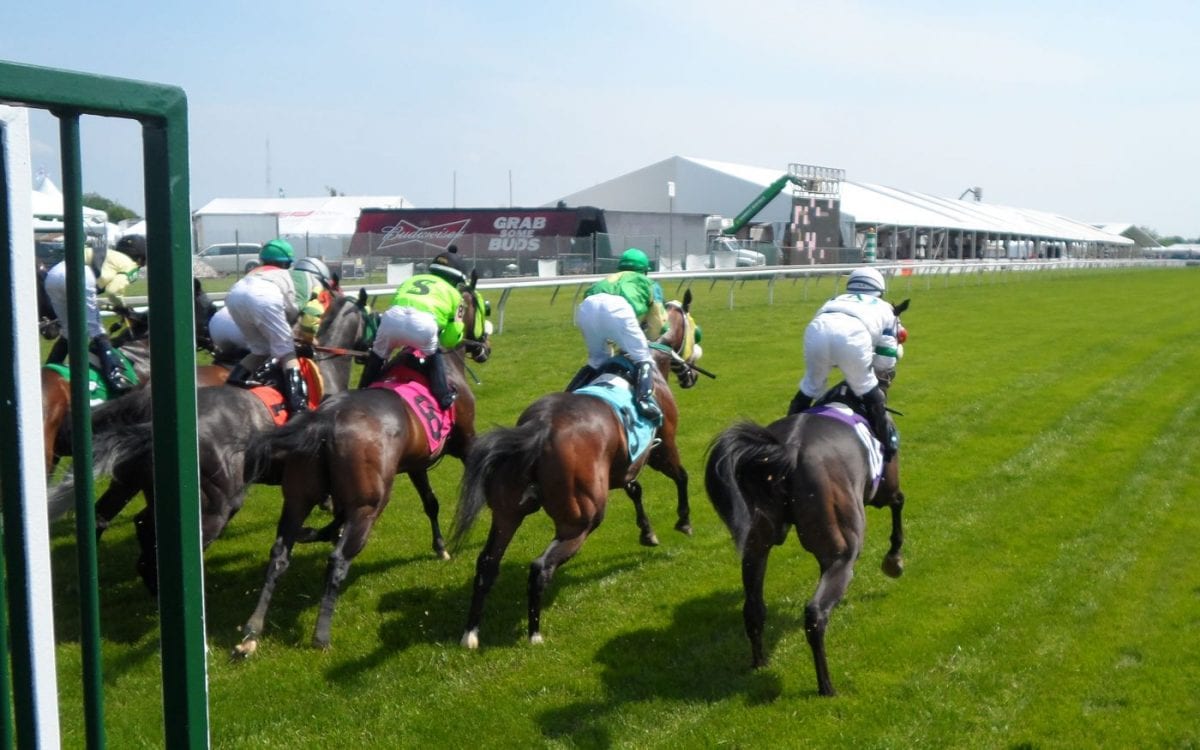 Shortly before 6:20 tomorrow evening, nine horses and jockeys will head towards the starting gate at Pimlico Race Course. The noise of more than 100,000 people will accompany them as they step into small metal stalls, standing patiently until the gates are sprung and they take their first strides in an attempt to win the 138th Preakness Stakes. 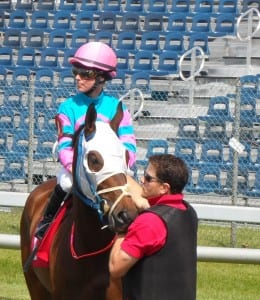 Assistant starter Chris Campitelli has been around the racetrack his whole life; both of his parents are trainers, and he appeared in his first win picture when he was two weeks old. He’ s one of the men who will lead a Preakness starter into the gate.

But while the third Saturday in May is undoubtedly Maryland’s biggest racing day, for the guys on the gate, it will be, in many ways, just another day at the office.

“It’s a long day,” acknowledged Campitelli with a grin, talking between races on Thursday afternoon. “But for the most part, it’s just like any other day.”

“Obviously,” he admitted, “the Preakness is special, and you get a little nervous. But once you get the horse, it’s just like handling any other kind of athlete: they get in the zone and it’s all about focusing on what they’re doing. Their instincts take over.”

Campitelli has worked full-time as a starter for about three and a half years; prior to that, when the Baltimore native was earning a degree in animal science from Cornell, he worked summers at Colonial Downs in Virginia. In high school, he’d work at the barn in the morning before heading to the Gilman School; he walked hots and rubbed horses, and he thought he might like to be a veterinarian.

“I’ve always wanted to work on the track, but I realized that being a vet on the track wouldn’t be something I’d be interested in,” said Campitelli. “If I’m going to be around the racetrack, I want to be working with my own horses.”

His work at the gate doesn’t permit that: assistant starters can’t hold a trainer’s license in order to avoid conflicts of interest, and when Campitelli’s parents’ horses race, he has to be assigned to them in the gate. But with student loans to pay, he needed a steady paycheck after graduation and opted for the gate crew instead of immediately starting to work on a training career.

That regular Pimlico crew will be joined on Saturday by three starters from New York, an addition that Campitelli welcomes.

“It’s kind of challenging sometimes, with a lot of horses coming in from out of town,” he explained. “It’s nice when you have a couple of guys that come in who know these horses and who can give you some extra tips.”

Even without that additional knowledge and experience, Campitelli and his fellow assistant starters won’t be wholly unfamiliar with the Preakness horses. Bruce Wagner, Pimlico’s starter, takes advantage of the Jockey Club InCompass system, in which starters at tracks that subscribe to the service can enter information about a horse’s gate tendencies. Using that information and the knowledge of his crew, Wagner creates a sheet with symbols called “marks” that serve as a resource for the assistant starters.

“They tell us whether a horse likes to go in the stall with the gate open, whether we should use a shank—that kind of thing,” Campitelli said. “It really helps.” 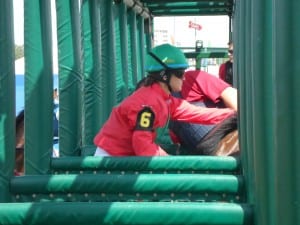 They’re in the gate! Photo by Teresa Genaro.

If one of the gate crew has worked with a horse in the morning at Laurel or Pimlico, Wagner will likely assign the horse to that man in the afternoon. But even with all the information available to the starters, they also have to rely on their own knowledge and instincts.

“It starts when you approach the horse,” said Campitelli. “You try to read their behavior, to see if they’re scared or nervous. You recall the marks, and you try and comfort the horse: talk to him, pet on him, rub on him. It’s a very enclosed space, but the horses get comfort from your being in there and being close to them.”

But as Campitelli notes, not even the most thorough preparation can prevent accidents.

“Horses are unpredictable,” he said, acknowledging that he’s stating the obvious. “Anything can happen. But if everyone is doing his job, that reduces the likelihood of accidents.”

For the fifth race on Thursday, Campitelli and his colleagues move swiftly and efficiently to load the field of 10, and as soon as the final horse is in and standing calmly, the gates fly open. The whole process has taken just a minute or so.

With a field of nine for the Preakness, the load and break will, ideally, be similarly smooth, and then Campitelli and company can do what everyone else at Pimlico will be doing.

“On a day like the Preakness,” he said, “it’s great. The horses turn for home and you’ve got a front row seat. You’re just like everybody else, rooting for the Derby winner, hoping for a Triple Crown.”

The video by Jeff Krulik below recounts a morning with the gate crew.