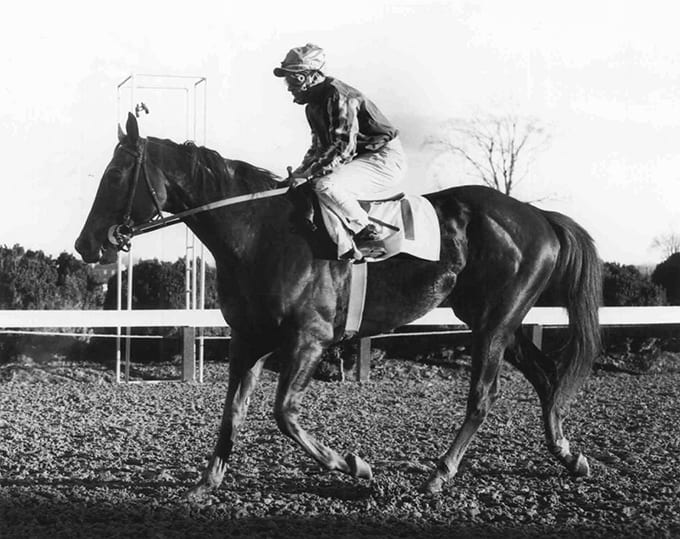 Although the latest edition of the Grade III, $300,000 Pimlico Special tomorrow might lack some of the depth and quality that had previously enabled the race to garner Grade I status, this year’s renewal of the track’s second most recognizable stakes marks the anniversary of three prior famed runnings of the Special.

On paper, today’s edition of the Pimlico Special looks to be a three-horse affair between the talented, up-and-coming Last Gunfighter, former Maryland Million Classic hero, Eighttofasttocatch and multi-millionaire, Richard’s Kid, a talented Maryland-bred runner and former Eclipse Award winner. Local longshots Concealed Identity and Brimstone Island will both hope their familiarity with the Pimlico strip will provide them with enough of an edge to post a huge upset.

Whatever happens in today’s running, his year’s edition of the Pimlico Special falls on the anniversary of three past runnings that helped make the race among the most famous in the nation. Undoubtedly, the most renowned edition of the Pimlico Special occurred 75 years ago, albeit in the fall, when Seabiscuit upset War Admiral in the famous match race in what is clearly the most famous running of the race and one of the greatest races in the long history of the Sport of Kings.

While War Admiral had lived up to his breeding by winning the Triple Crown in 1937 and also taking the Pimlico Special that year, Seabiscuit had become a genuine rags-to-riches story by the time they
met on November 1, 1938. While War Admiral would conclude his career with 21 victories in 26 starts, Seabiscuit would retire with 33 wins in 89 outings, going postward an unfathomable 35 times during his two-year-old campaign and then making another 23 more starts the following year.

While War Admiral was joining an elite group in 1937 by capturing the Kentucky Derby, Preakness and Belmont Stakes, Seabiscuit emerged as one of the top older handicap horses that year by winning 11 of 15 starts. He would then post a 6-4-1 slate from 11 starts in 1938, while War Admiral would win nine of 11 outings. Heading into the Pimlico Special, many expected the speedy War Admiral to dominate the race from start to finish. But he was surprised in more ways than one.

Soon after the bell sounded to start the match race, Seabiscuit eschewed his normal come-from-behind style and gained command early from War Admiral, forcing the reigning Triple Crown winner and horse of the year to become the stalker instead of the pacesetter. When the two horses headed into the far turn they were on even terms and appeared to be traveling as one leaving the three-eighths pole; many onlookers expected War Admiral to take command from there.

But Seabiscuit proved resolute, and he sprinted clear from his — at the time, anyway — more famous rival to a three-length score. Seabiscuit would later capture more stakes and eventually the immense respect of racing fans and historians nationwide.  But the 1938 Pimlico Special was his finest hour, and 75 years later the race remains part of the track’s and entire sport’s legacy.

Fifty years later the 1988 edition of the Pimlico Special was truly special, attracting Alysheba, Bet Twice and Lost Code. Alysheba and Bet Twice had become rivals during the Triple Crown series the year
before, with Alysheba winning both the Kentucky Derby and Preakness before Bet Twice thwarted his bid for Triple Crown glory by easily winning the Belmont Stakes.

When the two returned to Pimlico in the spring of 1988 for the Pimlico Special, many expected a similar result of their previous meeting at Baltimore when Alysheba overhauled Bet Twice late to win the
Preakness. But the outcome proved far different as Bet Twice edged Lost Code to capture the roughly-run edition of the Special – Lost Code’s jockey, Pat Day, filed an objection against the rider of Bet Twice,
Craig Perret, that was disallowed – while Alysheba finished a nondescript fourth.

Alysheba would be heard from again, however, since the Special marked the only time in nine starts that year that he would fail to finish first or second, posting seven wins and earnings of $3.8 million, capped by a victory in the Breeders Cup Classic at Churchill Downs. Bet Twice would only win one other race that year and earned a modest $700,000, well below the $1.9 million he had banked at age three. The Special would prove to be Lost Code’s only setback from seven starts that year.

Ten years ago racing fans watched Mineshaft emerge on the scene as one of the top older handicap horses in the country when he captured the 2003 edition of the Pimlico Special by four lengths for trainer Neil Howard. Mineshaft would later conclude his four-year-old campaign with three straight Grade I races in New York that enabled him to garner Eclipse Awards as champion older male and horse of the year despite not running in the Breeders Cup Classic.

Mineshaft won seven of nine starts and earned over $2.2 million at age four and concluded his career with consecutive victories in the Suburban Handicap, Woodward and Jockey Club Gold Cup. His victory in the Pimlico Special earlier in the year had placed the son of A.P. Indy squarely on the radar and the Neil Howard trainee used that success in the quartet of famous races for older runners to attain a pair of Eclipse Awards and the horse of the year title in 2003.

Granted, there may not be a runner with Mineshaft’s ability in this year’s edition of the Pimlico Special Friday afternoon.  But the connections for each of the seven participants in the lucrative, prestigious race are perhaps hopeful that a victory in the Special will catapult their horse to similar success down the road and enable them to be remembered fondly along similar lines as the winners of the famed Special 10, 25 and 75 years earlier.