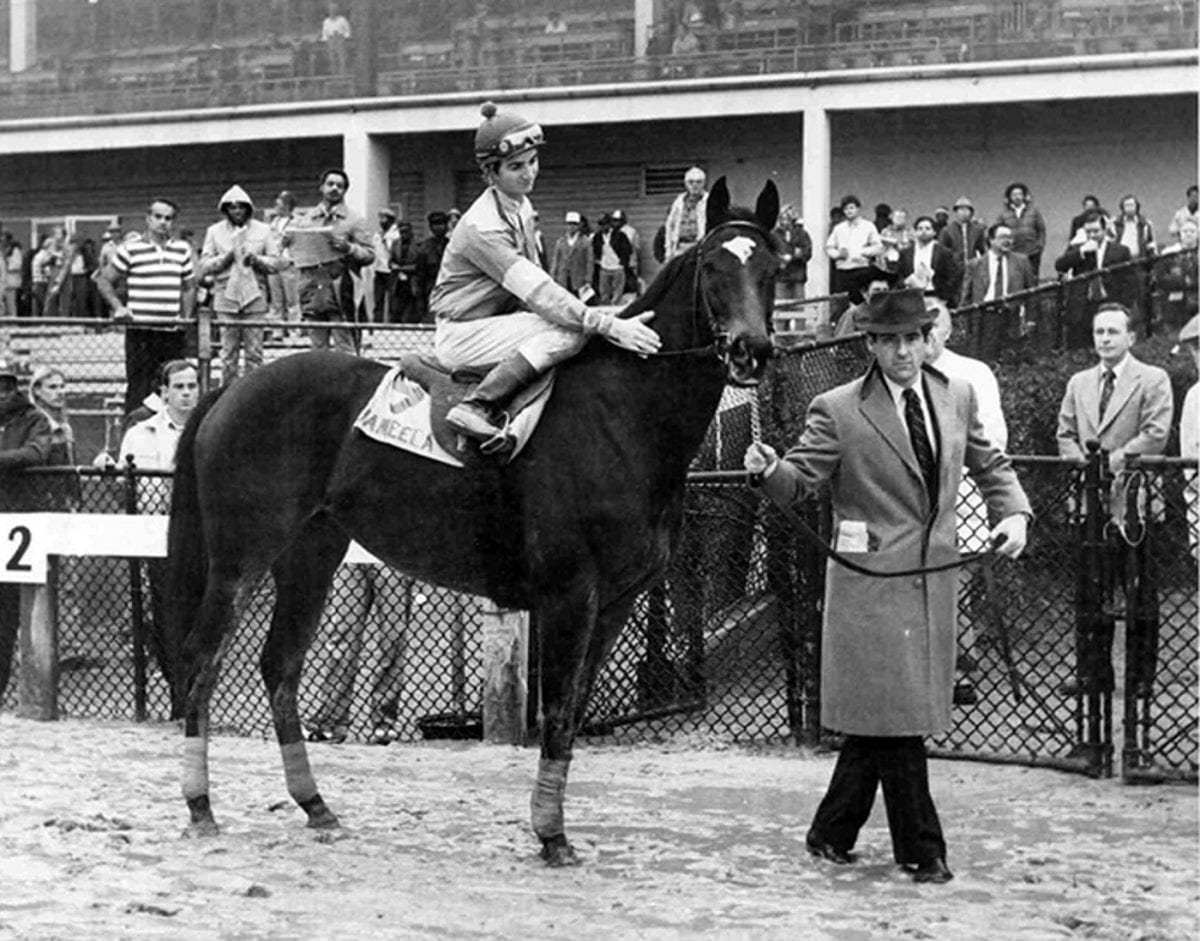 In a series that began yesterday (here), we’re focusing on the inaugural class of the Maryland Thoroughbred Hall of Fame, whose achievements will be celebrated at Pimlico on Saturday, May 11, prior to the first post.

With this evening’s two horses, we’re past the halfway mark.  In this piece, we look at Jameela, the first Maryland-bred to top $1 million in career earnings — she’s the one who broke Find’s career earnings mark — and Jay Trump, one of the great steeplechase horses and already a resident of the National Hall of Fame.

The longtime Maryland breeder left the business in the 1970s, but not before bestowing on the game this dark bay daughter of Rambunctious — who was 26 at the time — out of Asbury Mary, by Seven Corners.  Jameela, Arabic for beautiful, was the last horse to carry the Worthington colors — and how she carried them!

In a career that saw her pass $1 million in earnings and win multiple Grade I events, she also put a hammerlock on Maryland-bred awards.  She earned Maryland-bred three year-old filly of the year in 1979 after winning five stakes and followed that up by winning the next three Maryland-bred older filly or mare trophies.  In the last two of those years, 1981 and 1982, she was Maryland-bred Horse of the Year.

Worthington sold her in 1981 to Peter Brant, and Jameela continued her winning ways, knocking down three more stakes, before an injury ended her career.  In her too brief time as a broodmare, she produced only two foals — but one of those, Gulch, won an Eclipse Award as top sprinter and became an important sire.


Jay Trump was a terrible racehorse — on the flat.

Over jumps, on the other hand, was a different story.  Over jumps, he was truly magnificent.

The modestly bred son of Tonga Prince out of the Bernborough mare Be Trump won 13 of 21 steeplechase starts, after going winless in eight tries on the flat.

Bred by Jan Sensenich, he learned his trade under the tutelage of trainer Bobby Fenwick, but after a victory in the Maryland Hunt Cup — and a disagreement between Fenwick and owner Mrs. Mary Stephenson — Mikey Smithwick took over training duties.  Under Smithwick, Jay Trump five of seven races in 1964, including the My Lady’s Manor, the Grand National, and the Maryland Hunt Cup — the Timber Triple Crown. 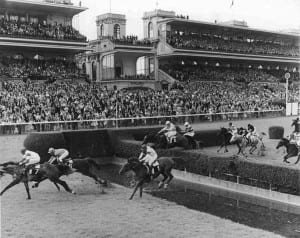 Jay Trump – shown here in fourth – came in third at the Grand Steeplechase de Paris at Auteuil.  Photo from the Maryland Thoroughbred Hall of Fame.

And then came his greatest feat: In 1965, Jay Trump became the first American-bred, owned and ridden horse to win perhaps the greatest of all steeplechases, the English Grand National.

Jay Trump’s racing career ended in 1966 and in 1971, he was inducted into the National Racing Hall of Fame.  He lived to the ripe old age of 32, and his remains are buried at the finish line of the Kentucky Horse Park’s steeplechase course near Lexington, Ky.

(Featured photo is Jameela, Photo by Double J Photography.  At the end of her career, Laurel held a farewell for the great racemare.  In the picture, Cowboy Jack Kaenel is in the irons, as owner Peter Brant leads her in the winners’ circle.)