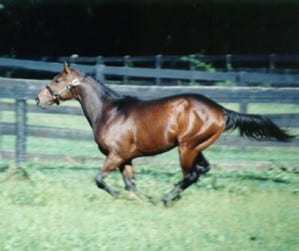 Maybe you liked the looks of Orb.  Maybe you had money on him.  Maybe you were cheering for him as hard as you thought you could in Saturday’s Kentucky Derby.

A bit awkward at the start, far off the early pace, and hung out wide on both turns, Orb nevertheless had plenty of run at the end to clear off and win by a couple of lengths.

“He looked like he was climbing a little the first time past the grandstand,” Josh Pons, who watched from the comfort of home, notes.  “I thought he was struggling with the track, but I guess [Joel] Rosario was just throttling him back.”  He pauses.  “What a confident, courageous ride that was.”

Funny thing, though.  The word that keeps coming up when you talk to them isn’t “joy” or “triumph” or words like that, though they come up plenty.

No, the word that recurs is validation.

Why?  For the answer to that, you have to start at the beginning.

“Grandfather [Adolphe Pons] came down from Long Island and started Country Life in 1933,” Josh Pons is saying.  “Right in the heart of the Depression.”

And, soon, a world war, one that took Adolphe’s sons off the farm.

Depression, war, and Adolphe’s illness completed a trifecta of challenges for the new farm, which nevertheless soldiered on.  “These are examples of perseverance that have really helped me in difficult times,” Josh notes.

The end of the war, in 1945, brought happier days, and on the next New Year’s Day, a homebred filly named Raise You was born.  You may not know Raise You, but you know of her: her son Raise A Native (by Native Dancer) sired a colt named Mr. Prospector, who in time became one of the most important sires in the making of the modern Thoroughbred.

In the meantime, though, Adolphe died in 1951 and turned the farm over to his sons John and Joe, the latter the father of Josh and Mike.

“My dad did this,” says Mike, “with Saggy and Carry Back.”

Saggy, who stood sire at Country Life Farm, was the only horse to beat the great Citation in that horse’s absurd 19-for-20 three year-old campaign.  Saggy won only one other race that year, which goes to show you that in horse racing you never can tell.

[pullquote]Carry Back was a perennial crowd favorite. He was a strong horse… and he kept fans on the edge of their seats with his habit of surging to the front late in the race.” — from the National Museum of Racing and Hall of Fame[/pullquote]

And then Saggy sired a colt of 1958 named Carry Back, and all he did was win the Derby, Preakness, and a passel of other important races in a Hall of Fame career.

Carry Back was also a kind of “people’s horse,” with his energetic Derby rally capturing the imaginations of fans everywhere.  Up to his death, in 1983, he continued to receive fan mail and gifts, according to The New York Times.

That, in its way, was appropriate.  Joe Pons was a people’s person.  “There wasn’t anybody who loved it more, who went to the track more, who pushed more $2 bets through the window than Dad,” Josh says.

He also had his rules to live by.  Among them: “Treat everyone as an old friend” and “Never miss a day of racing if you can help it.”

Mike and Josh wanted the chance to stand Malibu Moon, even if it took a leap of faith.

Malibu ran two races, and by the end of May of his two year-old season, his racing career was over: a win and a second from two starts, both in maiden company at Hollywood.  Not much to build a sire on.

But B. Wayne Hughes was convinced that the horse could be a sire, if given a shot, and so Josh went to Hughes’s California farm and liked what he saw.

The men shook hands, and Josh says, “Mr. Hughes told me, ‘Take this horse back to Maryland and make him successful, so we can take him to Kentucky.'”

Of course, the breeding game doesn’t work that way; sires don’t move from Maryland to Kentucky.  All Josh could offer was his best.

Good enough; back to Maryland they went, human and horse.

The Pons brothers loved the look of their new sire.  They loved the idea of standing a son of AP Indy.

But something else — something in its way stronger — connected the brothers to the horse.

“This is a very superstitious game,” Josh Pons explained.  “And we honor the horses that came before.”

[pullquote]”This is a very superstitious game,” Josh Pons explained.  “And we honor the horses that came before.”[/pullquote]

That something else was this.  Malibu Moon’s dam, Macoumba, was a daughter of Mr. Prospector.  Mr. Prospector was a son of Raise A Native.  And Raise a Native, of course, was a son of that filly of 1946, Raise You, bred by Country Life Farm.

It may seem tenuous, or even mystical, this connection spanning generations based on a link to the ubiquitous Mr. Prospector.  But it’s a game in which feel and intuition play as large a role as facts and figures; these are the lubricants that keep the machinery humming, the raw material that keeps the dreamers dreaming.

And now you’re getting a handle on what validation means.

Grandfather bred a mare who changed the breed.  Father stood the sire of a Hall of Famer and dual classic winner.  And now Orb. 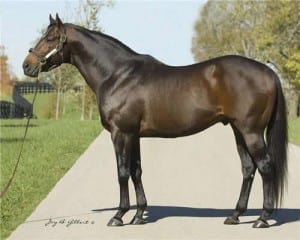 But there’s more.  In breeding, like everything else in racing, a few successes have to make up for a fleet of failures.  For every successful regional sire, an armload fail.  That can induce doubt in the most confident person.  At a recent gathering of old friends, Mike recalls, “I was the only one still doing the same job today as I was in high school — working at the farm.  They’re all doctors and lawyers now.”

Malibu Moon didn’t seem likely to change anything.  He stood at Country Life Farm for just $3,000.  Yet he attracted 101 mares that first year.

“All those smart Maryland breeders who knew how to look at a horse decided to give him a chance once they saw him,” Josh noted, “so they sent some of their lesser mares, their third-string mares to see what would happen.”

What happened was this: Perfect Moon, who won a half-million dollars and a couple of graded stakes, Declan’s Moon, who won the Eclipse Award for top juvenile male, and other notable runners from those early Maryland classes.  What happened, in other words, was the making of a stallion, which is never a one-way story.

Maryland Horse Breeders Association president Cricket Goodall chimes in, “You had a better chance of making a stallion like that in Maryland than in almost any other place.”

“This isn’t just a Country Life story,” Josh says.  “This is a Maryland story.”

“Our job,” says Mike Pons, “is to make dreams come true.  To be a part of this — even if just a teensy part — is such a validation of what you do.  The validation of a lifetime.”

Like Josh, Mike hastens to share credit: Orb’s old-school connections, Mr. Hughes and his vision of Malibu as the next big thing, the crew at Hughes’s Spendthrift Farm where the horse now stands at stud, the prescient Maryland breeders who saw a good thing at a bargain-basement price.  Their grandfather, who lit the lamp in the darkest of times.  Their father who kept the light burning.

“He’s very much present, even though he’s been gone these last eight years,” Josh says of his father.

And maybe that’s what validation means: the successful synthesis of people and horses, of dreams and visions, of today and yesterdays across the years.

Joe Pons had a few other rules to live by.  Here’s one of them:  “Try to get into as many winners’ circle pictures as possible — each one makes you a tiny bit immortal.”

And immortality — whether in the win photo, the pedigree chart, or the back story of a Derby winner — well, that’s its own kind of validation.