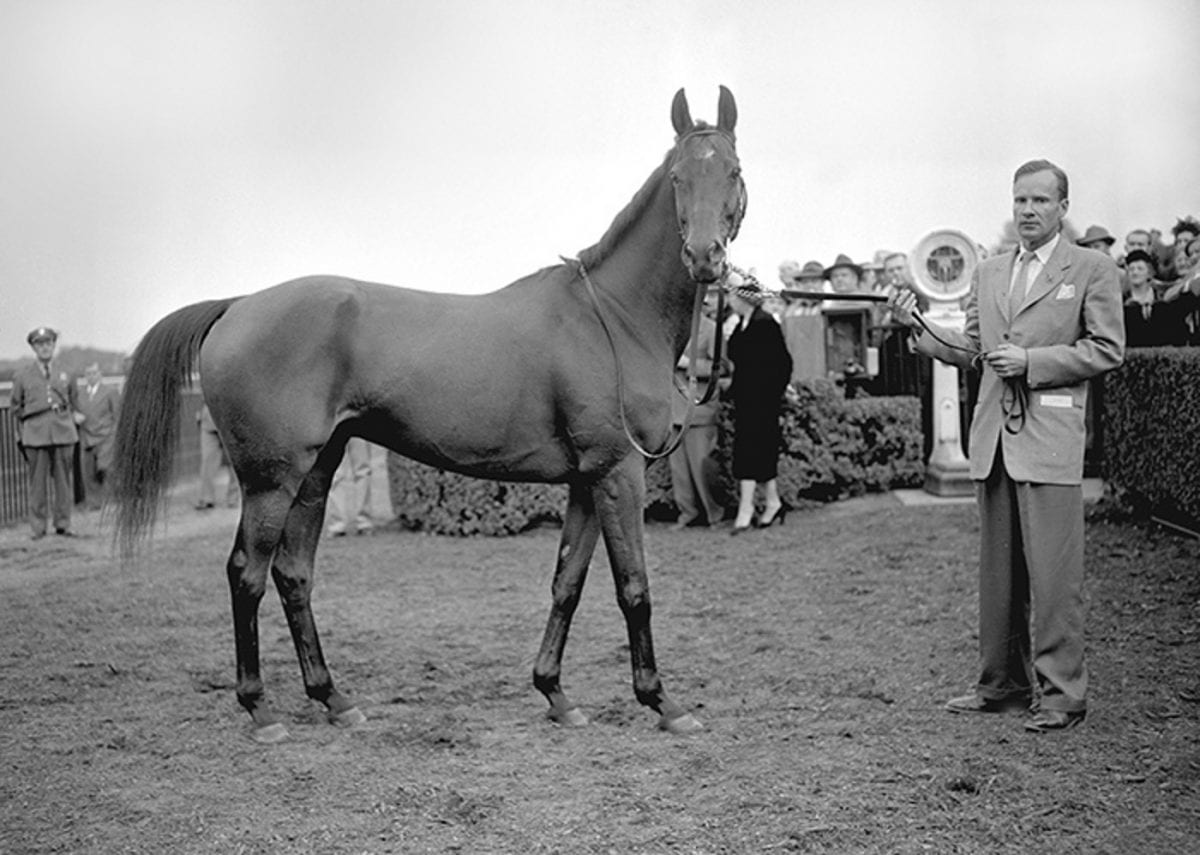 In a series that began earlier today (here), we’re focusing on the inaugural class of the Maryland Thoroughbred Hall of Fame, whose achievements will be celebrated at Pimlico on Saturday, May 11, prior to the first post.

This afternoon’s spotlight horses are both in the National Racing Hall of Fame, so their induction into Maryland’s was a simple matter.

Cigar seemed destined to be a grass horse of no great distinction.  And then suddenly he was something else entirely: one of the great dirt horses in recent memory.

The son of Palace Music, out of the Seattle Slew mare Solar Slew, won 16 consecutive races, including 10 in Grade 1 company, and was twice national Horse of the Year.  In 1995, the then-five year old won all 10 of his starts, finishing his season with a win in the Breeders’ Cup Classic, making him the first undefeated Horse of the Year since Spectacular Bid, in 1980.  He earned nearly $10 million and left racing as the all-time money earner.  He entered the National Racing Hall of Fame in 2002.

Bred and owned by the late Allen Paulson and trained by Hall of Fame conditioner Bill Mott, Cigar was foaled at Country Life Farm in Maryland.  His stud career didn’t work out as planned — he was infertile — and Cigar now resides at the Kentucky Horse Park.

Elkridge was a workhorse.

Bred by Joe Flanagan, foaled at Country Life Farm, and owned first by Thomas Hitchcock and then, for most of his career, by Kent Miller (who also trained him), the gelded son of Mate out of Best by Test, by Black Toney, the bay steeplechase horse started running at three, continued until age 13, and made over 120 starts.  Retirement didn’t agree with him, so after his racing career he returned to work, as a stable pony.

It was a humble job for one of the great jumpers.  Elkridge was twice US champion steeplechaser, won 27 stakes, and earned a spot in the National Racing Hall of Fame in 1966.  He won more stakes in his illustrious career than any other Maryland-bred Thoroughbred, and that’s to say nothing of the 33 additional added-money events in which he placed.

(Featured photo is Elkridge, from the Maryland Thoroughbred Hall of Fame.)