Decision may be move toward program to boost Maryland horse breeding

The MTHA voted Monday to enhance purses for Maryland-bred runners — a step that even a few months ago appeared unlikely, at least in the short term. 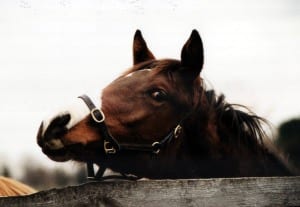 Will this guy run for enhanced purses this year and in the future? Maryland horse breeding may benefit if the state moves in that direction. Photo by Laurie Asseo.

The MTHA-supported program would provide 25 percent purse enhancements to Maryland-bred runners that finish first, second, or third; the enhancement would apply to all maiden races, all allowance races, and claiming races in which a horse was entered for a tag greater than $10,000.

Under the MTHA proposal, half of the enhancement would come from the purse account, while the state’s bred fund would cover the other half.  The proposal would apply only to 2013, with the horsemen, breeders, and racetrack expected to reconvene in October to determine the scope of the program in 2014 and beyond.

The action, reportedly on a 9-2 vote, came in response to a proposal, advanced by a breeding task force convened by the Maryland Racing Commission..  The task force had proposed a 30 percent bonus, payable to horses finishing first through third in all races without limitation as to claiming price; the money would all have come from the purse account; that proposal garnered the support of the Maryland Horse Breeders Association (MHBA).

MTHA sources described the vote as a good step and the precursor to more long-term action.  “I think it’s the right move,” said board member Katy Voss, who had advocated the board decision.  “We’re meeting the breeders halfway.”  She added that moving forward she would support dedicating future additional moneys flowing into the purse account to funding the Maryland-bred enhancements until that program is fully funded, rather than further purse increases.

David Richardson, executive secretary of the MTHA, echoed Voss’s sentiments, calling the decision a “positive step forward.”  He added, “Hopefully, the two groups [horsemen and breeders] can build on this for 2014, 2015, and beyond.”

Some on the breeder side of the table appeared to agree, with more than one describing the vote as a positive first step.  [pullquote]Hopefully, the two groups [horsemen and breeders] can build on this for 2014, 2015, and beyond,” said David Richardson of the MTHA.[/pullquote]

Others, however, were less positive.  Donald Barr, a trainer and former MTHA board member who now sits on the MHBA board, said, “In so many words, they [the MTHA board] told you they don’t care about breeding.”  He, and some others who spoke on background, expressed concern that the MTHA proposal looks better than it really is: that the amount of money offered by the MTHA under the proposal is actually quite small and laden with conditions that will make it hard for the breeders to accept.  Moreover, that it applies only to 2013 — with future years to be dealt with in October — does little to boost breeding, a long-term endeavor, today.

Indeed, an MTHA board member who spoke not for attribution and opposed the action called it “a joke… to provide so little to breeding when the purse account is as large as it is.”  Multiple sources pegged the cost to the purse account, if the MTHA plan were adopted, at around $300,000 for the remainder of 2013; more than $10 million has flowed into the purse account thus far this year.

Yet MTHA board members, reluctant to reduce base per-race purses even if gross purses remain the same,  point out that 2014 will be a challenging year, with numerous demands on the purse account.  Under the 10-year agreement signed by the horsemen, breeders, and racetrack, the track will run 100 days next year, and the horsemen will have to buy any additional days they wish to run; estimates are that to run the 146 days that have comprised the state’s racing calendar in recent years will cost an additional $4 million or more.  In addition, the agreement calls for a shift in the split of takeout, with the track receiving an additional three percent (up to 50 percent of takeout), and the share going to purses declining by a like amount.  [pullquote]”We can recover,” Donald Barr said, “if we don’t drop the ball.”[/pullquote]

The task force is expected to meet in the coming days to discuss the MTHA proposal.  It is unclear how exactly — or to whom — it will respond.   Several members of the task force declined to comment, citing a desire for that group to speak with one voice and a respect for the process now underway.

The task force’s options include seeking official response from the breeders, negotiating directly with the MTHA, or taking its own plan, the MTHA plan, or some hybrid of the two to the Racing Commission for final approval.

Everyone in Maryland racing is aware that the stakes are high.  Breeding has taken a substantial hit in the last two decades, and Maryland has fallen out of the top 10 states by Thoroughbred foals born.  But optimism remains.  “We can recover,” Barr said, “if we don’t drop the ball.”