On Sunday afternoon, Atlantic City Race Course broke a 37-year attendance record when 13,528 people showed up for its six-race card at the little track in Mays Landing, New Jersey.

Opened in 1946, Atlantic City races these days largely to meet state requirements to offer a simulcast center, which is open year-round. Its physical plant is crumbling, though its small backyard, near a picturesque paddock, is grassy and welcoming, with picnic tables, a bar, and betting windows. Just inside the gates, the area is almost enough to make visitors forget the dusty, unpaved, rocky parking lot they’ve traversed to get inside. 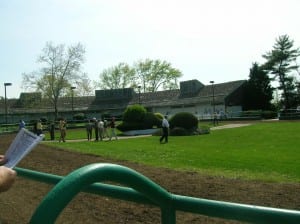 The backyard paddock at ACRC makes for a nice spot to watch the horses and check your handicapping. Photo by Teresa Genaro.

It was not ever thus. The original board of the track boasted Frank Sinatra, Bob Hope, and John B. Kelly, the father of actress and princess Grace. Its Matchmaker Stakes was won by Hall of Famers Susan’s Girl and Gallant Bloom; the United Nations Handicap was inaugurated there, and it was at Atlantic City that Round Table, Dr. Fager, and Fort Marcy, Hall of Famers all, had their picture taken when they won it.

Atlantic City Race Course was sold to Greenwood Racing, Inc. in 2001, the same entity that owns Parx, at which a casino opened in 2006. Maureen Bugdon is its president, and she may also be its biggest fan.

She has a background in marketing, but, she says, “I fell in love with the history of this track. The fact that John B. Kelly was the founder, and that Bob Hope and Frank Sinatra were on the board of directors…this year we put up a Wall of Fame in the grandstand of famous faces at Atlantic City Race Course.

“I can’t believe that in Mays Landing, New Jersey, you have a track with these kinds of personalities who at one time originated it. To me, that’s magnificent.”

Bugdon stood in the winner’s circle on the last day of this year’s meet, enthusiastic about its success and optimistic about the track’s future.

“Last year,” she said, “we broke a 25-year record with over 11,000 fans on Sunday and very similar weather. This year, we were anticipating about the same, maybe if we got lucky a little more than that. I wasn’t expecting 2,000 more.

“That’s pleasantly surprising, and very supportive of our efforts here.”

Fans who love the old track, who remember going as children and who would love to see it return to a semblance of its former self, overlook its current ramshackle countenance and flock to the six-day all-turf meet. They also fear that the valuable land on which the track sits will be too tempting to leave undeveloped.

“Real estate being what it is, development is a variable,” she said pragmatically. “But we have a bill that State Senator Donald Norcross is hopefully going to sponsor and drop that will return the Casino Simulcast Special Fund to this racetrack.”

As Bugdon tells it, when the Atlantic City casinos were granted the right to simulcast horse racing, the CSSF was enacted so that a portion of each bet placed in a casino race book would go into the fund and to the racetracks.

“The fund was meant to balance any negative impact on the tracks,” she explained.

Making clear that she has no objection to simulcasting in the casinos, she pointed out that when the fund was first established, Atlantic City Race Course got 90% of the CSSF. Now, she said, ACRC gets 4%. 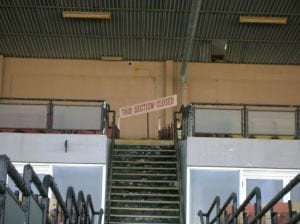 Parts of the ACRC grandstand are closed. Photo by Teresa Genaro.

“It’s a real crime,” she said, “because this track is still negatively impacted by casino simulcasting, although we support it because it’s better overall for the industry.”  Recapturing the CSSF moneys would reportedly put about $1 million annually in ACRC’s coffers.

“We would be able to do so much with that money,” she went on. “The less money you award us, the less racing days we’re able to offer overall because it’s a hit to our budget.”

Still, nothing in Bugdon’s comments or demeanor suggested that the track is going anywhere any time soon — quite the contrary, in fact.

“I think the fans of south Jersey really have a connection with this old racetrack. It’s just beautiful because you see grandparents and parents with children near the paddock, just enjoying the beauty and pageantry of the sport. We’re making memories, and I believe that Sunday’s attendance record is proof that more racing is wanted in south Jersey.”

And, she declared emphatically, that’s what she wants, too.

“So as long as I’m breathing,” she said, “I’m going to be fighting for more days.”

* NB: ACRC attendance is estimated by the track; there is no true turnstile count.