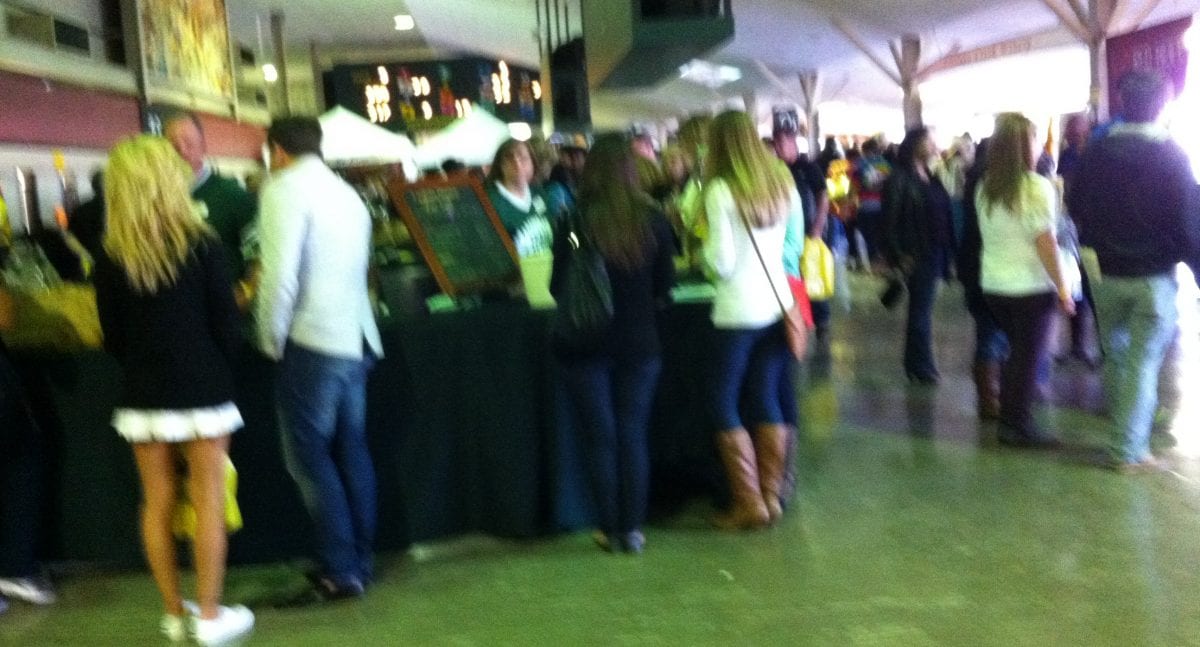 Young, thirsty, and part of a couple.

That, in a nutshell, was the primary demographic at this weekend’s Decanter event at Pimlico.  The event, held for the third straight year at the track, celebrates Maryland wines — and, of course, horse racing.  But mostly wine.

“I came in college to the Preakness a couple of times,” Mark, waiting for his date Nicole, confided.  “But there’s a lot I don’t remember from that.”  He added that it had been years — 20 of them, in fact — since he’d been to the track.  But it seemed apparent that his memory loss was not entirely due to the passage of time, if you know what I mean.

Evan had also been to the Preakness a couple of times.  His date had suggested attending Decanter, and, like a bettor pulling the trigger on a big bet, he didn’t hesitate.  “I figured drinking, gambling,” he said with a “what could go wrong” shrug.

AnnaMaria had traveled from Delaware for the event.  She’d never been to the track before and ticked off what had spurred her to come: the wine, crafts, first time to the track.  “Not me?” her boyfriend asked.  Yes, him, too, it turned out.  But mostly the wine.

Derek and Rhonda were on a weekend trip from their Virginia Beach home.  She’d been to the track in her native Louisiana, while this was a first for him.  But he gravitated directly to the bank of simulcast screens in the Triple Crown Room, like an old pro.  Must be something about men and sports.  Or men and gambling.  “How do you bet?” he asked.

From outside the Triple Crown room, the sounds of acoustic guitar and singing.  “What do you call that kind of music?” an older patron wondered.  “It sounds like a funeral.”

A happy crowd of Decanterers watches the races at Pimlico.

No one else seemed to think so, even when it was Elton John.

Meanwhile, Jesse and Claire took the 95 North junket from Hyattsville.  Jesse seemed fascinated by the past performances in his trusty $2 program.  But by then it was nearly 2 o’clock, and Claire was ready for a glass of wine.

Come to think of it, so were a lot of other people.  The interior of the second floor grandstand was crowded with happy wine drinkers, and as the day wore on, they wandered out to the outdoor box seats to cheer for their chosen horses.  And for wine.  Mostly wine.

Still, it lent a festive “big event” feel to a Saturday in which the racing took a hit after the grass races were shifted to the main track because of earlier rains.  And all it took to get that feel was some creativity, some racing, and some wine.  Mostly wine.