Did Dude set a record? CT to revisit Classic time

On Sunday, in the wake of its biggest race, Charles Town Vice President of Racing Operations Erich Zimny tweeted, “We’ll review final time & fractions of CT Classic this week and see if timer was possibly tripped.  Race may actually be about 2 secs faster.”

He’s right, and revisiting the time is the right thing to do.

Immediately after Game On Dude held off Clubhouse Ride and Ron The Greek to capture the Grade II, $1.5 million race, the first question racing scribes posed to one another in the winner’s circle had less to do with the formful result than with the winning time posted on the infield toteboard.

On a night in which the racing surface at Charles Town was fast and speed-favoring, Game On Dude captured the nine-furlong Charles Town Classic by a length over Clubhouse Ride in 1:52.27. Though Game On Dude is almost certainly the best of the five Classic winners, that time is — by far — the slowest for a winner of this race. 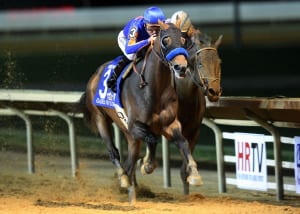 Game On Dude holds off his rivals to win the CT Classic in a time of… well, what was the time? Photo by Coady Photography.

Moreover, earlier in the night Esporon had won the one-mile and one-sixteenth Arbor Day Handicap in 1:46.20, which translates roughly to 1:53 for a mile and an eighth.

The final time for multiple-Grade I winner Game On Dude in the Classic seemed absurdly slow by comparison.

Fellow writers Tom LaMarra, Dave Grening and John Scheinman all took turns questioning the moderate final time and the slow internal splits – the opening quarter was a pedestrian 25.96.  My immediate reaction was that the clocking was wrong by two seconds, especially the final time.  So I decided to watch the race again to take trip notes and to hand-time it.

While many racegoers assume that the timer starts when the gate opens – at some tracks, such as Meydan Race Course in Dubai, it actually does – at most American tracks there is usually a considerable run-up time from the gate to the first pole or beam where the clock starts. At most tracks it is easy to locate the beam in relation to the gate; when the first horse passes the beam the clock starts, and when the winner reaches the wire the timer stops.

My gut feeling standing in the winner’s circle at the track was that the final time was off by two seconds, and my numerous hand-timed clockings confirmed that belief.

After watching the race nearly a dozen times, my final clockings for the Charles Town Classic ranged from 1:49.70 to 1:49.91,

Granted, I am not a professional clocker. But the Classic wasn’t the first race I’d hand-timed, and in the one-mile and one-eighth races at Charles Town it is very easy to locate the starting beam, 48 feet from the gate.  In fact, any divergence in my clockings more likely stems from difficulties stopping the clock at the exact moment than starting it.

Regardless, it is clear that Game On Dude’s effort was considerably better than the posted final time would suggest.  You’d expect fast horses on a fast track to post fast times.

And that, according to my hand-timing of the race, is what Game On Dude did.  In fact, if my average time of 1:49.84 is right, he’ll have set the stake record — just edging out Researcher’s 1:49.86 in the first running of the race.  Maybe my time is off — but probably only by about a fifth of a second or so.

Either way, that’s a result that makes a lot more sense than the posted 1:52.27.