Zimny and Charles Town aiming for G1 status with Classic

Soon after the post-race celebration ended in the winner’s circle following Game On Dude’s victory in the fifth running of the Grade II, $1.5 million Charles Town Classic, Charles Town’s Vice President of Racing Operations, Erich Zimny, took a moment to reflect on the humble beginnings of the race and its potential moving forward.

When Zimny and fellow Charles Town officials first proposed the idea for having the Charles Town Classic in 2009, their primary objective was to have a marquee event in the spring that could attract the top older handicap horses in the country. Initially, they imagined it would take some time to establish, and their longterm goal was to have the race attain Graded status, something Charles Town had never had in its first 75 years of operation.

When Zimny and other track officials began courting horses for the inagural Classic in 2009, their primary target was a Nick Zito trainee named Da’Tara, an otherwise undistinguished runner who posted a wire-to-wire shocker in the Belmont Stakes as Triple Crown hopeful Big Brown floundered. But when Zimny first contacted Zito at Palm Meadows that winter about sending a name horse for the Classic, he was in for a pleasant surprise.

“When we first went to Palm Meadows and talked to Nick Zito about running a horse in the Classic, I think we were just as surprised to hear that he knew about the race than we were that he was looking to send Commentator,” Zimny said. “We were hoping to land Da’Tara and instead he’s talking about sending a horse that had already won several Grade I’s and was considered the best older handicap horse in the country.” 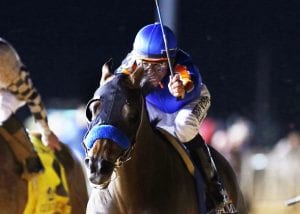 Charles Town is looking for Saturday’s thrilling finish to propel the Classic to Grade I status. Photo by Coady Photography.

Zito did, in fact, send Commentator to the inaugural running of the Classic and in his first try going three turns had to settle for third as Researcher, trained by prominent local trainer and former jockey Jeff Runco, posted a mild upset. One year later, Researcher proved that victory was no fluke when he captured the second running of the Classic, which was worth a guaranteed $1 million for the first time.

But the third edition of the Classic helped push the race into the national spotlight. Granted Grade III designation for the 2011 running, the Classic attracted Game On Dude, Tizway and Acclamation.  While none of them prevailed that night – Duke of Mischief won the race – Game On Dude, Tizway and Acclamation would each win multiple Grade I races over the course of the campaign and were the three finalists in the Eclipse Award for champion older male. The Charles Town Classic was the first and only time the three would meet.

“That third year really put us on the map for good,” Zimny said.  “We were a Grade III going in and we came out of it a Grade II and those three horses were the three best older horses in the country and we had them here. At that point we began to think that maybe in a few years this race could be a Grade I. Now, that’s the goal.”

Last year’s running of the Classic did not draw a stellar field.  Winner Caixa Eletronica, who finished a nondescript fifth on Saturday, did not win a Grade I race in 2012, although he did run well in two of them and win the Grade II True North Handicap at Belmont Park on the Belmont Stakes card. The Charles Town braintrust decided a more aggressive stance was needed to get Grade I horses.

The purse for the 2013 edition of the Classic was bumped to $1.5 million and the winner’s shared guaranteed at $1 million, $100,000 more than the normal amount for winning such a race. Game On Dude, who passed on last year’s race to compete in the $10 million Dubai World Cup, committed early, as did Santa Anita Handicap runner-up Clubhouse Ride; Ron The Greek, the 2012 Santa Anita Handicap hero, also dropped in.

“All along, the two horses we wanted were Game On Dude and Ron The Greek,” Zimny said. “We thought if we bumped the pot to $1.5 million and guaranteed $1 million to the winner, then we had a chance to get them both and we did. When Clubhouse Ride committed, that meant we had the top two finishers in the Santa Anita Handicap coming here. So we had three proven Grade I horses in the race.”

After watching Game On Dude, Clubhouse Ride and Ron The Greek finish one-two-three in a formful renewal of the Classic, Zimny did not speculate whether or not the race would reach its ultimate goal of Grade I status next year. But if all three of them perform well in Grade I stakes throughout the campaign and perhaps reconvene for the $5 million Breeders Cup Classic at Santa Anita Park in November, the Classic seems destined to reach the sport’s highest designation sooner than later.

“Right now, I wouldn’t have an opinion on that,” Zimny said.  “If we get Grade I status next year, we’d be thrilled. I mean, that’s the ultimate goal. If we don’t get it next year, then we’ll have to work hard to get another excellent group back here and then hope we get it the following year. From where we started to where we are now, I think we’re happy with the results.”